Combat Engineer Lance Cpl. Chris Houser, 25, of Providence Forge, Va., pounds nails into a floorboard that will serve as a sleeping area for soldiers living and working out of Out Post 3 in Karmah, Iraq, greatly improving the soldiers’ living conditions. (Sandra Jontz / S&S)

Combat Engineer Lance Cpl. Chris Houser, 25, of Providence Forge, Va., pounds nails into a floorboard that will serve as a sleeping area for soldiers living and working out of Out Post 3 in Karmah, Iraq, greatly improving the soldiers’ living conditions. (Sandra Jontz / S&S) A crane lifts a shower trailer so Marine combat engineers could install it near command headquarter at Out Post 3, in Karmah. (Sandra Jontz / S&S) 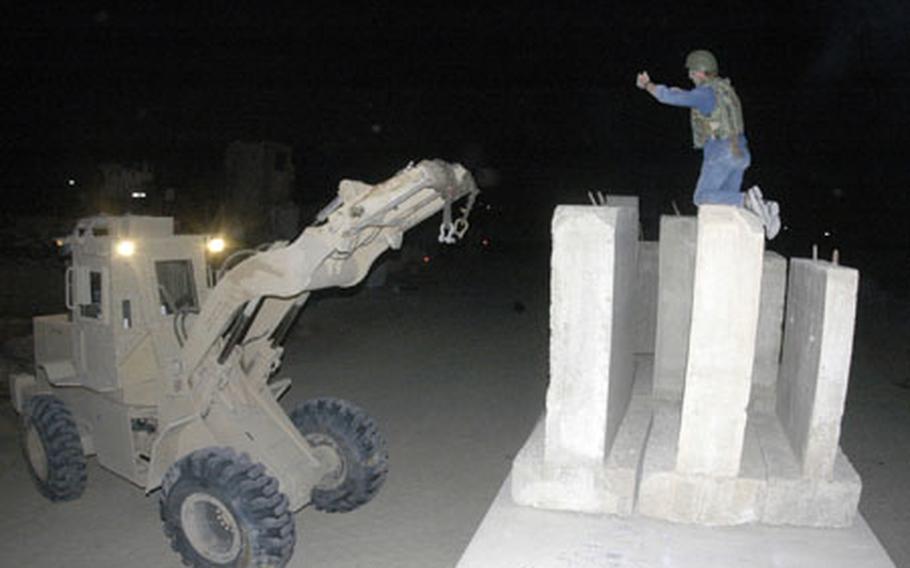 Gerral “Cat Squirrel” Harvey, so named because he can climb really well, hops atop a concrete Texas barrier and guides in a Marine who will hoist the concrete protective barricade from the flatbed truck. Harvey and other KBR employees provide much of the hauling and logistical support for deployed troops. (Sandra Jontz / S&S)

KARMAH, Iraq &#8212; Their humor is crass, but it sustains their sanity in the combat sandbox that is Iraq.

&#8220;Look alive boys, we&#8217;re about ready to go in the devil&#8217;s butt hole,&#8221; Gunnery Sgt. Richard Thomas barked late Thursday night as his convoy of combat engineers and transportation support company Marines from Combat Logistics Battalion 6 prepared to enter the volatile city of Karmah, on the outskirts of Fallujah.

The tension in Thomas&#8217; Humvee was palpable as the convoy navigated from the asphalt &#8220;hardball&#8221; roads that tapered to narrow, pothole-ridden dirt streets and through the city of blind corners and narrow alleys.

In fact, earlier Thursday morning, the Marines and soldiers working and living at Outpost 3 in Karmah had taken small-arms fire and what some suspected was a rocket-propelled grenade attack that fell just shy of the sentry. No one was hit.

&#8220;IED,&#8221; several hollered, referring to an improvised explosive device. Thomas, a 14-year veteran, scrambled to check on the safety of his security Marines posted outside the wire.

A land mine planted in the middle of the road leading to the outpost had detonated. Luckily, it was between two vehicles of an element of the Army&#8217;s 3rd Battalion, 509th Infantry Regiment, which operates out of OP3. Again, no injuries.

&#8220;That was meant for us,&#8221; reverberated among the Marine engineers, who spent several days working at OP3 and earlier had driven the very same road into the camp.

Then, they resumed their work.

The company has been extremely busy since arriving in Fallujah roughly a month ago.

Wednesday, the engineers were called in to reconstruct and fortify an Iraqi army barracks that had been blown up earlier that morning when a suicide truck bomb, laden with chlorine and explosives, detonated inside the Fallujah Government Center compound.

And they still talk about the March 18 insurgent attack that brought down a four-story downtown hotel with ground-level shops, an attack that killed two Iraqi soldiers who used upper levels as an observation post.

The engineers first worked to pull the dead from the rubble, they said. The instability of the building proved too risky to recover any weapons, so they set explosives and blew it up, burying the weapons.

In between attacks, the engineers&#8217; missions run a versatile gamut. Their work includes raising the ground level of OP3 to take it out of a swamp area, using explosives to level an abandoned house insurgents used to hide snipers, building protective barriers and stringing sniper screens, refurbishing camps with suitable living conditions and building roadway obstacles to keep insurgents from having easy escape routes, said the company&#8217;s commanding officer, Capt. Walt Carr.

At OP3, the team of 38 combat engineers constructed a second floor in the one-time mansion now used as the Army&#8217;s 3rd Battalion, 509th Infantry Regiment&#8217;s command center. On its rooftop, they tore down three bunkers made of of thin plywood and rebuilt them using sturdier lumber to withstand attacks, said Staff Sgt. James Guinn, 27, the construction foreman.

The Marines work primarily indoors during the day and use the night&#8217;s darkness for outside construction.

They laugh a lot, in spite of the missions.