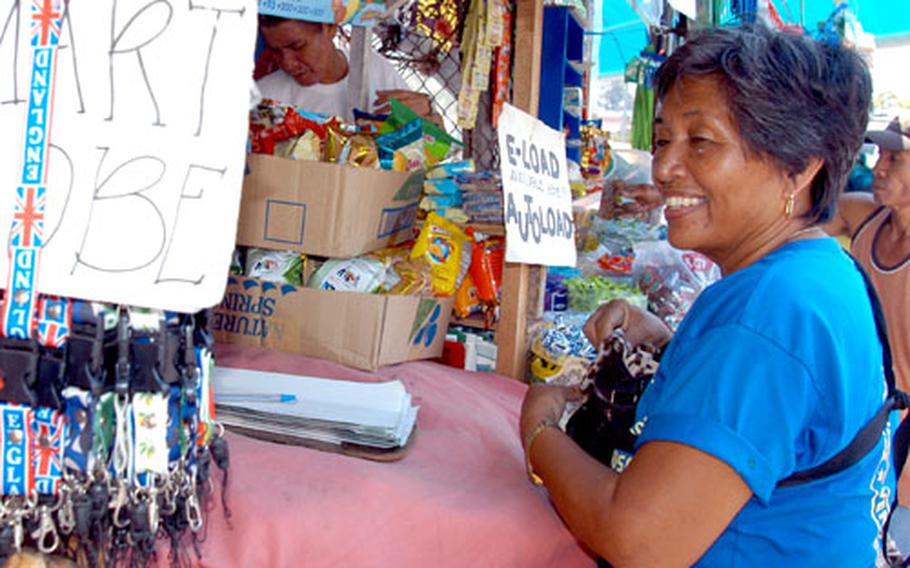 Lolita Espinosa is a street vendor right outside Subic Bay Freeport. She, like other residents in the city, questions whether a rape occurred and said she supports “Americans,” who pump money into the economy when they train at the former Subic Naval Base. (Jennifer H. Svan / S&S)

Lolita Espinosa is a street vendor right outside Subic Bay Freeport. She, like other residents in the city, questions whether a rape occurred and said she supports “Americans,” who pump money into the economy when they train at the former Subic Naval Base. (Jennifer H. Svan / S&S) 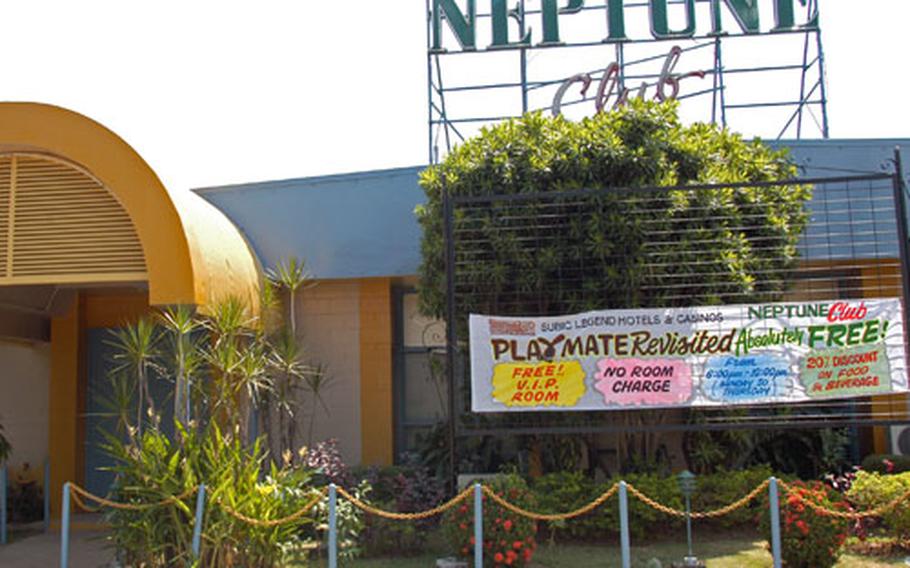 The Neptune Club at Subic Bay Freeport is where a woman last was seen with four U.S. Marines on Nov. 1. The woman maintains the Marines forced her into a van, where one of them the raped her while the others cheered him on. (Jennifer H. Svan / S&S)

SUBIC BAY FREEPORT, Philippines &#8212; The case involving four U.S. Marines accused in the alleged rape of a 22-year-old Filipina likely will go to trial, said the attorney for one of the Marines.

But still to be determined, said Benjamin Formoso, is how many will be ordered to stand trial.

Three Marines, Staff Sgt. Chad Carpentier and Lance Cpls. Dominic Duplantis and Keith Silkwood, have petitioned the court to dismiss charges against them on grounds of insufficient evidence. They are charged with conspiring to commit rape.

The woman alleges the attack occurred on the evening of Nov. 1, while she was vacationing in Subic Bay Freeport, and that Smith raped her in the back of a rented van while the other three Marines cheered him on. All four Marines have denied wrongdoing.

Even if the charges against Carpentier, Duplantis and Silkwood are dropped, Smith, 20, likely would be arraigned, Formoso said.

Smith told Naval Criminal Investigative Services he and the woman had consensual sex, according to the case&#8217;s chief prosecutor, Olongapo city prosecutor Prudencio Jalandoni, pointing to a thick stack of NCIS documents in his office.

But Formoso said Smith&#8217;s statement shouldn&#8217;t be admissible in Philippine court because Smith had no attorney present at the time as required by law.

No cooperation from alleged victimAnother problem in the case is the woman&#8217;s lack of cooperation. Jalandoni said he is building his case against the accused without help from the woman, who has failed to appear at any judicial proceedings and has not made herself available to Jalandoni for questioning. He&#8217;s said he has not talked to her and is unsure why she won&#8217;t participate.

Despite the alleged victim&#8217;s absence thus far, Jalandoni believes he has a strong case, based on the woman&#8217;s initial statements to police, physical evidence and witness testimony that Smith and others carried her out of the van &#8220;like a pig,&#8221; leaving her by the roadside with her jeans pulled down to her knees before heading back to their ship.

The suspects are from the 31st Marine Expeditionary Unit in Okinawa. Marines from the Essex Readiness Group were in the Subic area at the time as part of two bilateral training exercises.

Though Jaladoni allows it would be difficult to prove guilt beyond a reasonable doubt without testimony from the woman, he said he would consider filing a motion to compel her to testify if there is a trial.

The case, he said, has sparked much criticism at home and abroad of the Visiting Forces Agreement, which has allowed the U.S. to maintain custody of the suspects up to now. To stir such a debate and then to drop the case would be disrespectful of Philippine law and government procedures, Jalandoni said.

Residents voice support for MarinesSome Olongapo residents have already made up their minds, and their assumptions illustrate some of the complexities of the case.

Jalandoni said he believes she was too drunk to agree. He said witnesses reported seeing her fall down several times at a nightclub where she met the suspects. Though witnesses testified she was drinking that night, Formoso said the woman&#8217;s blood alcohol content at the time of the alleged incident is unknown.

Olongapo citizens seem to be standing behind the Americans &#8212; who visit the former Subic Naval Base for training and spend money when they do &#8212; rather than the woman, whom they point out isn&#8217;t from the area.

Street vendor Lolita Espinosa said she can&#8217;t believe a rape could have occurred inside a van.

&#8220;If the rape was true, you shout for help, right? I&#8217;m Filipino. (I know) you would shout" if someone tried to rape you, especially since the driver was Filipino, she said.

The case has sparked protests at justice hall in Olongapo but city worker Marilyn Osio, 54, said the protestors were from Manila.

The four Marines are working and living at the U.S. Embassy in Manila with no liberty privileges while the United States maintains custody, Formoso said.

Unclear is who will get custody of the Marines if they are arraigned.

&#8220;Both the Philippines and the United States are determined to pursue justice under due process of law. Philippine sovereignty is firm as we anticipate the issuance of the warrant of arrest against the suspects, which will mark the inception of trial,&#8221; Ignacio Bunye, spokesman for President Gloria Arroyo, was quoted as saying in Philippine media reports this week.

Article 5, No. 6 of the Visiting Forces Agreement states:

The custody of any United States personnel over whom the Philippines is to exercise jurisdiction shall immediately reside with United States military authorities, if they so request, from the commission of the offense until completion of all judicial proceedings.

United States military authorities shall, upon formal notification by the Philippine authorities and without delay, make such personnel available to those authorities in time for any investigative or judicial proceedings relating to the offense with which the person has been charged.

On major crimes, pact a point of contention

The four Okinawa-based U.S. Marines facing rape charges in the Philippines are being held in U.S. custody in Manila under a mutual Visiting Forces Agreement.

The pact is a cousin to status of forces agreements the U.S. government has with more than 100 countries.

The basis for the agreements was formed in the aftermath of World War II and has not changed substantially since, despite high-profile cases of rape, murder, and manslaughter across the globe, according to Defense Department reports.

A frequent point of contention, however, arises when major crimes are committed. In the Philippines, civil protests and demands from some politicians sought to transfer custody of the Marines accused of the November rape to local authorities.

Until a conviction, however, the United States retains custody of accused troops under SOFA and VFA agreements. The host nation can ask U.S. officials to hand over the accused in &#8220;extraordinary cases&#8221; but the decision still rests with U.S. leaders.

According to the Philippine Department of Foreign Affairs Web site, the VFA &#8220;does not grant to any United States personnel diplomatic immunity or any kind of immunity from criminal prosecution for offenses committed in the Philippines. No member of the United States armed forces who commits a crime in the Philippines while participating in military exercises will ever escape justice under the VFA.&#8221;