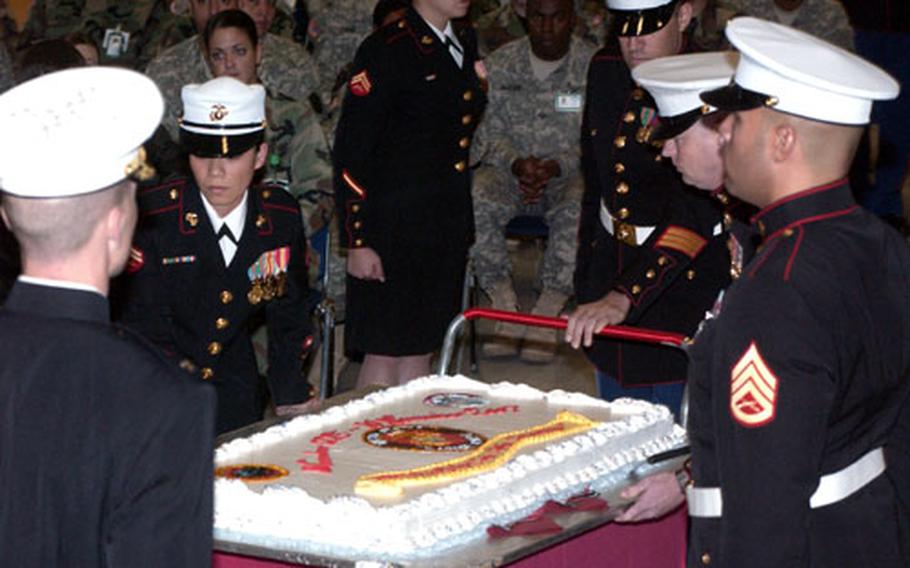 They show a video narrated by the distinctive coarse drawl of actor Sam Elliott, highlighting the Corps&#8217; famous World War I battle at Belleau Wood, France.

They cut a cake with a sword.

Wounded Marines receiving treatment at Landstuhl, including one who was in a wheelchair recovering from a roadside bomb blast, also attended the ceremony, which drew a standing-room-only crowd of soldiers, sailors, airmen and civilians to the hospital&#8217;s auditorium.

&#8220;Having the ceremony at the hospital is our way of showing our wounded Marines here how much we appreciate what they do,&#8221; said Marine Sgt. Scott Bullard, who now is with Marine Force Europe but formerly worked as a Marine liaison at Landstuhl.

A massive cake decorated with the Corps&#8217; eagle, globe and anchor was wheeled up to Marine Maj. Gen. Cornell A. Wilson Jr., commander of U.S. Marine Corps Forces Europe. The cake was then sliced with a sword. Wilson received the first piece. As is Marine tradition, the second piece was sampled by the oldest Marine in attendance and then passed to the youngest Marine in attendance.