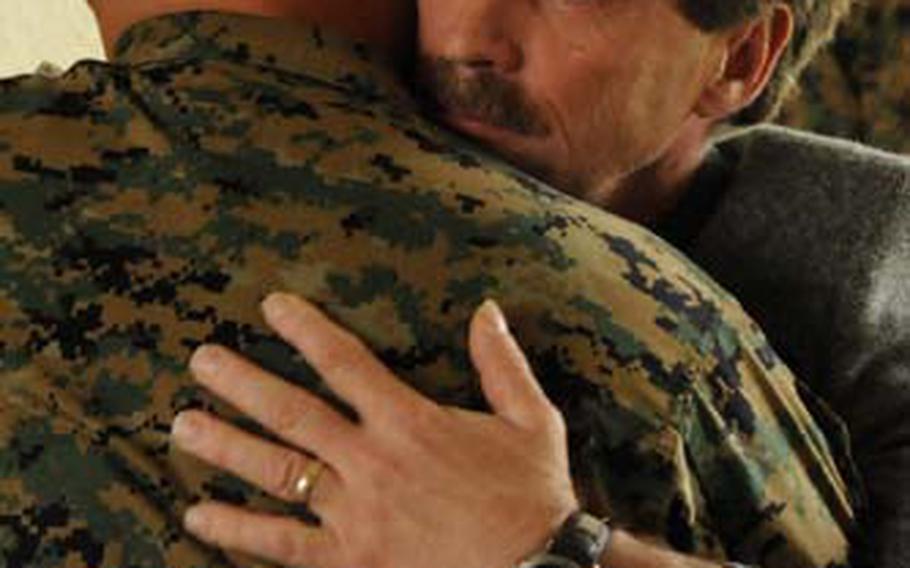 A 3rd Reconnaissance Battalion Marine hugs Michael Ferschke,right, Friday after the memorial on Camp Schwab for his son, Sgt. Michael H. Ferschke Jr., who was killed in Iraq in August. (Cindy Fisher / S&S)

More than 150 Marines, Ferschke&#8217;s parents, his widow and infant son gathered in the chapel to remember the 3rd Reconnaissance Marine killed Aug. 10 in Iraq.

The 22-year-old from Maryville, Tenn., was killed during a firefight in Salah ad Din province. He was credited with saving lives by drawing enemy fire to himself when his recon team entered a building where insurgents had holed up.

The sergeant&#8217;s parents, Michael and Robin Ferschke, and his widow, Hotaru Ferschke, wiped away tears during a short video of Ferschke in training and in Iraq.

Ferschke was posthumously awarded the Bronze Star with V for valor following the memorial service. The battalion&#8217;s commander presented both Hotaru and Ferschke&#8217;s parents a citation and medal.

Afterward, Robin and Hotaru leaned against each other for support as Marines hugged them and thanked them for their sacrifice.

During the service, emotional teammates shared humorous stories about Ferschke &#8212; the tough Marine with the funny-shaped head and big heart.

"Mike is still with us today and will continue to be with us," Capt. Christopher Melton said. "As long as you share your memories of Mike, he will never be forgotten."

Gunnery Sgt. Robert J. Blanton &#8212; recently awarded a Silver Star for his actions during the same fight that ended Ferschke&#8217;s life &#8212; talked about the bracelet he and others wear in Ferschke&#8217;s honor.

"When I first put the bracelet on, I thought I was wearing it to remember Mike," Blanton said, pausing to compose himself. "But then I realized I wear it as a reality check."

The wristband is a reminder to enjoy life, he explained.

Blanton then promised Ferschke&#8217;s wife and son, who was born after Ferschke died, that he would "strive to maintain the tremendous reputation that Mike has set."

Sgt. Alexander E. Tice, the point man on Ferschke&#8217;s team, especially remembers the last time he saw his team leader &#8212; just moments before they entered the building where he died.

For some reason, he said, Ferschke had jumped to the team&#8217;s point to be the first into the building.