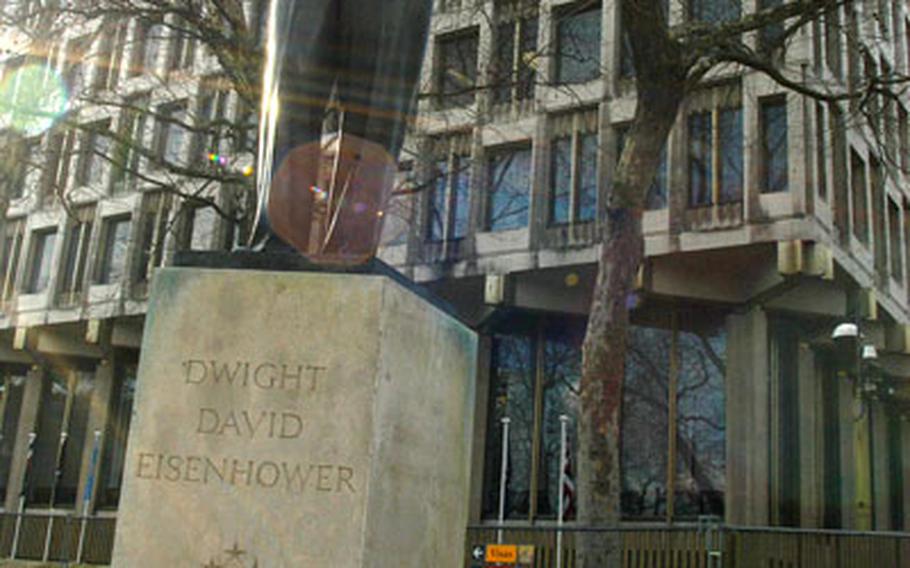 A statue of Dwight D. Eisenhower stands in front of the U.S. Embassy in London. (Bryan Mitchell / S&S)

A statue of Dwight D. Eisenhower stands in front of the U.S. Embassy in London. (Bryan Mitchell / S&S) 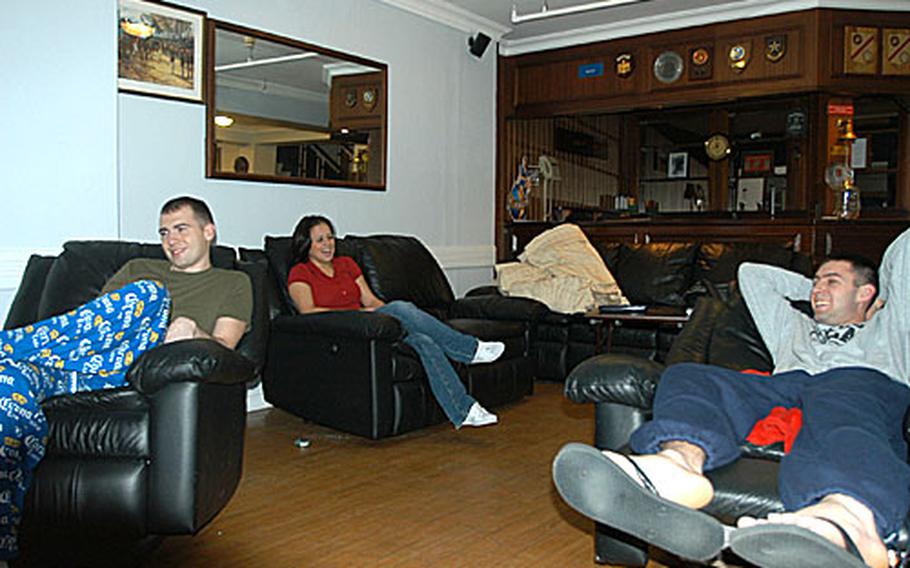 Staff Sgt. James Myrick, 24, Emporia, Va., stands guard at the Marine Corps Post 1 inside the U.S. Embassy in London. Myrick is one of 14 U.S. Marines who guard the embassy. (Bryan Mitchell / S&S)

In the past several years, the 24-year-old Virginia native notched tours in Iraq, Armenia and Cuba before becoming deputy commander of the Marine Corps detachment guarding the U.S. Embassy in London.

Myrick is one of more than a dozen U.S. Marines who work around the clock protecting one of America&#8217;s largest embassies in the world.

While their Marine comrades patrol the perilous streets of Ramadi, Iraq, and train in the heat of North Carolina or Southern California, the Marines protecting the embassy in London interact with officials at the highest level of government and keep fit by jogging through picturesque Hyde Park &#8212; albeit without the infamous Marine Corps chants.

And they enjoy living in a spacious, smartly furnished 21-bedroom home not far from the embassy in the city&#8217;s Westminster district, which boasts some of the most expensive real estate on the planet.

Despite the plush living quarters, the Marines stay true to the Corps&#8217; more austere roots.

&#8220;The biggest thing is having to remember you&#8217;re a Marine,&#8221; said Gunnery Sgt. Michael McGraw, who arrives at work dressed more like a stockbroker than a commander.

The 32-year-old Oceanside, Calif., native is in his second tour as a detachment commander after serving in the same position at the U.S. Embassy in New Delhi, India.

McGraw said protecting the London embassy requires a combination of keeping an eye on peaceful protesters who often assemble at the adjacent Grosvenor Square Gardens, escorting out the occasional unruly applicant whose visa was denied, and good old-fashioned force protection, heightened since the July 7, 2005, London bombings.

The ambassador, who recently hosted the Marines at his home for dinner, said he appreciates their toil.

&#8220;Since coming to London, we have been so impressed by the outstanding young men and women who protect our embassy,&#8221; Ambassador Robert H. Tuttle wrote in an e-mail. &#8220;To have them over for dinner was the least we could do to thank them for their service to our country.&#8221;