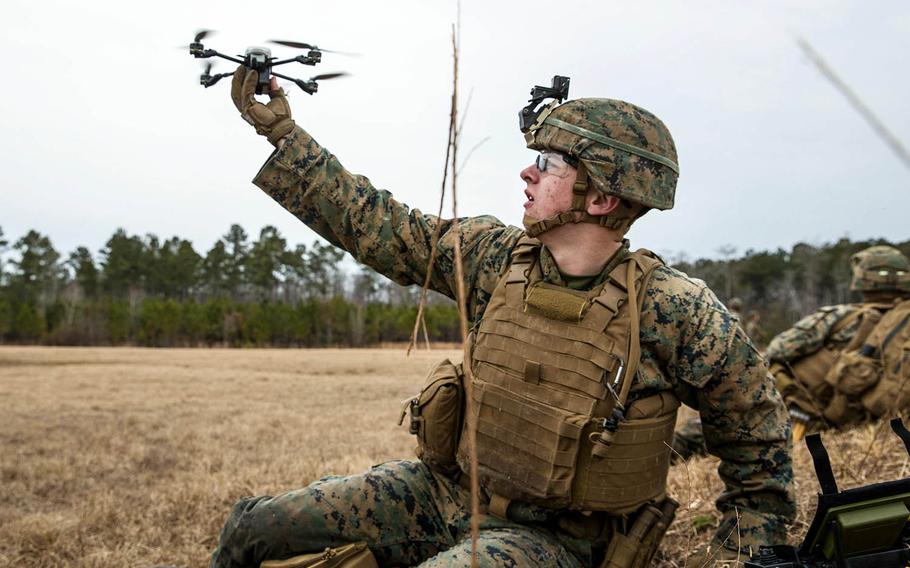 Lt. Gen. Robert Walsh, who leads Marine Corps Combat Development Command, spoke about the new equipment at an event run by the Association of Unmanned Vehicle Systems in Maryland on Feb. 6.

“We need new unmanned systems, fast,” he said, according to the association’s website.

The remote-controlled drones will be fielded at a rate of 200 per month with priority given to deploying units, according to the Defense One news site.

The Marines are going back to their early days of being a highly experimental command, Walsh told the drone experts. Last May, for example, the service brought more than 100 unmanned systems to a beach at Camp Pendleton, Calif., to explore new ways of getting ashore. The arsenal included quadcopters, ground robots and maritime systems, according to the association’s website. Some were for reconnaissance and other were armed.

“The first 20 minutes of what we were seeing was all unmanned,” Walsh said. “When we started with the project, I never would have dreamed any of that, at all … this is happening so fast; it’s changing our ideas.”

Marines have never had quadcopters, even at the company level, but now there will be one for every squad, Walsh said.

To make sure the Marines flying and maintaining the drones don’t get diverted from other tasks, the service is looking at adding technology leaders to squads to work with the systems, he said, according to National Defense magazine.

“I don’t see there’s going to be a battle of the robots in the near future … maybe one day,” he said.

However, he said any new technology that can make Marines more lethal is helpful.

“We need some of these capabilities and we need them now, not 10 years from now,” he said of the devices the service has been testing.

The Marines may be figuring out how to deploy “techno-human” squads, where each unit consists of networked machines, Arizona State engineering professor Braden Allenby said in an email Friday.

That could soon include a variety of robots, both large and small, working alongside warriors, he said.

Artificial intelligence will also be a factor, analyzing threats and opportunities on the battlefield, Allenby said.

“What you end up with is a flexible mixed force that, ideally, is drawing on the different but integrated capabilities of both warriors and machines,” he said.

America’s adversaries are trying to do the same thing, Allenby warned.

“The Chinese and the Russians in particular are both better at some forms of asymmetric warfare than we are … and less concerned about certain ethical aspects of technology,” he said.

Americans may be concerned about robots with artificial intelligence that might kill the enemy without human intervention, Allenby said.

“The Russians are already trying to deploy such systems,” he said.