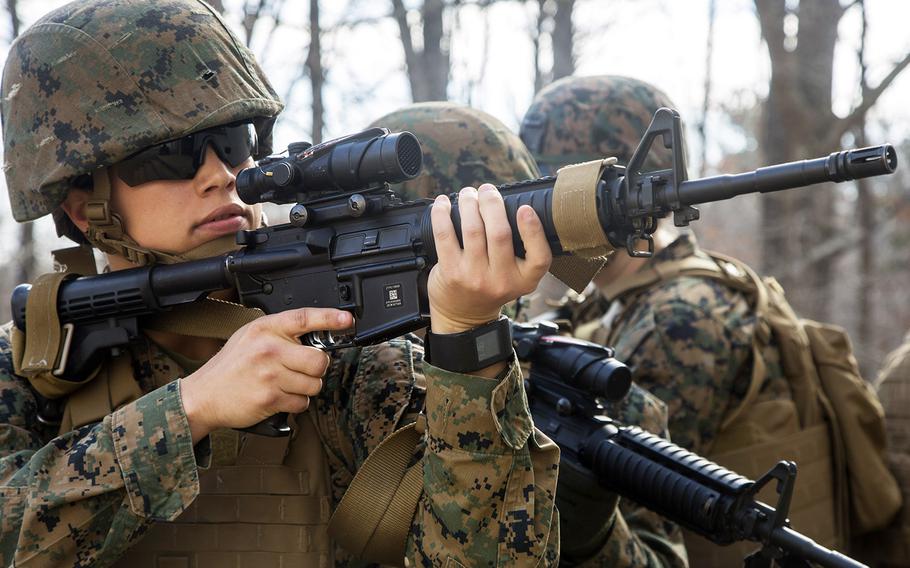 WASHINGTON – Three female Marines, the first women approved to transfer into the infantry, will report Thursday to their new unit at Camp Lejeune in North Carolina, according to Marine Corps officials.

Each woman previously served in other jobs in the Marines and requested to transfer into the infantry after graduating the School of Infantry as part of a 2015 research initiative the Corps conducted to study the impact of gender integration, Capt. Philip Kulczewski, a service spokesman, said Wednesday. All three are enlisted Marines.

They will report to 1st Battalion, 8th Marines and each will serve in a different infantry specialty -- one rifleman, one machine gunner and one mortar Marine, said 1st Lt. John McCombs, a spokesman for the II Marine Expeditionary Force at Camp Lejeune. The Marines did not identify the women by name or rank.

Defense Secretary Ash Carter paved the way for women to serve in traditionally all-male, front-line combat units in December 2015 when he ordered all military jobs and units open to qualified women. Only the Marines recommended against opening all specialties to women, citing gender-integration research that found mixed-gender units did not function as well as all-male teams and women were more likely than men to be injured in front-line combat jobs.

Despite initial objections, the Marines are “on track” in integrating women into previously closed positions, Kulczewski said.

“All 337 [Military Occupational Specialties] are open and currently female Marines are enlisting through all program specialties,” he said. “Regardless of any demographic qualifier, any person who is qualified has the opportunity to volunteer to serve in any occupational specialty or unit.”

The service has had a cadre of senior female Marines in place at Camp Lejeune for three months to help ensure other female Marines are properly transitioned into the infantry, Kulzcewski said.

“This process ensures the Marine Corps will adhere to its standards and will continue its emphasis on combat readiness,” he said.

The Marines expect more women to join the infantry later this year.

There are nine female Marines now conducting initial entrance training at Marine Corps Recruit Depot Parris Island in South Carolina who are scheduled to attend the nine-week infantry school upon their graduation later this month, Kulczewski said. Since they began their training in October, the women have all exceeded performance standards and are expected to graduate from Parris Island, he said.

In comparison, 10 female Army officers have completed the Army’s Infantry Officer Basic Course, but that service has yet to send an enlisted female soldier to infantry training.

It is unclear what impact President–elect Donald Trump could have on women serving in the previously closed roles. Trump has said Carter’s decision was based on “political correctness” and called for its reversal at times during his campaign.

Marine Corps Commandant Gen. Robert Neller said last month that the Marines do not have plans to reverse the gender-integration order.