Marine who died from IED burns remembered on Okinawa 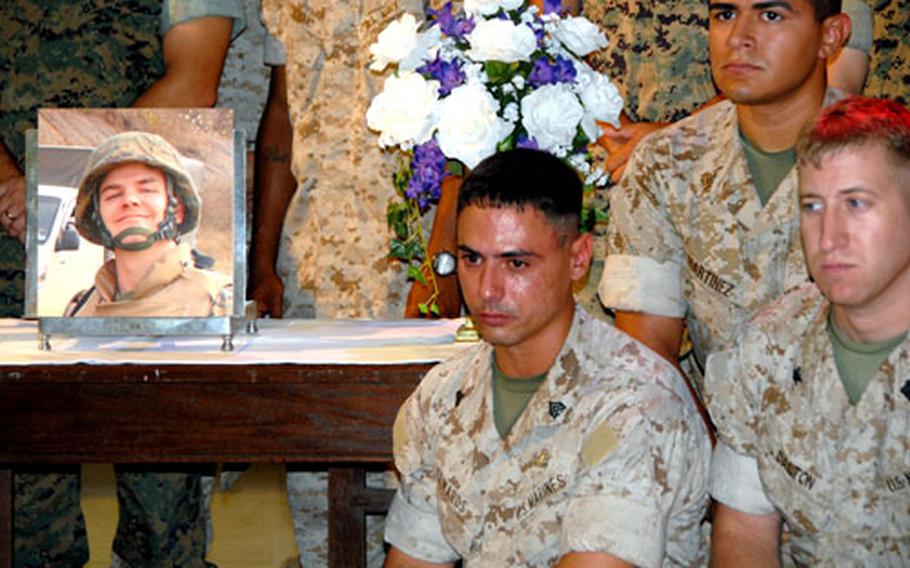 Marines at Camp Hansen on Okinawa hold a memorial service Monday for Sgt. John Phillips, who died after a five-month fight to survive burns suffered in Fallujah, Iraq, in March. During his recovery, Phillips married his girlfriend and was on the mend when infections set in and took his life. (Megan McCloskey / S&S)

Marines at Camp Hansen on Okinawa hold a memorial service Monday for Sgt. John Phillips, who died after a five-month fight to survive burns suffered in Fallujah, Iraq, in March. During his recovery, Phillips married his girlfriend and was on the mend when infections set in and took his life. (Megan McCloskey / S&S) 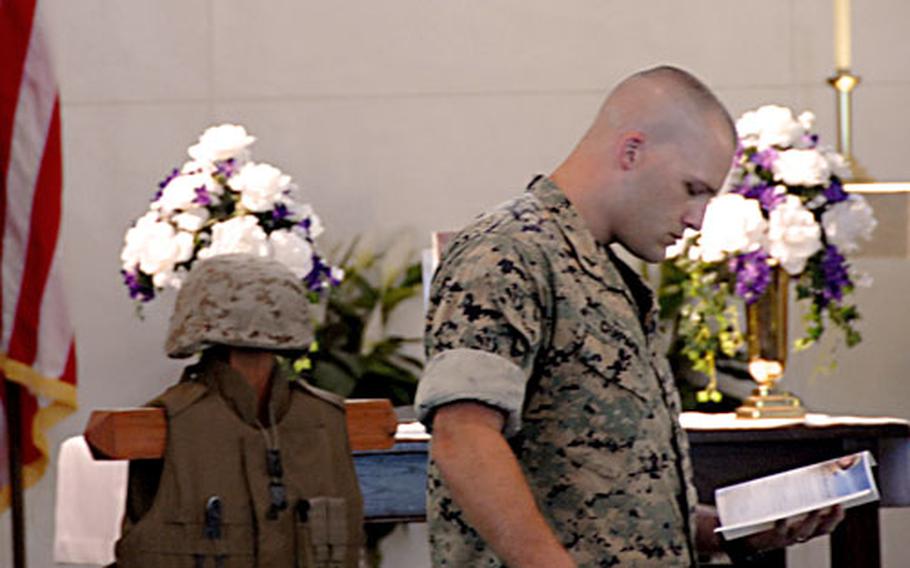 CAMP HANSEN, Okinawa &#8212; Sgt. John Phillips was a man other Marines would go to for guidance because of his honesty and his intelligence, but mostly because he lived life from the heart, those who served with him said at a memorial service Monday.

Marines packed into the chapel on Camp Hansen to honor the explosive ordnance disposal technician, who was from St. Stephens, S.C., and served with the 9th Engineer Support Battalion, 3rd Marine Logistics Group on Okinawa.

After serving as a Marine for almost five years, Phillips got out of the service in 2001, but it only took a few months before he &#8220;heard the call again,&#8221; Menotti said. He was back in the Corps by the end of the year.

Sgt. Michael Chapman, a close friend and fellow bomb disposal technician, told the crowd gathered for the service that Marines who knew Phillips would &#8220;seek his counsel, knowing his mind could find solutions others could not.&#8221;

Phillips had been in Iraq for only a few weeks when on March 7 a roadside bomb hit his vehicle near the gas tank.

Chapman, who was traveling with him, said everything caught on fire. Phillips sustained severe burns on more than three-quarters of his body.

Phillips and Chapman, who also was burned and needed three months of treatment, were taken to Germany and then Brooke Army Medical Center in San Antonio. Although Phillips was unconscious for the first few weeks, he started doing better after about two months and the early prognosis was good, Chapman said.

Phillips was even able to marry his girlfriend, Stephanie Neart, at his bedside.

But not long after, an infection set into his wounds. Doctors amputated his fingers and then his legs, but his organs started shutting down.

&#8220;He was absolutely a fighter. It takes quite an individual to have had made it this far,&#8221; Menotti said at the memorial, describing Phillips&#8217; five-month struggle to recover in Texas.