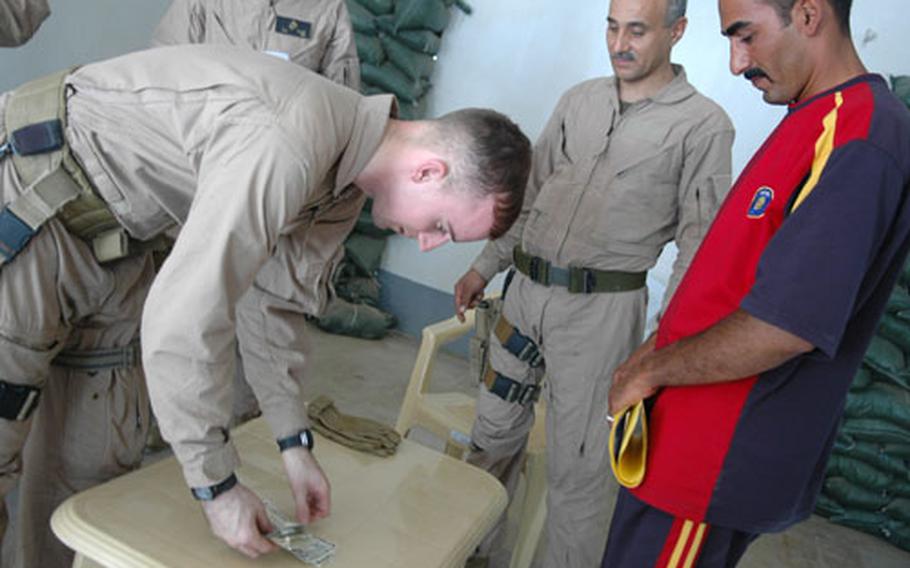 Capt. George "Donnie" Hasseltine, 31, of Meterie, La., pays $920 to a man whose electrical wires were damaged by a Marine Humvee. The weekly "claims day" is held at the Iraqi police station in Saqlawriya, near Fallujah. More recently, some residents have come by to provide tips about possible car bombs in town. (Teri Weaver / S&S)

FORWARD OPERATING BASE RIVIERA, Iraq &#8212; It was just after midnight on Tuesday morning, and Capt. George &#8220;Donnie&#8221; Hasseltine decided to check his e-mail one last time before turning in.

He has a special account set up to take tips from residents in and around Saqlawriya, the tiny town west of Fallujah where he patrols with Company F, 2nd Battalion, 7th Marine Regiment.

His late-night check proved fruitful. A message was waiting in Arabic that said a wanted man, a mid-level al-Qaida operative who lives in the area, had returned home for the night. Hasseltine and a Marine patrol mounted up and found him sleeping, just as the tip had said.

The e-mail was a break through, not just for nabbing a wanted man. It also may signal a growing trust between Fox Company and the residents of Saqlawriya, the officers said.

Since February, Hasseltine and the Marines here have been working to get local residents to point out the bad guys: the ones taking money and protection in exchange for harboring insurgents and their weaponry. It&#8217;s a hard sell. Snitching on an insurgent can turn the informant and his family into targets themselves.

To fight these odds, Hasseltine has dinner with Iraqi residents after sunset, when nighttime skies protect the host from advertising their guests to nosy neighbors. The company commander, 31, from Meterie, La., is learning Arabic. He&#8217;s trying to convince the town&#8217;s council to e-mail him regularly since the group has been too intimidated to meet publicly since last year.

The real breaking point may have come in April, a brutal month for the town and the Marines. On Easter Sunday, a suicide bomber hit a bridge in town, taking out power and water lines and shutting down travel. Eleven days later, a larger bomb exploded at the town&#8217;s police station and market, destroying businesses, damaging the main health clinic and killing civilians.

The next day, a 3,000-pound bomb took out a highway overpass which the Marines had been using as an outpost. Five Marines and a Navy corpsman were seriously wounded, Hasseltine said.

Since then, the Marines have helped to clear the market, added barriers to the area, and are rebuilding the clinic. They also moved into the police station, to bolster security and the police officers&#8217; nerves. At the overpass, the Marine post is being rebuilt; the bridge is not, E&#8217;toile said.

In recent weeks, claims sessions at the Iraqi police station have become another source of information. Once a week, residents can request reimbursements for damage caused by troops. They also can come in to pass along a tip, Hasseltine says.

Last week, one man&#8217;s claim involved a reimbursement of nearly $1,900 for 300 chickens he lost after power was cut accidentally from his coop. Another man&#8217;s claim &#8212; a tip, actually &#8212; was about a bomb hidden in a silver van. The call went out immediately on U.S. and Iraqi military radios, and the police stopped the van within about 10 minutes. The van was empty of explosives, but the Iraqi police detained the driver for questioning.

It was a good sign, but not enough yet, Hasseltine said. But the Marines are slowly becoming part of the community.

A walking patrol Monday afternoon stopped by a small store selling drinks and snacks to ask about the family&#8217;s wedding celebration a few days prior. Before the wedding, the family had asked permission to fire their guns in the air in celebration, an Iraqi tradition.