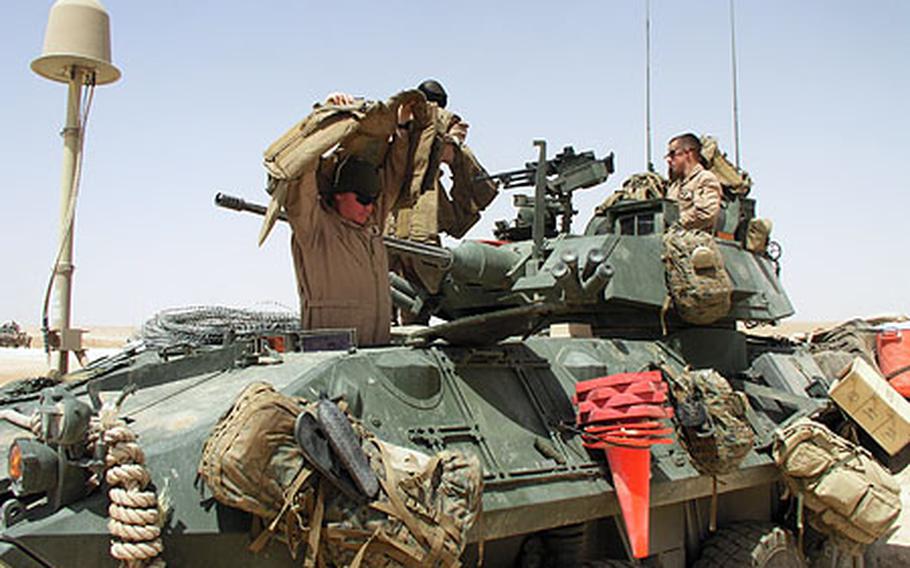 In western Anbar province, Marines of Company C, 1st Light Armored Reconnaissance Battalion, don their body armor before leaving Combat Outpost Rawah for a long-distance raid in the desert. The task force commander is seeking approval to have Marines patrolling area cities do so without helmets and with less body armor than they usually wear. Marines would keep the unused gear at the patrol base and would resume using it if needed. (Franklin Fisher / S&S)

In western Anbar province, Marines of Company C, 1st Light Armored Reconnaissance Battalion, don their body armor before leaving Combat Outpost Rawah for a long-distance raid in the desert. The task force commander is seeking approval to have Marines patrolling area cities do so without helmets and with less body armor than they usually wear. Marines would keep the unused gear at the patrol base and would resume using it if needed. (Franklin Fisher / S&S) 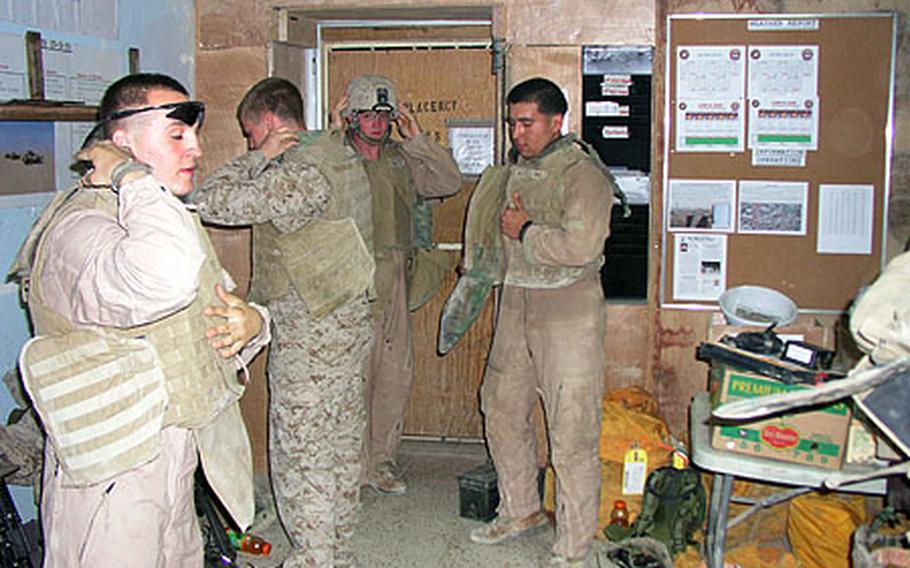 In western Anbar province, Marines at a patrol base in Rawah put on their helmets and body armor, known as PPE (personal protective equipment), before heading out on a patrol through part of the city. (Franklin Fisher / S&S) 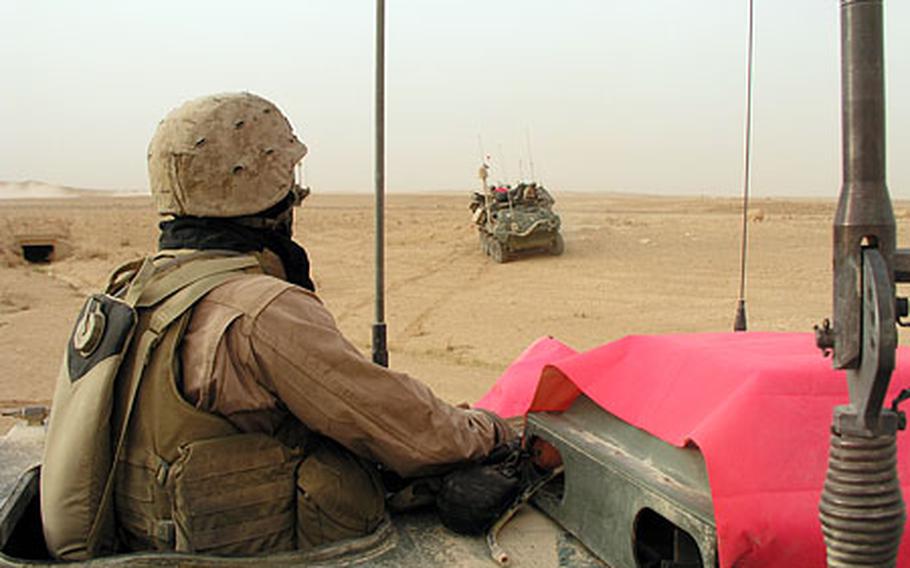 COMBAT OUTPOST RAWAH, Iraq &#8212; The commander of a U.S. Marine Corps unit in Iraq wants to have his Marines begin patrolling without helmets and with less body armor.

But the Marines would have the gear at their local patrol bases and could resume wearing it whenever needed, said Lt. Col. Kelly Alexander, commanding officer of Task Force Highlander, part of Regimental Combat Team-2, which operates in western Anbar province.

The proposed changes apply to what is called PPE, or personal protective equipment.

Alexander said a change to a &#8220;soft posture&#8221; can now be considered because the security situation has improved significantly in recent months. That is especially so in local cities where the Marines work closely with an ever-growing Iraqi police force and where residents have shown a newfound willingness to tip the police to insurgent activity.

The task force, whose elements include the 1st Light Armored Reconnaissance Battalion, is headquartered at Combat Outpost Rawah, near the Euphrates River.

Alexander said he&#8217;s proposed to RCT-2 that the changes be made and that the regiment Tuesday night told him it would seek the OK from higher headquarters.

Were the proposal to get the go-ahead, Marines patrolling the cities would first shed extra plates on their body armor.

Besides the weight they add to a Marine&#8217;s overall load, some armor plates can be a bulky impediment to climbing in and out of light-armored vehicles, known as LAVs. Alexander said he has had plates catch occasionally in the cramped confines of the LAVs and that part of his gear was damaged as a result.

In the second phase of the change, Marines would switch from helmets to &#8220;soft cover&#8221; hats for patrols within the cities. The switch could help in the task force&#8217;s ongoing effort to foster good relations with the local populace, he said.

Like the unused body armor, helmets would be left at Marines&#8217; patrol base.

That&#8217;s in contrast to what British forces in Iraq have done in some instances, wearing soft headgear but also having their helmets with them on patrol.

Thereafter, other parts of the body armor would be removed.

He said the insurgency remains active and capable of attacks. Regimental officials note that the insurgency has launched an offensive in western Anbar in each of the previous three summers.

Accordingly, the Task Force Highlander and other RCT-2 elements are carrying out raids and other counterinsurgency operations in the area in a bid to make it harder for the insurgents to open a summer offensive.

ARLINGTON, Va. &#8212; Security conditions in the western Iraq city of Ramadi have improved so much since coalition forces wrested control from al-Qaida that 80 days have now passed without a single attack, according to Col. John Charlton, commander of the 3rd Infantry Division&#8217;s 1st Brigade Combat Team.

Security has blossomed not only in the city, but in the entire 8,900 square-mile province of Anbar, of which Ramadi is the capitol, Charlton told Pentagon reporters Friday during a remote video briefing from his Ramadi headquarters.

In February, the 6,000 U.S. servicemembers under Charlton&#8217;s command and the 12,000 Iraqi security forces were braving between 30 and 35 daily attacks from the organization known as al-Qaida in Iraq, which had declared Anbar, particularly Ramadi, as the center of its operations.

Attacks now average one a day of fewer, Charlton said.

Some weeks, there are no attacks throughout the province, Charlton said.