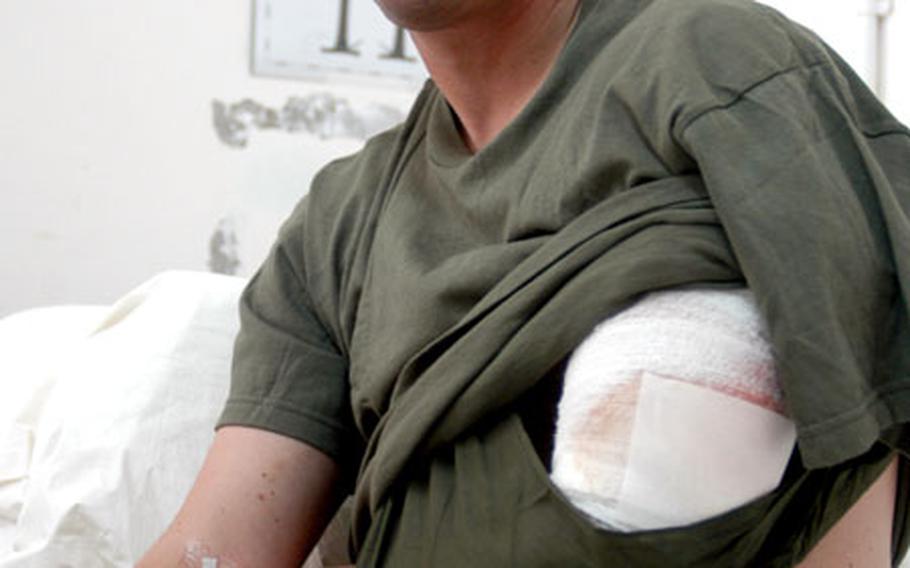 Gunnery Sgt. Brendan Slattery, 31, was wounded Tuesday afternoon in a roadside bomb explosion while patrolling a dangerous stretch of highway between Baghdad and Fallujah. Slattery sustained a shrapnel wound to his left arm, but should rejoin his unit in about a week. (Sandra Jontz / S&S)

That face now is seared into his mind, just like the hot piece of shrapnel from a roadside bomb that burned into his left arm Tuesday afternoon.

&#8220;I wasn&#8217;t scared. It pissed me off. Pissed off was my first reaction,&#8221; Slattery said Wednesday while recovering at a field hospital near Fallujah.

Slattery, leader of 5th Platoon, Weapons Company, 3rd Battalion, 8th Marine Regiment, knew something was not right when he spotted the orange-and-white Iraqi taxi creeping along Main Service Road Michigan about 4 p.m. Tuesday. Usually the taxis zip up and down the highway.

Then, he noticed a man standing on the side of the road. At first, there was nothing unusual about the man, clad in a red-and-white checkered headscarf and traditional long-sleeved, white garment that goes to the ankles.

But the man had something in his hand.

Slattery pointed, wanting to alert the track commander and the driver of the Amphibious Assault Vehicle to what he&#8217;d spotted. But before he could utter any words into the radio, an explosion went off.

Just a day earlier, during a nine-hour patrol along the same stretch of highway, Slattery spoke of memorizing everything about the 25 miles of MSR Michigan that he and his Marines patrol every day.

Sometimes they have to sit back in the rear and just wait to hear about a Marine&#8217;s status, one of the hardest things to do, he said.

At least they are in the same country and the same time zone.

Slattery said when he called her late Tuesday night Iraq time to recount the events, she began to cry, fearing the worst. She didn&#8217;t believe it was only his left arm that was injured.

The injury is not severe enough to remove Slattery from Iraq. He&#8217;ll remain hospitalized for about a week and then return to his unit.

&#8220;I&#8217;d rather it was me than one of my guys,&#8221; said Slattery, still groggy from the anesthesia that put him under earlier in the morning so doctors could scrape out remaining shrapnel from the wound.