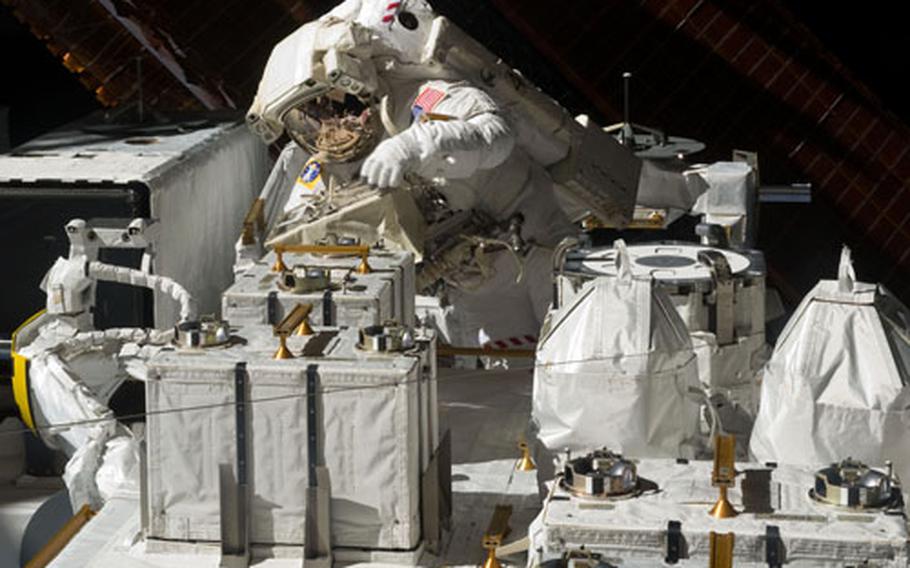 Astronaut and Navy Cmdr. Christopher Cassidy, STS-127 mission specialist, handles the Japanese Experiment Module-Exposed Facility during a 15-day mission in July. Cassidy and other crewmembers have met servicemembers and family members at military bases in Japan throughout the week. (Courtesy of NASA)

YOKOSUKA NAVAL BASE, Japan &#8212; From a physical standpoint, no human has been farther from today&#8217;s battlefields than astronaut and Marine Col. Doug Hurley.

In other ways, there is far less separating him from a deploying servicemember.

He minimizes any stress he might have undergone before completing his 15-day trip in July as part of NASA&#8217;s STS-121 mission to the International Space Station &#8212; but he carefully considers how his family might have felt about him taking yet another dangerous mission.

Hurley also understands what it means to lose his comrades.

While he says he holds the utmost respect for servicemembers on the ground in combat and can&#8217;t imagine what it&#8217;s like to lose someone in a battle, a national tragedy had him grappling with the same questions that some ground warriors face.

An astronaut since 2000, Hurley worked with the crew of the Columbia space shuttle who lost their lives in 2003 while returning to Earth.

Nevertheless, Hurley says he cherishes the opportunity he has had to serve his country with both the Marine Corps and NASA.

The tour is sponsored by Armed Forces Entertainment and Morale, Welfare and Recreation, as well as by the local base commands.

Hurley says that growing up, he always had a love of airplanes and space. When his combination of test piloting skills and an engineering degree put him in position to apply for a job with NASA, he seized the opportunity.

Of the thousands who apply, only eight to 15 get selected per class, Hurley said.

Cassidy spent 10 years as a Navy SEAL and earned a Bronze Star with valor, along with a presidential unit citation, for leading a nine-day operation at the Zhawar Kili cave complex along the Afghanistan-Pakistan border. Cassidy deployed to Afghanistan two weeks after 9/11.

Cassidy, Hurley and Marshburn all made their first trips to space in July, when they retrieved Japanese astronaut Koichi Wakata from the International Space Station and dropped off American Timothy Kopra. The mission also included five spacewalks.

Like many astronauts before him, Hurley said it changed his perspective on life.