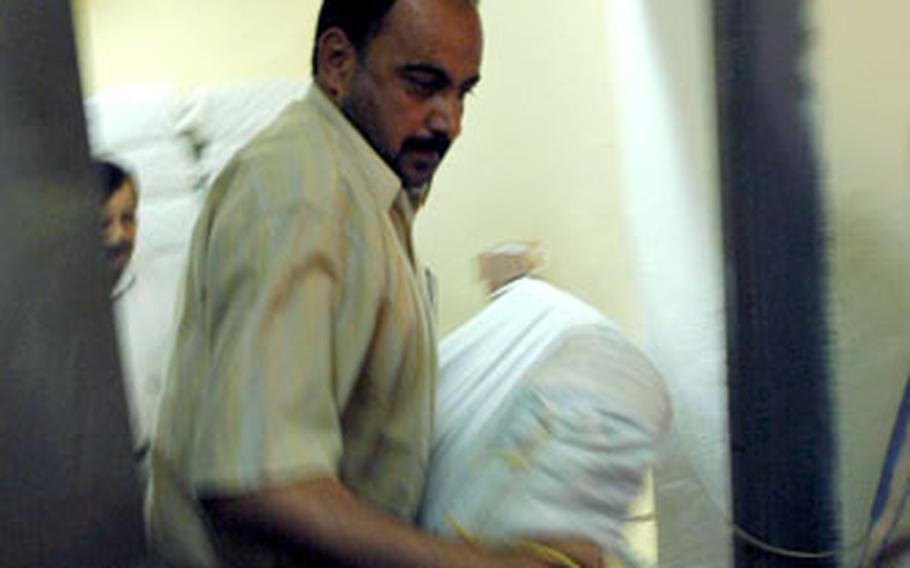 HADITHA, Iraq &#8212; Nestled behind the cement barriers and razor wire on a Marine base inside this city lies the hub of the region&#8217;s financial sector: a lone bank.

The Al Rasheed Bank, a branch of a national Iraqi bank, provides the only formal financial services in western Anbar Province. It opened earlier this year as a way to provide the most basic services to this dusty and dangerous insurgent stronghold.

And unlike many banks in Iraq, this one actually has money in the vault &#8212; with the help of U.S. Marines, who provide the security for convoys that bring cash out from Baghdad.

While Iraqi banking officials in Baghdad determine when and how much money to send to the Haditha branch, U.S. troops provide security for convoys bringing the sacks of money out here, past Fallujah and Ramadi and along some of the country&#8217;s most dangerous roads.

Perhaps the bank&#8217;s most important function is providing payment for Iraqi security forces.

On one recent afternoon, Maj. John Bilas went to the bank to help pick up several sacks of cash totaling $800,000, stacks of money that will be used to pay the monthly salaries for a brigade of Iraqi army soldiers.

Several months ago, Bilas had to travel to Baghdad to cash a large payroll check, a long and costly mission fraught with security threats. Troops are often reluctant to call ahead to ensure the bank can cover the large check for fear that insurgents or criminal will stage an attack or robbery.

Today, Bilas can safely call ahead to check on the Haditha bank&#8217;s cash supplies and then drive to it from his post about 25 miles away at Camp Al Asad.

Bilas said that although Marines provide security for the cash run, the Iraqis are the ones who actually handle the money.

The bank also provided cash to cover the first-ever payroll distribution for a nearby police force, the only one in the area.

The bank has no computers, making every transaction a time-consuming exchange of paper and personal signatures.

The bank provides no loans, and few people appear to deposit money. Instead, most bank customers are cashing checks that represent government salaries and pension payments.

Banking customers have to pass through a long road with cement barriers forming a serpentine security zone, but they do not pass the actual guard post for the Marine base, which is just across the street from the bank.

Morris said he is slightly surprised that the bank has not been targeted by insurgents.