Marine spouses get tough on Jayne Wayne Day at Rota 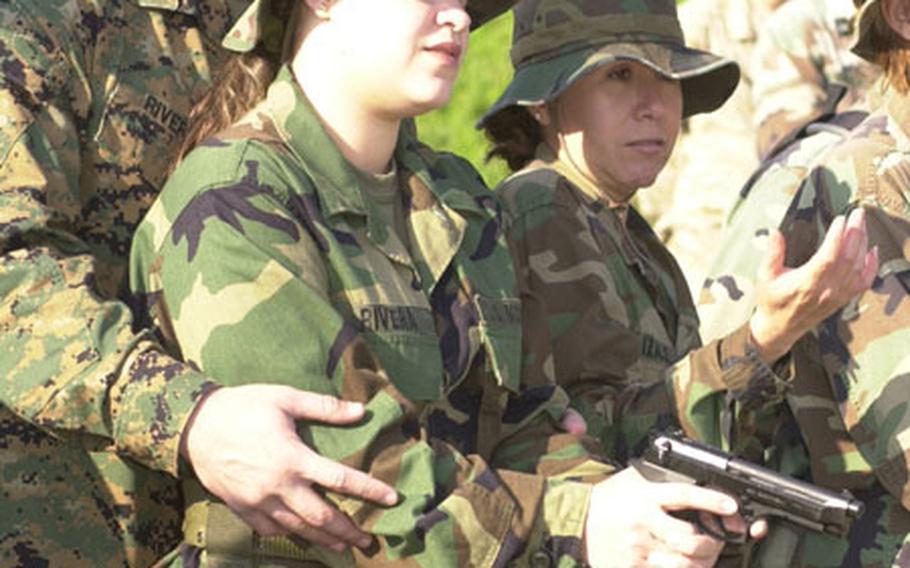 Marine Staff Sgt. Eliesel Rivera stands behind his wife, Marian, before she shoots a 9mm pistol during Jayne Wayne Day at Naval Station Rota, Spain on Friday. Marine Corps Security Force Company, Europe in Rota allowed the wives a chance to be a Marine for a day. (Scott Schonauer / S&S)

But she didn&#8217;t truly appreciate what it&#8217;s like until she wore the uniform and became a Marine for a day.

She enjoyed shooting a gun on the range, but the bulky camouflage uniforms, she said, had to go.

Crellin put on the cammies as part of what the Corps calls Jayne Wayne Day, an opportunity for spouses to get an up-close look at what their Marine spouse does on a daily basis. Marine Corps Security Force Company Europe held its first on Friday.

About a dozen wives wore uniforms, fired shotguns, rode in the back of Humvees and ate Meals, Ready to Eat for lunch. For some, it was an eye-opening experience and an education in what it is like to be a Marine.

Other military services often have open houses or their own version of bring-your-family-to-work day. But few immerse their spouses in a daylong event that includes lessons on how to clear a building with force and a crash course in martial arts.

From 9 a.m. to 3 p.m., wives reversed roles with their Marine husbands. One of the highlights of the day was the firing range, where the women shot live ammunition. Each spouse fired a 9 mm pistol and a 12-gauge semi-automatic shotgun.

It was sort of a strange scene. It&#8217;s not often that a Marine gives a lesson on the firing range and then kisses his student after a nice round of shooting.

Capt. Geoff Hall, commander of the 1st Platoon, said his wife came up with the idea to bring Jayne Wayne Day to the Rota-based company. She mentioned it to the other wives at a meeting and the company ran with it.

Plus, it&#8217;s not often that a wife can spend the day with her husband and get the opportunity to fire a few rounds on the range.

However, being a Marine for a day was an adjustment for some, and those new to military life got a quick indoctrination. When one spouse threw on a flak jacket, she cringed at the smell.

A few looked puzzled at what to do when handed an MRE pouch.

Others caught on quickly.

Aneis Hall emerged as a sharpshooter on the range. Her husband joked that she did better than he does.

Sgt. Mark Demski showed the spouses, including his own, how to fire some of the weapons.

While the wives got to be a Marine for the day, the job switch stopped right there. It didn&#8217;t appear that many Marines volunteered to do their wife&#8217;s portion of the household chores that day.

The husbands might want to reconsider, or at least be extra nice to their spouse. Wives finished the day armed with a few martial arts pointers. Some were even a little cocky.