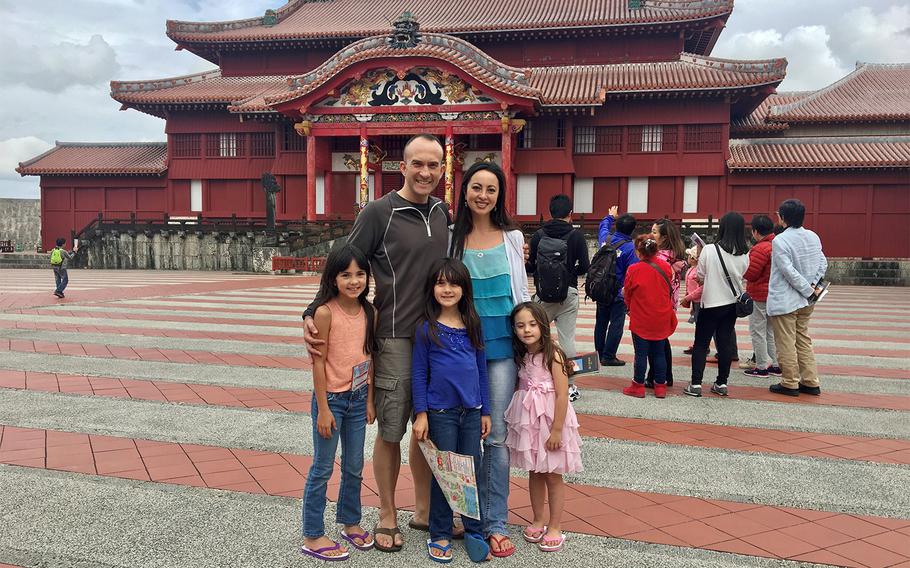 Marine Corps Maj. Indigo Gregory and his wife, Mari Gregory, pose with their daughters at Shuri Castle in Naha, Okinawa, in this undated photo. (Courtesy of Mari Gregory)

Marine Corps Maj. Indigo Gregory and his wife, Mari Gregory, pose with their daughters at Shuri Castle in Naha, Okinawa, in this undated photo. (Courtesy of Mari Gregory) 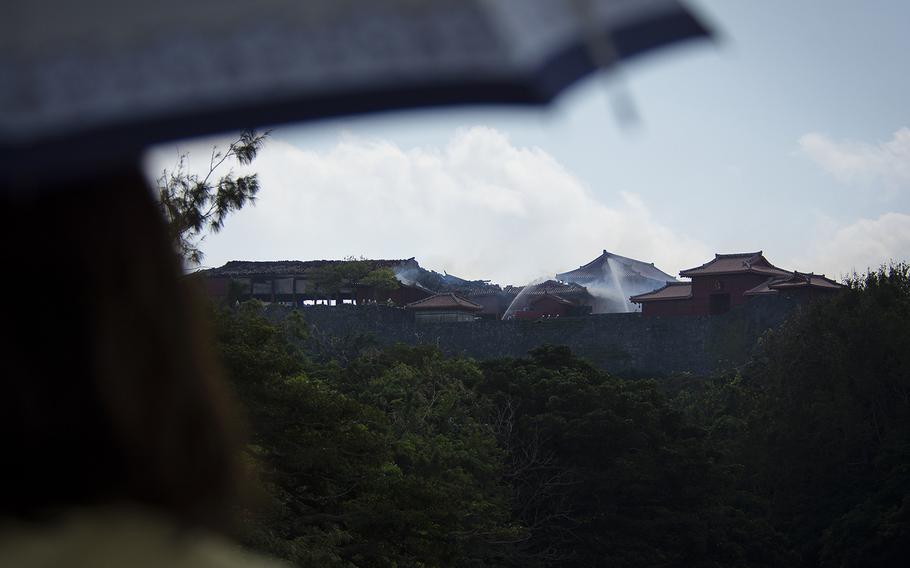 Shuri Castle, rebuilt in 1992 following its destruction in World War II, was reported ablaze at 2:21 a.m. Wednesday. It took 171 firefighters more than 11 hours to extinguish the fire, and several buildings, including the castle’s main hall, called Seiden, were destroyed.

“I felt the desire to help and want to do something for this devastation being felt all over Okinawa,” she told Stars and Stripes in an email Monday.

The couple have been stationed at Marine Corps Base Quantico, Va., since summer, but spent their previous tour living on Camp Courtney, Okinawa. Mari Gregory — who has Japanese ancestry and once taught the military community about local culture via an AFN radio program called “Living in Japan” — wrote on the GoFundMe page that images of the fire left her heartbroken.

“I have spoken to some military personnel and friends and we decided to step up in solidarity to raise funds to present to [Okinawa prefecture] to aid the rebuilding of this magnificent castle that was already once destroyed in 1945 during war,” she wrote.

A day after the fire, Okinawa Gov. Denny Tamaki launched a Shuri Castle restoration team and asked the world to consider helping the historic castle, which became a UNESCO World Heritage site in 2000.

“I will do my best to rebuild Shuri Castle as soon as possible,” he vowed during a speech in Okinawa’s capital.

The city of Naha, home of Shuri Castle, has already raised nearly $1.9 million via in-person and online donations, according to a statement by Naha Mayor Mikiko Shiroma.

“However, it was said it will cost a tremendous amount of money to rebuild the castle,” Shiroma said. “I appreciate your support for the restoration of Shuri Castle.”

Nearly $240 million has been spent restoring the castle since 1992, according to the Okinawa Times newspaper.

The cause of the fire is still under investigation; however, arson is not likely to blame, according to an Okinawa Times report that quoted police who checked surveillance camera footage.

A sprinkler system was not installed inside Seiden, where the fire started, the report said.

Stars and Stripes could not reach police and fire officials Monday because of a national holiday in Japan.

The U.S. military community has also been showing support in other ways. Many service members have taken to Twitter to post their photos of the castle under the hashtag #ShuriMemories.

“I know I can speak for a lot of other military families, that we are here for you,” Mari Gregory said in her email to Stars and Stripes. “We are grieving with you and want to support you in whatever way we can. What happens to Okinawa matters to me. Matters to all of us. No matter how far or near we are, Okinawa is always in our hearts.”