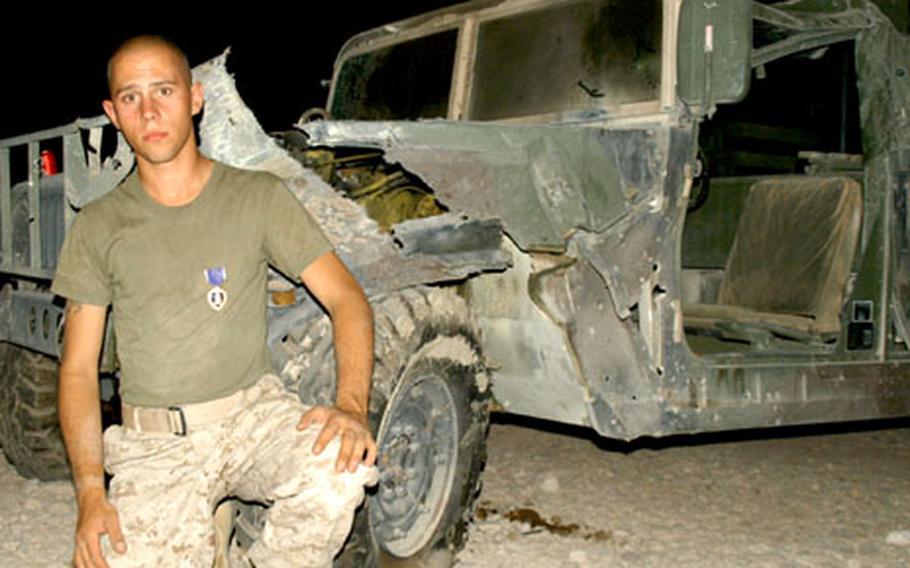 WESTERN IRAQ &#8212; It was almost midnight last Tuesday when Lance Cpl. Steven Klimtzak, a Marine from the 4th Civil Affairs Group, found the Humvee, its dark-green hulk rising out of the darkness like the wreck of the Titanic.

Since he got out of the hospital a few days before, the Marine, attached to the 2nd Infantry Division&#8217;s 2nd Brigade Combat Team, has had trouble sleeping. When he closes his eyes, he hears explosions, echoes of the bomb that destroyed the Humvee on Sept. 3 and made him the first in the brigade to receive a Purple Heart.

&#8220;There it is,&#8221; he said, shining a flashlight through the gloom to reveal the mangled steel frame of a Humvee resting among dozens of other military vehicles.

Swirling dust made the parking lot resemble a graveyard from a B-grade horror film, but even in the dark, it was easy to see that the Humvee suffered greatly in the explosion.

Its nose was a mangled mass of twisted metal; a shredded tire hung from one of the front wheels; the left-side mirror was gone and the metal bar that once held it ripped in half; the roof had caved in and the driver&#8217;s door, which was blown off by the blast, lay bent in the back of the vehicle.

Klimtzak hunkered down and shone his flashlight on the underside of the Humvee to reveal a blackened mass of metal, shredded like Swiss cheese and leaking fluids onto the sand.

Inside, the dashboard was a tangle of broken instruments. The accelerator pedal had a hole in it where Sgt. Luke Cassidy&#8217;s big toe once rested. Cassidy, also from 4th Civil Affairs Group, was medically evacuated and also will be awarded a Purple Heart, Klimtzak said.

Klimtzak, a 19-year-old from Cheektowaga, N.Y., searched the driver&#8217;s compartment in case his friend&#8217;s toe was still there, but found only pieces of the shrapnel that ripped through the vehicle.

Klimtzak pulled down his T-shirt to reveal a hole where a piece of shrapnel entered his back, and another hole where it exited his shoulder.

Being near the Humvee for the first time since the attack made the young Marine uneasy, and he lit a cigarette to calm his nerves.

Klimtzak has hazy memories of the Sept. 2 explosion. There are a few details he can recall: A few days after he arrived in Iraq, he was manning a machine gun on the back of the Humvee on his first trip outside the wire. It was a civil affairs mission to inspect a soccer field and a school, he said.

Shortly before the attack, the vehicle passed under a tree and an overhanging branch struck Klimtzak. Then he saw a man with a shovel running away from the road. As Klimtzak started to turn his gun to face the threat, the bomb detonated, he said.

The blast sent a swarm of shrapnel into the young Marine&#8217;s shoulder, dislocating it, knocking him out and damaging his hearing in one ear.

&#8220;The next thing I remember is somebody yelling, &#8216;Get out of the way, casualties coming in.&#8217; I remember the doc putting my shoulder back in place, which really hurt, and the nurse calming me down. Then they put me out because of the pain.

&#8220;I remember getting into a helicopter and waking up a day later at [a military hospital], not knowing where I was. I was scared and I didn&#8217;t know what happened. I kept worrying about Sergeant Cassidy.&#8221;

When Klimtzak called his parents, Thomas and Belinda, to tell them he was all right, they cried.

Now, standing by the wrecked Humvee, Klimtzak&#8217;s shoulder still hurts. But it&#8217;s healing fast, he said. His hearing is coming back, too. It might take longer for the psychological scars to heal.

Other times he feels angry with the people who attacked him.

For now, he is taking stress management classes and maintaining vehicles on post, but he is determined to continue his mission in Iraq.