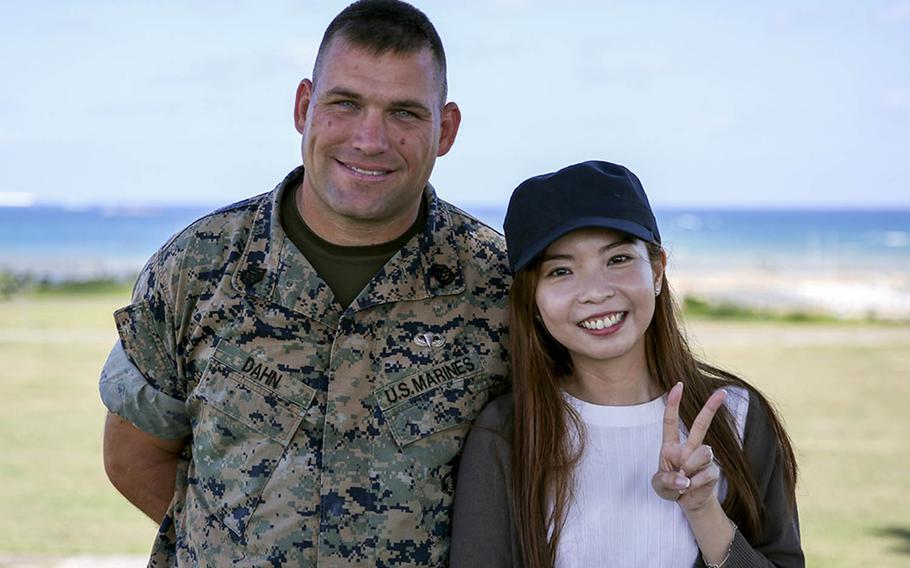 Gunnery Sgt. Scott Dahn was assisting his wife with an underwater rescue course last month at Maeda Point, Okinawa, when he noticed a Chinese scuba diver flailing in panic.

Ching-Yi Sze — who was honeymooning on the southern Japanese island prefecture during the May 20 incident — ripped off her mask. When a dive leader put it back on, she pulled out her regulator, which he also replaced, said Dahn, who initially assumed the two were training.

But when the woman again removed her mask and regulator, Dahn — a 3rd Maintenance Battalion training chief based at Camp Kinser — immediately responded.

“She was flailing in the water, which is usually the sign of a panicked diver,” he said.

When Dahn reached Sze, who was 30 feet away, he put the regulator back in her mouth. She spat it out, so he grabbed it and pushed against her teeth until she opened up, he said. Dahn then held the regulator to her face and signaled to the dive leader that they needed to head up.

By the time they reached the surface, Sze was unresponsive and barely breathing. Her lips were blue, her eyes had rolled back into her head, and she was foaming at the mouth because of the saltwater she had ingested.

Dahn inflated her buoyancy control vest and began towing her to shore.

When they reached land, he carried her up several flights of stairs and helped her breath through an oxygen tank while his wife, April, called for paramedics.

Dahn laid Sze on her left side while she coughed up seawater.

“I put my head to her chest to listen to her breathing,” he said. “I didn’t hear any gurgling, and after 10 to 15 minutes the color began to return to her face.”

Sze made a full recovery after a short hospital stay and finished her honeymoon with a snorkeling trip before returning to Hong Kong, Dahn said.

The pair have spoken several times since the incident and are now friends on social media.

“I don’t know if my husband could find another girl like me,” Sze said in a Marine Corps statement about the incident. “I can’t express how grateful I am for [Dahn].”