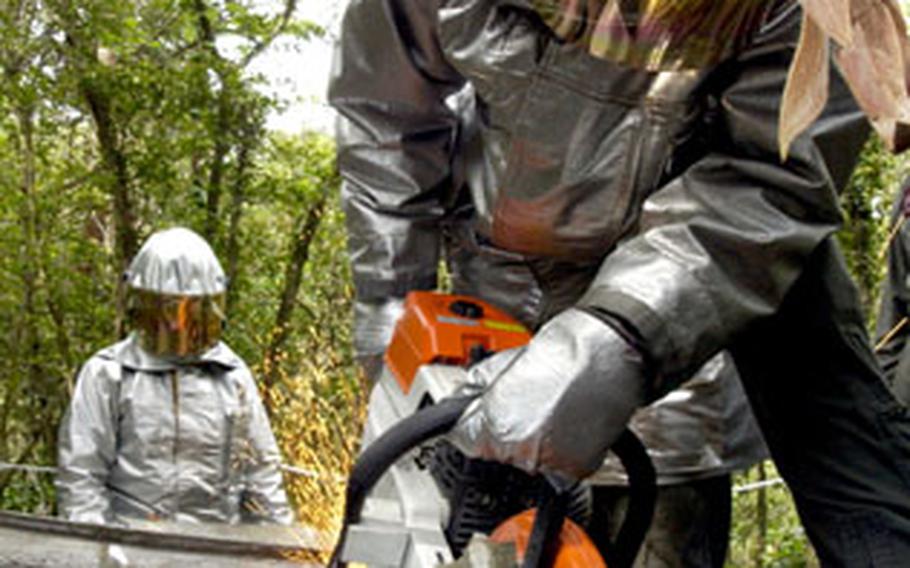 A Marine from the Aircraft Rescue and Firefighting Section of the Air Harbor and Operations Department at Iwakuni uses a K-12 circular saw May 25 to tears into the an A-4 Skyhawk wing of a plane that crashed nearby in 1971. (Lukas Blom / U.S. Marine Corps)

Thirty-five years ago, Capt. Floyd W. Bond lost his life when his A-4 Skyhawk slammed into a small mountain outside Marine Corps Air Station Iwakuni.

The base held memorials to mourn the loss. Salvage crews went to retrieve the wreckage. As the aircraft was delicately hoisted from its crash site by helicopter, a piece of the tail became dislodged and crashed back into the forest, seemingly lost forever.

Almost three decades later &#8212; about seven years ago &#8212; the base learned that hikers had found the missing piece in a wooded area, according to base officials.

This year, the base&#8217;s salvage department decided it was time to retrieve the lost section, now located about 80 feet off a small steep road on Oshima Island, about a 20-minute drive from Iwakuni.

&#8220;It was our junk, our property,&#8221; said Master Sgt. John A. Lupton, staff noncommissioned officer in charge of the Aircraft Rescue and Firefighting Section of the Air Harbor and Operations Department.

The new salvage mission would remove the American debris from Japanese land and give young Marines a chance to perform a rare real-world crash site excavation.

The mission was postponed twice due to rain. Finally, on May 25, six Marines drove the steep gravel and partially paved road up the mountain. They hiked 80 feet to the site armed with special cutting saws capable of tearing through metal and concrete. They stabilized the wreckage, sliced the tail &#8212; measuring about 12 feet by 5 feet &#8212; into six sections and carefully hiked back up the hill to their vehicle.

Lupton said it wasn&#8217;t a very big job to remove the piece, but an unusual one.

The paint scheme was practically perfect.

The pieces were returned to base, where they&#8217;ll be converted into scrap, he said.