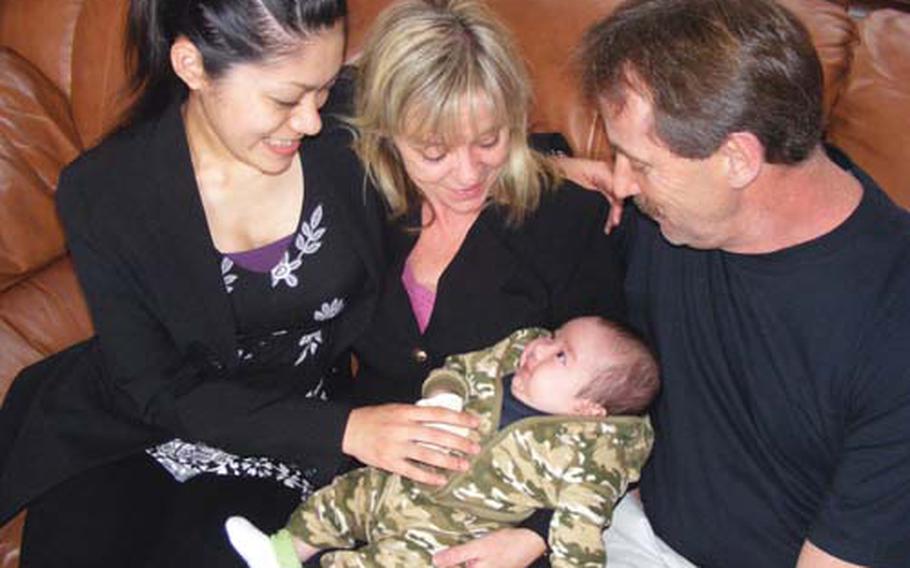 "Mikey" Ferschke&#39;s mom, Hotaru, and grandparents, Robin and Michael, share a special moment following a memorial service for Marine Sgt. Michael H. Ferschke Jr, Friday on Camp Schwab. Mikey and his mom will travel back to live with his grandparents in Maryville, Tenn., on Friday. (David Allen / S&S)

CAMP SCHWAB, Okinawa &#8212; For Mikey and his mom, the journey is almost over.

Or is it just beginning?

On Friday, Hotaru Ferschke, the Okinawa widow of a Marine killed in Iraq last summer, and Michael H. Ferschke III, the son he never saw, will fly to Maryville, Tenn., to start their new life.

After a memorial service for Sgt. Michael H. Ferschke Jr., 22, at the base chapel last Friday, Mikey, as the family is calling him, gurgled peacefully and stared up at his mother and grandparents as they expressed their excitement &#8212; and apprehension &#8212; about the 6-week-old baby&#8217;s future.

"This whole trip has been a little bit of everything &#8212; beautiful, touching, emotional, heart-rending, happy and terribly sad," said Robin Ferschke, Mikey&#8217;s grandmother.

"Originally, this trip was planned to be a reunion with Michael and his wife and new son," she said.

But Sgt. Ferschke, a team leader with the 3rd Reconnaissance Battalion, 3rd Marine Division, was killed Aug. 10 while conducting house-to-house searches in a town north of Baghdad. It was just a month after he married Hotaru by proxy.

After her husband&#8217;s death, Hotaru surprised her mother-in-law by deciding to move to Maryville and raise Mikey where his father was raised.

"It was something I prayed for but dared not ask," Robin said. "No other woman would do what she is doing."

She smiled and hugged Hotaru as Mikey drained a bottle of formula. "She&#8217;s such a good and loving mommy," she said.

"We have the support of many people back home, including our government representatives," Robin said. She said Tennessee Republicans Rep. John Duncan and Sen. Lamar Alexander have agreed to introduce legislation to legalize the proxy marriage, and recognize proxy marriages under unique circumstances.

Meanwhile, Hotaru has a visa good for one year.

Robin Ferschke and her husband, Michael, arrived on Okinawa earlier this month to escort Mikey and his mom home. While they were here, they got to meet their son&#8217;s other family.

"The Marines have treated us like a king and queen," Robin said. "Anything we need, we got."

Her son joined the Marines when he was 17 and would always refer to the Corps as his second family, Robin said.

"Now we can see why," she said. "The memorial they had today was very special," she said. "You could feel the love in the church. And the Marines, especially the ones who served with Michael &#8212; well, we know now that little Mikey has, many, many uncles.

"What the Marines have done for us, not just here but also back home, it&#8217;s helped us deal with Michael not being here," she said.

Her husband said all the attention the family&#8217;s been getting has been "amazing."

"We&#8217;ve always done things for ourselves and hate to ask anyone for anything," he said. "So, to be treated like this &#8212; I can only say the Marines are really super people." He said Mikey will have a lot of cousins close to his own age. The Ferschkes have five other grandchildren, all under the age of 7.

And what they see will remind them of their son, the Ferschkes said. "The first thing I noticed was Mikey&#8217;s lips," Robin said. "They&#8217;re just like Michael&#8217;s; he had the cutest kissable lips. And the hairline, we saw that, too."

"As he grows, Mikey looks more and more like his father," Hotaru said. "His toes, fingers and now the chin." She said she will miss Okinawa, but she is excited about the new phase in her life.

"Yes, I do feel nervous about moving to the States, but at the same time, I know that I have my mother-in-law, father-in-law, family and all the friends there who will always stand behind me and support me," she said. "It is a great sense of security."

By raising her son in Tennessee, she hopes he will grow to become like his father.

"I want our son to grow up to know how wonderful and caring man his father was, who was loved by so many people," she said. "I want him to grow up to be a kind, honest and strong man like his father."