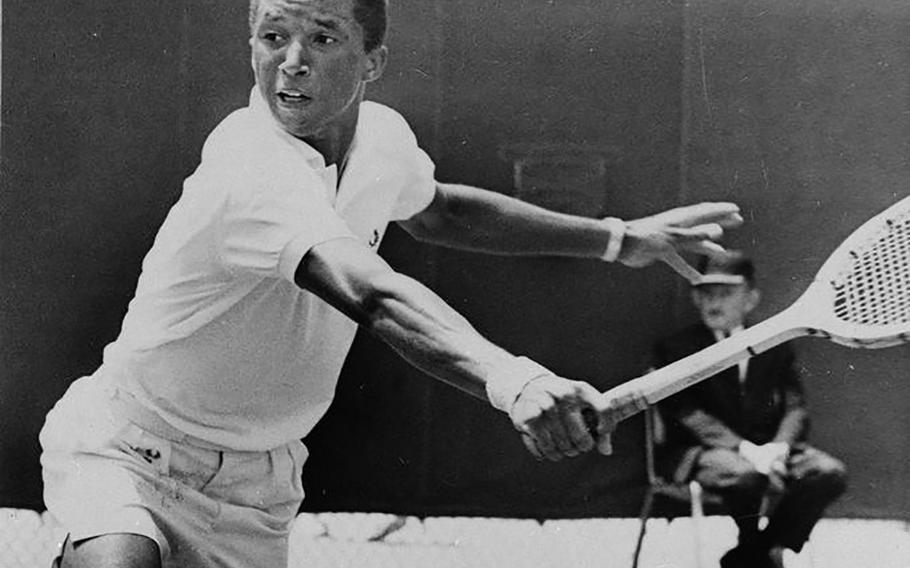 WASHINGTON — In the spring of 1967, Arthur Ashe, an Army second lieutenant, was honing his tennis skills as an accomplished amateur player, eyeing a shot to compete in a Grand Slam championship.

A world away in Vietnam, at Red Beach Base Area in Danang, his younger brother, Johnnie Ashe, a Marine, anxiously counted down the days left of his time at war.

And then it hit Johnnie Ashe, now 70. He described it as a “God thought.”

The Marine realized if he went home, his older brother, who had 15 months left in the service, could be shipped off to Vietnam. Johnnie immediately marched down to his first sergeant and requested a second tour of duty.

“I didn’t want Arthur to have to experience Vietnam. He didn’t need to experience Vietnam,” Ashe told Stars and Stripes on Friday, noting an unofficial military policy meant to spare family members from serving in battle at the same time. “Arthur didn’t need to be in Vietnam — if for no other reason than where’s he going to practice? It would just upset his body of motion and the progress he was making in the sport.”

The Marine Corps granted Johnnie Ashe his unusual request, and as he spent the next year fighting in Vietnam with the 1st Force Service Regiment and the 3rd Marine Amphibious Force, his brother served safely at the U.S. Military Academy at West Point and prepared for the 1968 U.S. Open.

Johnnie Ashe made it back to the U.S. just in time to see his brother beat Tom Okker in five sets to claim his first U.S. Open, becoming the first African-American man to win a Grand Slam tournament.

Five years Arthur Ashe’s junior, Johnnie Ashe knew from a young age his brother was destined for greatness. More than a star on the tennis court — a sport overwhelmingly dominated by white players — Johnnie Ashe recalled recognizing his brother’s intellect and commitment to righting injustices even as a teenager in their segregated hometown of Richmond, Va.

“There was more to Arthur Ashe Jr. than just tennis,” Johnnie Ashe said. “The world didn’t know it at that time, but I, as his brother, I knew it.”

Arthur Ashe realized success on the tennis court would provide him the platform to speak out. He wanted to be the Jackie Robinson of tennis, Johnnie Ashe said. Shortly after winning that fateful tournament on Sept. 8, 1968, Arthur Ashe called his brother, who watched the match while on duty at Camp Lejeune, N.C.

“He said, ‘Yeah, I’m a champion now. People will listen to what I have to say,’ ” Ashe recalled. “That was Arthur. And, as a result, I knew from that point on that there were no bounds to his life. I knew what I did [volunteering for a second tour] was right. It was providence.”

Johnnie Ashe went on to serve 20 years in the Marine Corps, retiring as a captain. Arthur Ashe excelled on the tennis courts. He won two more Grand Slam championships — the 1970 Australian Open and Wimbledon in 1975. Off the court, he raised awareness of issues including South African apartheid, health care and educational deficiencies in minority American communities and later about AIDS, the disease that would take his life in 1993 after he contracted HIV from a blood transfusion after heart bypass surgery.

Johnnie Ashe never told his brother of his decision to volunteer for a second tour in Vietnam. He said there was no reason to do so.

“It was a really simple decision,” he said Friday. “It worked out.”

However, Johnnie Ashe learned after his brother’s death that Arthur Ashe was aware of his sacrifice, when he included it in his book “Days of Grace: A Memoir.”

That sacrifice has not gone unnoticed. USTA spokeswoman Jasmine Sheppard said it was important the U.S. Open recognize Johnnie Ashe alongside Arthur Ashe. Johnnie Ashe will be presented a flag by West Point cadets Monday during the ceremony, she said.

“We wanted to be make sure we acknowledge him for his sacrifice,” Sheppard said. “This is about both of the brothers, for what was accomplished both in tennis and outside the tennis realm. We wanted to celebrate them.”

Fifty years later, Johnnie Ashe said he would again make the same decision that perhaps spared his brother from war.

“He justified what I did,” Ashe said. “He was able to stay out of [Vietnam] and play and practice and get better.

“And because of his successes in tennis, it put him in a position to assume the burdens of others, to speak truth to power … and because he was a champion, because he was great, people listened.”