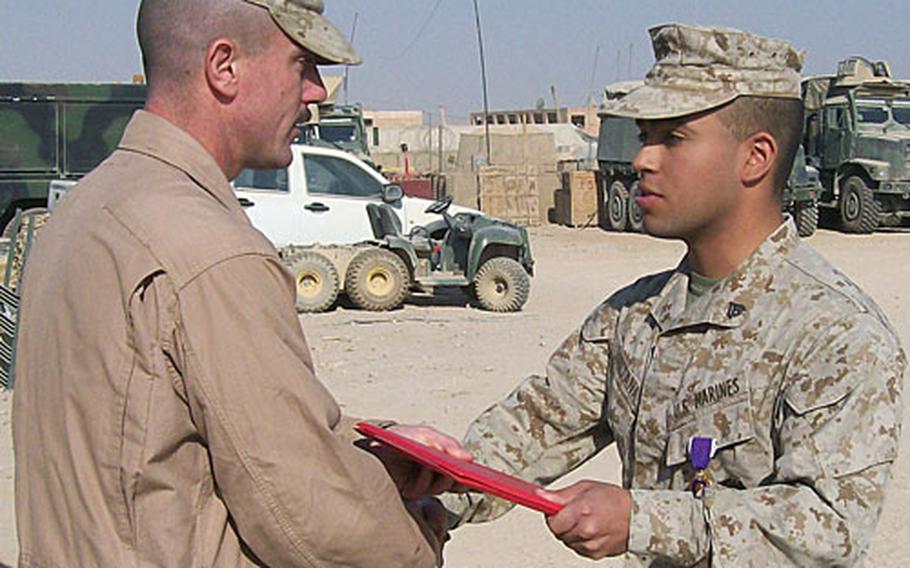 Cpl. Yoen Santana, right, from Queens, N.Y., receives a Purple Heart in Anbar province, Iraq, in August after he was wounded in the upper shoulder from a celebratory round of gunfire. He was the only Marine with the truck detachment, from 3rd Marine Division, to receive a Purple Heart during the detachment&#39;s recent deployment. (Courtesy of Staff Sgt. Lamar C. Painter)

Cpl. Yoen Santana, 21, from Queens, N.Y., a driver with the 3rd Marine Division truck detachment, was working in the motor pool, loading armor onto vehicles in Ramadi. In a nearby village, the locals were celebrating a wedding. One custom of Iraqi weddings is to shoot AK-47s into the air in celebration, Santana said.

But this time, when the locals shot their rifles in the air, one round landed in Santana&#8217;s upper shoulder.

He thought he had been electrocuted by the equipment. It wasn&#8217;t until someone pointed to the bullet hole in his shirt that he realized he had been shot, he said.

Then he noticed the wound was bleeding a little.

So, he said, he walked to the battalion aid station where the &#8220;docs&#8221; took the bullet out through a small incision near his armpit.

And, within a few days, he was back to driving. If you have to get shot, this is definitely the way to have it happen, Santana said.

The incident did result in one change, said detachment commander Capt. Terry Harper.

After Santana was wounded, the Iraqi police banned firing rifles into the air during weddings, he said.

Santana was the only Marine with the detachment to receive a Purple Heart, which he was awarded in August while in Iraq.