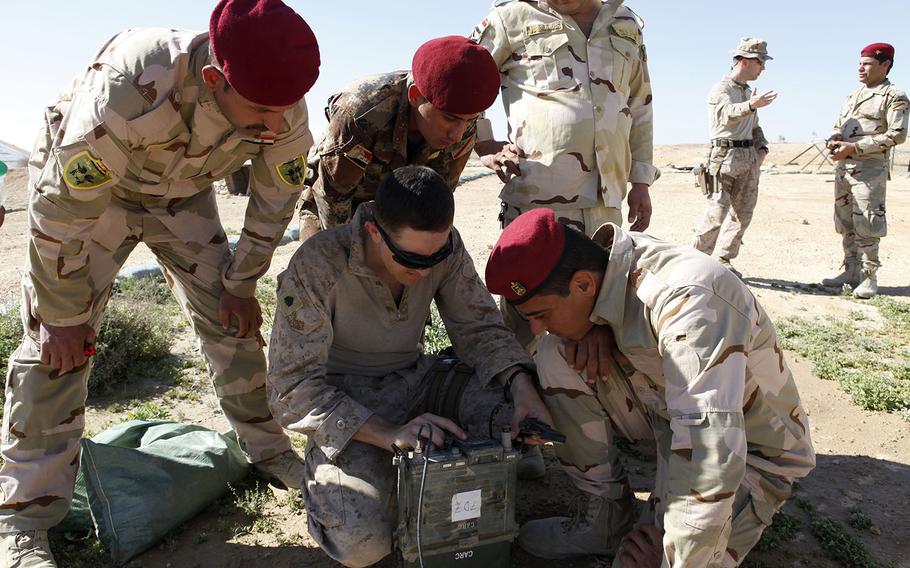 A U.S. Marine, center, demonstrates how to conduct UHF radio operations for Iraqi Soldiers with the 7th Iraqi Army Division at Al Asad Air Base, Iraq, March 2, 2016. Communication training is just one of the skills taught at Al Asad as part of the building partner capacity mission, which increases the military capabilities of Iraqi Security Forces to fight the Islamic State. (Joshua E. Powell/U.S. Army)

The death this weekend of a Marine in Iraq highlights the risks faced by the growing number of American troops purportedly serving in noncombat roles on the ground against the Islamic State group.

Deployed as “advisers” and “enablers” to support local forces, they work close to the front lines and face threats similar to those in a combat deployment.

Marine Staff Sgt. Louis F. Cardin, 27, was killed Saturday when his coalition base in northern Iraq came under rocket fire from Islamic State fighters. Cardin and his fellow Marines were providing “force protection fire support” for the base, the Pentagon said in a statement, meaning they were defending it during the attack.

Cardin is only the second American killed during the campaign, after Army Master Sgt. Joshua L. Wheeler, a special operations soldier killed in October during a raid on an Islamic State prison.

The military and Obama administration have been at odds over using the term “combat” to describe the mission in Iraq, which is intended to support indigenous forces doing the fighting. The administration dislikes the term, but the military says its forces have seen ground combat and will continue to do so in the future.

After Wheeler’s death, Defense Secretary Ashton Carter told reporters, “This is combat.” He then said the U.S. wasn’t assuming a combat role in the country.

That distinction is further muddied by the difference between special operators like Wheeler and troops like Cardin. The military has put dozens of commandos in Iraq to conduct raids, release hostages and capture Islamic State leaders. Regular soldiers and Marines remain on the bases to work with local forces or protect personnel who do.

The northern Iraqi base where Cardin was killed had only recently been established near the town of Makhmour, where Iraqi and Kurdish forces are preparing to retake nearby Mosul, Iraq’s second-largest city, with American support.

The military said it could deploy hundreds more personnel to Iraq during the buildup for Mosul, adding to the roughly 3,700 personnel already deployed as advisers or trainers. Those forces include soldiers deploying from bases in the U.S. and Marines deploying from both ground- and sea-based units in the Middle East.

Cardin’s unit was a detachment from the 26th Marine Expeditionary Unit, a 2,200-strong Marine fighting force embarked on amphibious ships in the Middle East. Other Marines are assigned from the Corps’ Special Purpose Marine Air-Ground Task Force-Crisis Response-Central Command, a rotational force deployed to Kuwait with detachments throughout the Middle East.

The Marines operate out of bases like Al-Taqaddum and Al-Asad in central Iraq, where they not only advise local forces but defend the bases, provide medical care, and fly supplies and personnel into and out of the installation.

The U.S. Army has deployed smaller brigades, of about 1,300 soldiers, for rotational training at centers like the one in Besmaya, just south of Baghdad.

In a concerted air campaign, U.S. pilots have attacked Islamic State targets in Iraq and Syria since the fall of 2014.