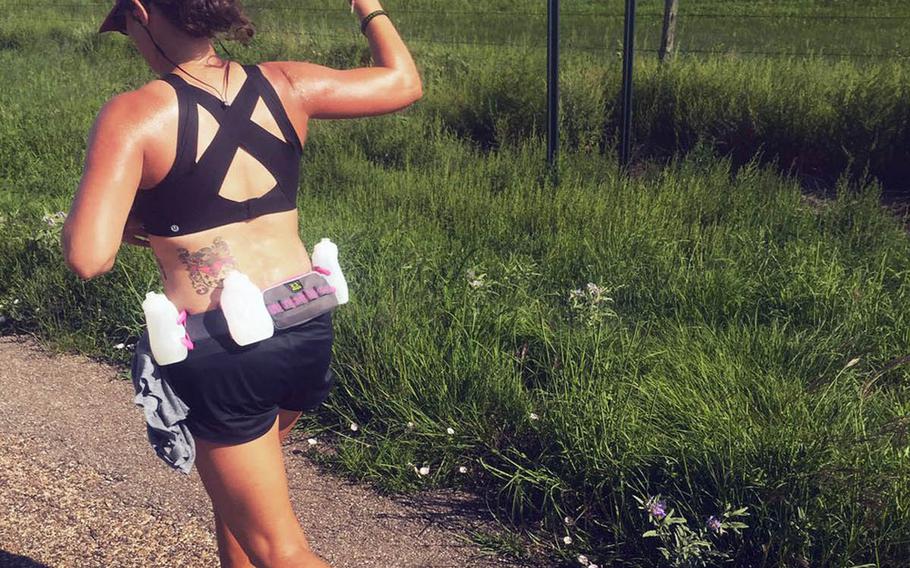 Maggie Seymour crosses into Texas from New Mexico in August during her coast-to-coast run across America. (Courtesy of Maggie Seymour)

Maggie Seymour crosses into Texas from New Mexico in August during her coast-to-coast run across America. (Courtesy of Maggie Seymour) On the 40th day of her coast-to-coast run across America, Maggie Seymour poses next to the supply van that keeps her fed, quenched and sane during the 100-day marathon. (Courtesy of Maggie Seymour) Maggie Seymour relaxes during a rest day from running in northeastern Texas, Sept. 4, 2017. She expects to reach Virginia Beach by Oct. 28. (Courtesy of Maggie Seymour)

While on terminal leave, Seymour took off from San Diego on July 22 on a fundraising run across America, a journey she has dubbed “One Marine. Coast to Coast. 100 Days.”

She averages 35 miles in eight to 10 hours a day — or a night, in areas where the sun becomes too unbearable.

She expects to reach her finish line in Virginia Beach in late October. As of mid-September, she was east of Oklahoma City. Her progress can be live-tracked online.

“Success for me will be if I can make it across the country, and if I can get people involved,” Seymour said when Stars and Stripes caught up with her via cellphone while she was in Arizona.

Through the run, she is seeking donations for the “communities” she has come to cherish: Team Hoyt, Ainsley’s Angels, Warrior Expeditions, Wear Blue, Mission Continues and Farmer Veteran Coalition. The organizations primarily support special-needs athletes and veterans.

“The communities I’ve chosen have given a lot to me, but you can get that from any community,” she said.

The 31-year-old is a gonzo marathoner.

In February 2016, she ran 161 miles over four days along the coast of California, a tribute to the 161 servicewomen who have died supporting U.S. military operations since 9/11, she said.

“She just got done running six marathons in six days,” he said. “And there she was holding a pint. I was like, ‘OK!’”

He became closer friends with her after she was stationed in San Diego a few years ago.

Seymour’s goal of reaching Virginia Beach by Oct. 28 is driven by her desire to join the annual Wicked 10-kilometer race there that week.

It was at that race six years ago she first ran with Team Hoyt, an organization that sprang from the feats of father-son team Dick and Rick Hoyt. Son Rick, now 51, is quadriplegic and has cerebral palsy, but since he was a teenager his father has wheeled him in hundreds of marathons.

Seymour’s inspiration for the nationwide run was Anna Judd, who ran from Los Angeles to New York City in 2014. Seymour talked to Judd shortly before beginning the run. “She told me to not really expect anything, to be open to whatever happens,” she said.

It didn’t take long for the unanticipated to arrive.

“I didn’t expect I’d have to start running at night until I got to Arizona, but I had to start on day three because the temperatures were so hot and because there was so much climbing on the eastern part of the California desert,” Seymour said. “That was an adjustment.”

Running at night is a challenge, and not only because it messes up her sleep cycle.

“It’s weird because on the one hand it’s boring,” she said. “There’s nothing to look at. On the other hand you can’t really relax and let go. You’re looking at where you’re running and watching out for snakes, where the trail’s going, stopping to check your map, trying not to trip over any rocks. It’s kind of the worst of both those worlds.”

Seymour paused. “And if I were to be completely honest, I’m scared of the dark,” she said.

Accompanying her is a support van, driven by a rotating crew of friends. It leapfrogs ahead of her route, supplying her with food and water at needed intervals. They camp or stay at hotels along the way.

Seymour is economical in words during an interview, but her blog entries since beginning the run are often eloquent.

Nearing the end of a day’s run in mid-August, she wrote about a “meltdown.”

“Crack. Wide open. I started sobbing. No, wailing,” she wrote. “Now there’s ugly crying and there’s drunk crying and then there was this, the ugliest and most irrational cry I’ve ever had. I cried dry tears, fat wet tears, snot tears, some mix of dirt and sunscreen tears. I cried so hard the cows mooed in solidarity, or mockery. I cried out of pain, not really what I felt that day but every pain I had ever felt, every pain anyone I had loved had ever felt. War, death, the loss of children, addiction, the feeling of pure helplessness when the pain you’ve been fighting back, holding in finally demands to be felt. I wailed for all of it.”

Her cross-country route runs through the Midwest, but Seymour said she had to make “a hard decision” early on to drop plans to detour north to her hometown in Alexander, Ill., where she lived in a rural home until heading to college.

The visit would have added too many extra days, she said. “We’re practical people in the Midwest,” she said, jokingly. “So practicality over sentimentality.”