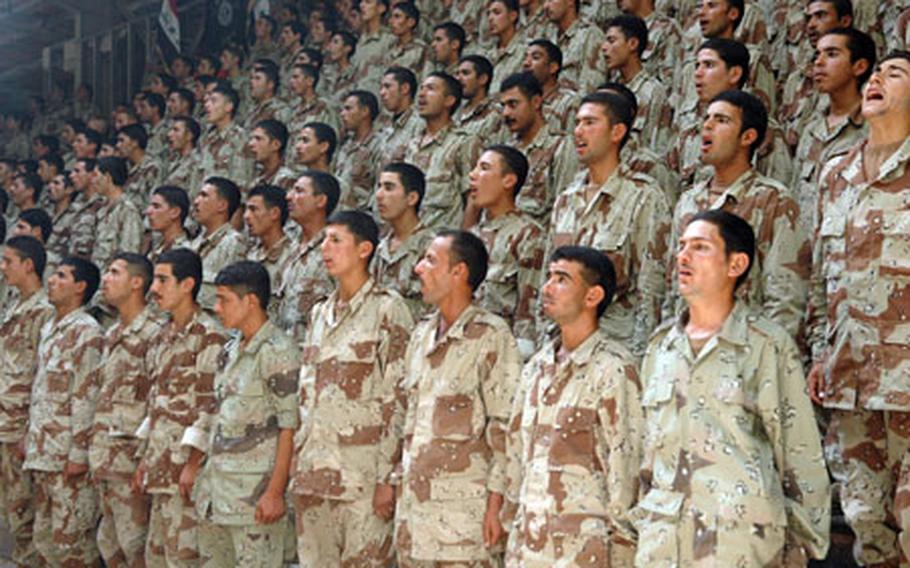 About 500 Iraqi soldiers from Anbar province took their oath of service Saturday after training for six weeks with U.S. Marines at the Advanced Infantry Training Center at Camp Habbaniyah. The center will expand this summer, graduating as many as 2,600 new soldiers every six weeks. (Teri Weaver / S&S)

The recruits trained and took their military oath at the Advanced Infantry Training Center, a U.S. Marine Corps-run school on this Iraqi army base in Anbar province.

By the end of summer, the center will be capable of pumping out as many as 2,600 soldiers every six weeks, said Marine Corps Chief Warrant Officer 5 Terry Walker, the center&#8217;s director.

Walker and his instructors admit they aren&#8217;t growing future Marines. They are teaching young men how to safely carry a weapon and shoot. The new Iraqi solider &#8220;has to be a little bit better than he was when we found him,&#8221; Walker said.

For Walker and many in his crew of about 40, it&#8217;s their second time working at the training center. They left in March 2006 after a year tour, and they returned in January for another 12 months. Walker also has eight Iraqi soldiers on staff as instructors, as well as interpreters.

The challenges at the center go far beyond language. Many of the Iraqi recruits are barely literate, a waiver the Iraqi government has been granting regularly to prospective soldiers. Some are outside the government&#8217;s 18-to-29 age requirement, another popular waiver.

The Iraqis are not required to do any physical training, nor can the Marine instructors use physical exercise as a form of punishment. For the most part, they can&#8217;t dole out any punishment at all, Walker said. Punishment brings embarrassment to the recruit, and he will shut down, the gunner said.

And the lessons taught in the short time are very basic. Don&#8217;t rest your chin on the barrel of your assault rifle. Look down the barrel with your right eye, not your left. Zero your weapon.

Staff Sgt. Richard Lamphere, 42, of Camp Lejeune, N.C., teaches basic marksmanship at the center. He&#8217;s nearing retirement, and has spent half of his time as a Marine instructor. Teaching another culture requires some inventiveness.

Some of the biggest challenges involve time. New U.S. Marines spend 13 weeks at boot camp, plus another 52 days of training for infantrymen. The Iraqi recruits have six weeks, with only two days on the firing range. On average, about 10 percent drop out or don&#8217;t make it through the program.

But Walker sees ways to improve. He&#8217;s added a small-arms weapons course to teach Iraqi soldiers and police officers how to teach their own troops about safety and marksmanship.

Next, Walker hopes to add a special course for young Iraqi officers. Traditionally, the Iraqi military has no history of using senior enlisted soldiers as noncommissioned officers, a core concept of leadership inside the American military.

But the Iraqis do give much respect and responsibility to their junior officers, and Walker thinks that&#8217;s where the Americans should work to improve a military structure often hamstrung by its reliance on senior officers.

The instructors have become accustomed to the quick lessons, the short turnaround. It doesn&#8217;t mean they don&#8217;t worry.