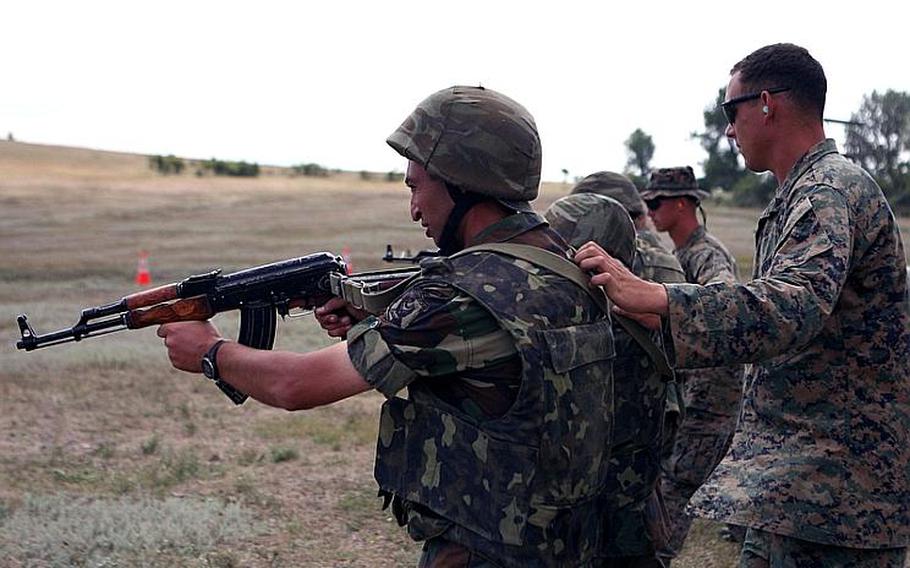 Cpl. James A. Scarborough, a member of the Marines Black Sea Rotational Force, helps two Azerbaijani soldiers build proficiency in close-quarters style shooting at the Babadag Training Area in Romania. The Black Sea Rotational Force 11 trained with Azerbaijan?s Operational Capabilities and Concepts Battalion in August as part of an effort to develop interoperability in counterinsurgency and peacekeeping operations in a combined-forces environment. Since April, Marines have been working with partner militaries from Black Sea, Balkan and Caucasus regions. (Tatum Vayavananda/U.S. Marines)

STUTTGART, Germany &mdash; The Marine Corps&rsquo; Black Sea Rotational Force will end a five-month mission in eastern Europe in the coming weeks, an operation that could serve as a model for how Marines conduct training missions in future.

Since April, Marine reservists operating from a base in Romania have set up noncommissioned officer academies and conducted counterinsurgency and peacekeeping training with more than a dozen countries from the Black Sea, Balkans and Caucasus regions. Many of those nations have contributed troops to the mission in Afghanistan.

&ldquo;What we bring to the table is the experiences of the last 10 years battling the war on terrorism,&rdquo; said Master Sgt. Daniel Devine, the platoon commander and training officer for the task force&rsquo;s ground combat element. That cooperation, he said, makes it easier to work together in places such as Afghanistan.

The unit of reservists serves as a Special Purpose Marine Air Ground Task Force. Two KC-130s have enabled the unit to travel great distances during the course of its rotation in Europe. In addition to operations in Romania, the task force conducted missions in a host of other countries, including Georgia and Ukraine.

At one point during the deployment, Marines were working in six countries.

&ldquo;We did all that with 185 people,&rdquo; said Lt. Col. Sean Clements, spokesman for the Marine mission in Romania.

For Marine Forces Europe, with headquarters in Stuttgart, the Black Sea Rotational Force is an example of an efficient way to build up the capacity of foreign forces. That is expected to become a bigger focus for the Corps as the mission in Afghanistan dials down in the years ahead.

The Black Sea Rotational Force is an example of how to accomplish that, Marine officials said.

&ldquo;We do this with a very small expeditionary force, light infantry-focused,&rdquo; said Brig. Gen. Paul Brier shortly before departing his post at deputy commander of Marine Forces Europe earlier this summer. &ldquo;We get a lot of engagement with a lot of different partners.&rdquo;

Last year, the Marines tested the concept of a rotational force in Europe with a three-month exercise in Romania. That was followed up with this year&rsquo;s five-month rotation, which includes Marine reservists selected from units across the U.S. The rotational missions are expected to grow and continue through at least 2017.

&ldquo;From my point of view, I will tell you, every one of us wants to continue to participate in these exercises,&rdquo; said Lt. Col. Nelson Cardella, commander of the Marine task force in Romania.

The Marines have plans to launch a similar task force later this year in support of U.S. Africa Command.

The special purpose task force deployment model, which combines air and ground troop elements under a single commander, offers great flexibility and reach, according to Marines. It has enabled the Marines to work alongside troops from Romania, Bulgaria, Moldova, Serbia, Albania, Macedonia, Montenegro, Croatia, Bosnia and Herzegovina, Ukraine, Turkey, Georgia, Armenia and Azerbaijan during the course of its current deployment.

Rear Adm. Mark Montgomery, deputy director of plans and strategy at U.S. European Command, said the group of rotating Marines has helped to augment EUCOM&rsquo;s training initiatives across eastern Europe. While U.S. Army Europe continues to be the heart of EUCOM&rsquo;s efforts, deploying thousands of troops for numerous training missions during the course of the year, the Marines are breaking new ground, he said.

&ldquo;The Black Sea Rotational Force is a very innovative and unique idea the Marines have come up with,&rdquo; Montgomery said.