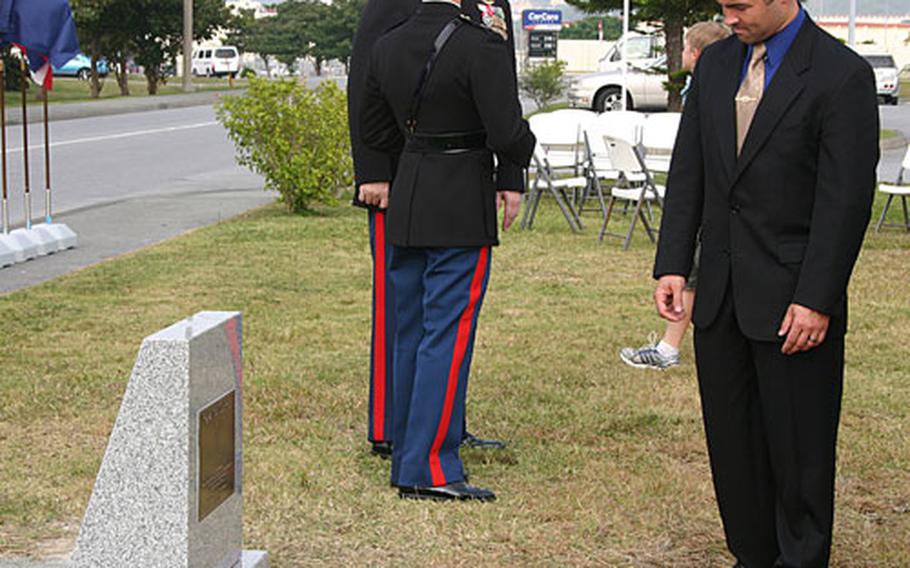 Rayme Brock looks at the memorial plaque dedicated to his twin brother, Capt. Sean L. Brock, after a ceremony on Camp Foster that renamed the street in front of the plaque for his brother. Capt. Sean L. (Cindy Fisher / S&S)

Rayme Brock looks at the memorial plaque dedicated to his twin brother, Capt. Sean L. Brock, after a ceremony on Camp Foster that renamed the street in front of the plaque for his brother. Capt. Sean L. (Cindy Fisher / S&S) Brock, left, talks with the commander for Alpha Company. His brother was commander for A Company on Camp Foster in 2004 before he deployed as an individual augmentee to Iraq where he was killed in action Feb. 2, 2005. (Cindy Fisher / S&S)

CAMP FOSTER, Okinawa &#8212; Marines who served with Capt. Sean L. Brock remember him as a dedicated leader &#8212; the kind they want to emulate.

Sean was commander of Camp Foster&#8217;s A Company, Headquarters and Service Battalion in 2004 when he volunteered as an individual augmentee in Anbar province, Iraq, where he was killed in action Feb. 2, 2005. He had already served a tour in Iraq and one in Afghanistan

Rayme came to Okinawa to attend a memorial and dedication ceremony for his brother Friday near the Joint Vehicle Registration Office on Camp Foster. During the ceremony, a memorial plaque for Sean was unveiled and the road in front of the Center was named Captain Brock Road.

After the ceremony, Rayme talked about his brother.

Though four minutes older, Rayme said he felt like he was always trying to catch up with Sean.

They were together through recruit training and both served as squad leaders, Rayme recalled. Sean was determined to retain a leadership position throughout recruit training &#8220;and he survived all the way through,&#8221; Rayme said.

Sean&#8217;s goal was to eventually become an officer, Rayme said.

While Rayme served on active duty, Sean had joined the Reserve as a fire crash and rescue Marine and went to college to get a degree.

Rayme said he has read many of the messages posted about his brother on Web sites like www.fallenheroesmemorial.com and they don&#8217;t surprise him.

&#8220;He knew when to switch the on/off switch between officer and friend&#8221; and he cared about people, Rayme said.

Even from a hellish place like Iraq, Sean reached out to those he cared about.

While deployed to Camp Blue Diamond in Al Anbar, Sean called Rayme &#8220;to cheer me up&#8221; about a problem he was having with his then girlfriend.

Sean also described to Rayme how things had calmed down in Iraq because the country was going though elections.

Rayme remembers that Sean said it was an eerie calm that made him uncomfortable.

&#8220;My family and I were honored at the dedication of the Marine Corps to continue to remember my brother,&#8221; Rayme said.