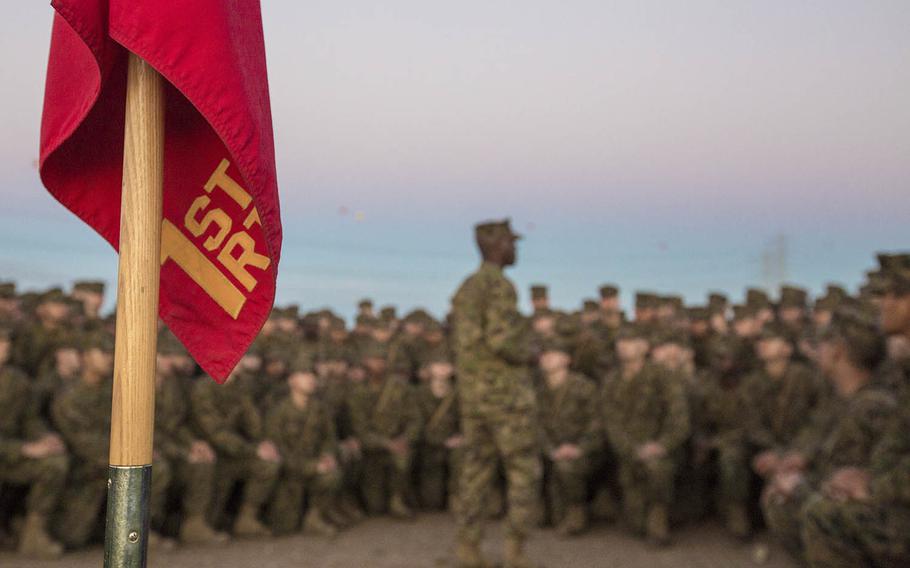 Michael Baker Jr., 21, Tristan Abbott, 19, and Vincent Grano, 19, were discharged from the Marines earlier this year after complications from an illness believed to have been caused by contaminated food left them incapable of serving, court documents say.

The trio were among 244 recruits training at the depot in October 2017 when they ate food — believed to be undercooked Sodexo hamburgers — contaminated with E. coli, according to the documents. Fifteen men — including Baker, Abbott and Grano — developed hemolytic uremic syndrome from the bacteria.

The condition affects the circulatory system and “results in the destruction of blood platelets (cells involved in clotting), a low red blood cell count (anemia) and kidney failure due to damage to the very small blood vessels of the kidneys,” according to the National Kidney Foundation.

HUS patients have an 85 percent recovery rate, according to the foundation; however, complications that can arise from the syndrome may have long-term effects.

A Defense Department investigation into the incident found “a statistically significant association between ill recruits and the consumption of undercooked ground beef,” according to court documents. The Centers for Disease Control and Prevention also investigated the matter and came to the same conclusion.

Abbott, Baker and Grano are now asking that a jury order Sodexo to compensate them for violating the company’s “duty” to serve safe food and warn consumers of possible dangers in its food, according to court documents. They say Sodexo’s negligence caused the health issues and that the company is strictly liable to the plaintiffs for their illnesses.

Sodexo has not yet filed a response and its director of public relations, Enrico Dinges, said he was “not able to provide a detailed response at this time” because of the ongoing litigation.

Career-ending illnesses Baker, of Coeur d’Alene, Idaho, had been at the recruit depot for only 13 days when he was taken by ambulance to Naval Medical Center San Diego and was diagnosed with HUS on Oct. 29, 2017, according to the court documents.

Baker ate in the depot’s mess hall each day during his short stay, and began feeling ill about Oct. 25, the documents say. He kept up with his boot camp activities for several days despite increasing fatigue, stomach cramps and diarrhea.

By Oct. 29, his stools had become “grossly bloody,” according to the court documents. That’s when he reported his “desperately ill condition” to his senior drill instructor and was ordered to the depot’s medical clinic, which quickly sent him to the naval medical center.

Baker was hospitalized there for the next month and admitted to intensive care three times with severe pneumonia and kidney failure developed as a complication of HUS. He was placed on a ventilator for “at least four days” and underwent repeated dialysis treatments, the court documents say.

He spent a second month hospitalized at San Diego’s Alvarado Hospital Medical Center undergoing rehabilitation, the documents say. His kidneys were damaged permanently in the ordeal, and he was discharged from the Marines in March.

Abbott, of Haskell, Ark., arrived in San Diego on Sept. 25. After eating hamburgers from the cafeteria on Oct. 21, he developed bloody diarrhea, vomiting and stomach cramps, according to the court documents. He put up with the symptoms for two days before being taken to nearby Camp Pendleton on Oct. 26 for “additional exercises and training.”

Abbot kept working until Oct. 29, when one of his drill instructors took him and another ill recruit to the camp’s naval hospital, the court documents say. After two days of hospitalization, medics took him to Scripps Memorial Hospital Encinitas, where he was diagnosed with HUS and was started on dialysis.

On Nov. 3, Abbott was moved to yet another hospital — Naval Medical Center San Diego — to keep up with his worsening symptoms, the court documents said. He remained in intensive care for nearly four weeks and developed involuntary twitching in his head, arms and legs because of a neurological issue caused by HUS.

He later went through rehabilitation at Alvarado Hospital, and remained there until January 3. He then returned to the San Diego recruit depot, but his illness left him unable to continue his training and he entered a rehabilitation platoon, according to the court documents.

Abbott was medically discharged on April 27.

Grano, who began recruit training Aug. 7, 2017, came down with symptoms similar to Abbott and Baker's on Oct. 23 – “the day before he was to begin the final training challenge of boot camp, called ‘The Crucible,’” according to the court documents.

Three days later, the resident of Lake in the Hills, Ill., reported his symptoms to his senior drill instructor and took an ambulance to the emergency room and was released later that day, the documents say. But days later, he lost consciousness and woke up in a bed at Naval Medical Center San Diego.

Grano also was diagnosed with HUS, which caused kidney failure and central nervous system problems including sudden-onset seizures that later grew into epilepsy, according to court documents. He went through rehabilitation at Alvarado Hospital, but the diagnoses led to his discharge from the service.

Looking ahead The court process is in its early stages, as the lawsuits were filed just last month.

Dinges said Sodexo sends its condolences to the ill Marine recruits, and that the company is investigating the source of the bacteria that caused the medical conditions.

“We are sorry to hear that several Marine recruits became seriously ill last October at the Marine Corp Recruit Depot and Camp Pendleton,” he said. “Since then, we have been in the process of learning all the facts about the situation. We are continuing to seek a complete understanding of the source of their illness, as the CDC report does not conclusively determine or identify the source of the E. coli.”