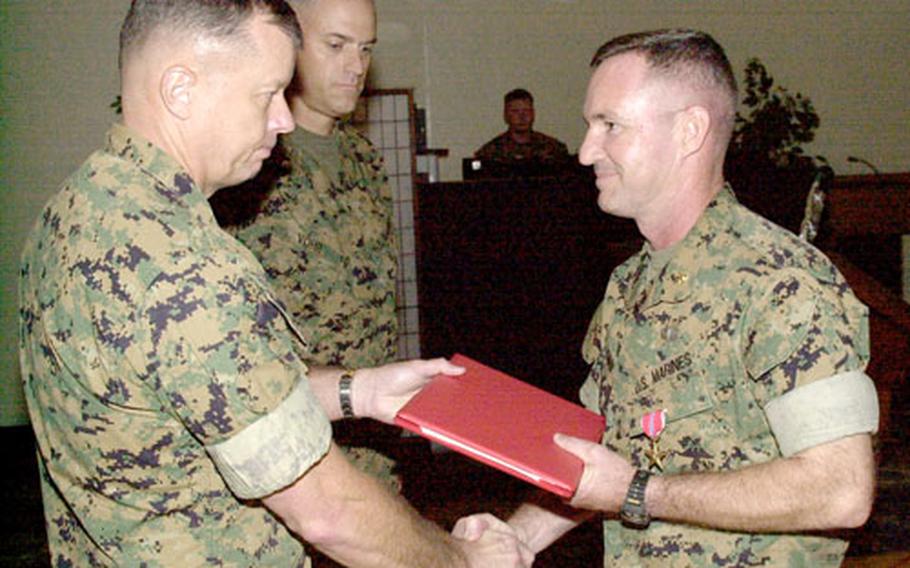 Maj. Rick Brown receives the Bronze Star with valor Friday from Brig. Gen. Frank Panter at Camp Kinser, Okinawa, as Lt. Col. Alex Vohr watches. Vohr nominated Brown for the award because of Brown’s leadership as executive officer of the 31st Marine Expeditionary Unit before and during such key moments as the Battle of Fallujah in Iraq. (Erik Slavin / S&S)

CAMP KINSER, Okinawa &#8212; A Marine officer received the bronze star with a combat &#8220;V&#8221; for his leadership in Iraq at the Kinser Surfside on Friday in front of several dozen of his fellow Marines.

Maj. Rick Brown received the medal for his leadership as executive officer of the 31st Marine Expeditionary Unit&#8217;s Service Support Group 31, which returned from Iraq in recent months after duty in some of the nation&#8217;s toughest areas.

Originally designated as a theater Reserve unit, the 31st MEU could have deployed to Afghanistan or several other areas under Central Command&#8217;s purview, Brown said.

In October 2004, Brown and his troops got the go-ahead to move into position for what would become the Battle of Fallujah, and to do it within 17 days.

Brown organized a convoy for the 500-mile trek, and also integrated servicemembers attached to the 31st MEU.

The unit would end up with multiple Marine and Army battalions attached to it, which was historic, Brown said.

During full-scale fighting in November, they supported Regimental Combat Team 7, which covered the eastern half of Fallujah.

Their responsibilities included evacuating prisoners taken during the fight, transporting Iraqi troops across the theater and removing ordnance, including a multi-ton cache at one site. The find included everything from French and Russian weapons to missiles, mortars and even a U.S. Navy 500-pound bomb.

Despite ongoing insurgent attacks, unit servicemembers successfully removed the weapons from the area.

The 31st MEU also protected polling areas during Iraq&#8217;s elections in January. Seeing large numbers of Iraqis turn out to the polls despite the inherent danger was a highlight of the deployment, Brown said.

But what sticks out most about the experience in Brown&#8217;s mind is that while some servicemembers under his command sustained injuries, none were killed.

Brown has been based on Okinawa for two years with his wife, Karen, and three children. He currently serves as executive officer of the Materiel Readiness Battalion.