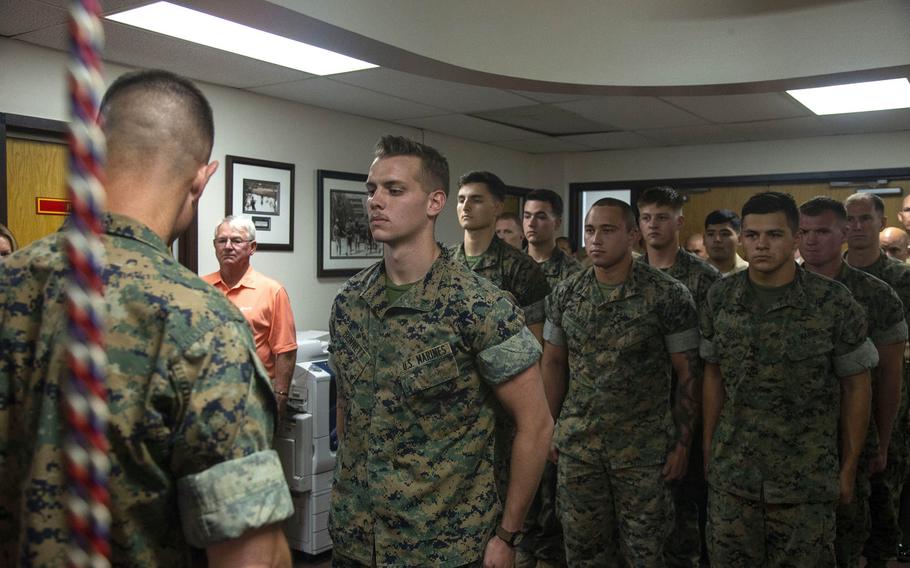 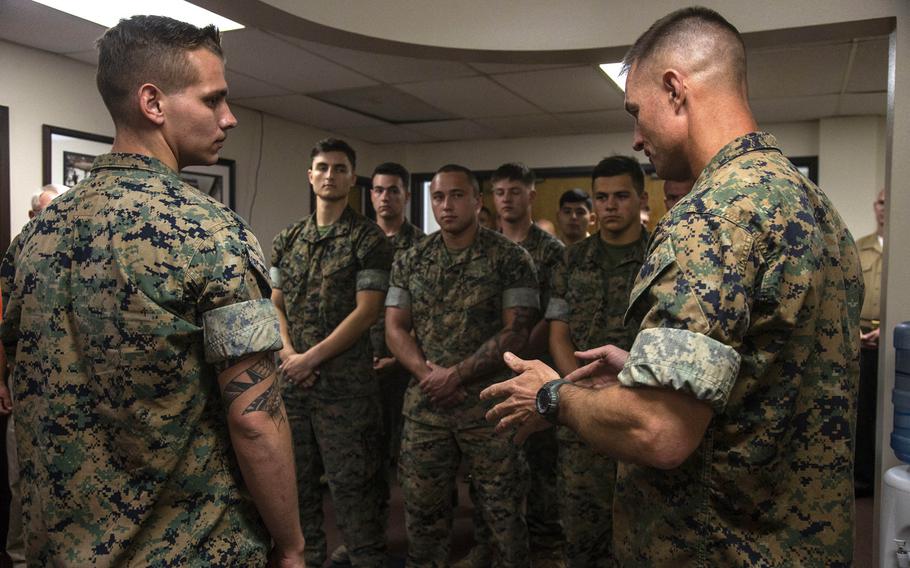 Lance Cpl. Dillon Bennett doesn’t remember what happened after he was caught in a mortar round explosion last month, but his fellow Marines told him he got up, grabbed a missile and brought it back to complete a fire mission.

He suffered a traumatic brain injury, shrapnel to his knee and other cuts and bruises as a result of the blast. Late last month, 7th Marine Regiment commander Col. Kyle B. Ellison awarded the young Marine a Purple Heart during a ceremony at the Marine Corps Air Ground Combat Center in Twentynine Palms, Calif.

Bennett and his squad had been operating at an undisclosed location on July 9 when they were ordered to fire a missile. Bennett, a machine gunner with 3rd Battalion, 7th Marine Regiment, was getting the missile when he was hit.

“Even though I don’t remember what happened, I am glad that my body and warrior instincts kicked in along with my training,” Bennett said July 27, according to a Marine Corps statement announcing the award.

Bennett said it was humbling to receive the Purple Heart, the oldest decoration still awarded in the U.S. military. The award turned 236 on Tuesday and was first designated by George Washington for “any singularly meritorious action.” It is now awarded to those wounded or killed by the enemy.

The ceremony was attended by friends, hospital staff, Bennett’s parents and grandfather — a retired 7th Marines officer — who congratulated him and welcomed him home to the U.S., the statement said.

“We planned on being here to help him recover from the injury when he got back stateside,” said Shar Bennett, the young Marine’s mother. “To be a part of the ceremony was an added bonus.”

Ellison, the regimental commander, spoke of how Bennett’s actions showed esprit de corps, a sense of unit morale vaunted in Marine culture, according to the statement.

Hearing the colonel’s kind words about her son “was an amazing experience,” Shar Bennett said. “It caused us to hold our head a little higher, for Dillon.”

The Marine’s father, Chad Bennett, said the family is prepared to support his long recovery.

“I know that my son wants to be back, fighting with his men,” Chad Bennett said. “We know he has a long journey ahead of him, but we are there for him every step of the way.”

Officials with the Tampa-based Marine Corps Forces Central Command and the Twentynine Palms base were not immediately available for further comment Tuesday.

Marines of 3rd Battalion, 7th Regiment have been serving this summer with the Special Purpose Marine Air Ground Task Force, Crisis Response-Central Command, which supports operations in the region that spans from Northeast Africa through the Middle East to Central and South Asia.

While the Marine Corps has not said where the incident occurred, Marines have been active in Syria. Citing operational concerns, the service has released little information on efforts to help local coalition partner forces, known as the Syrian Democratic Forces, clear the Euphrates River valley of the last pockets of Islamic State fighters.