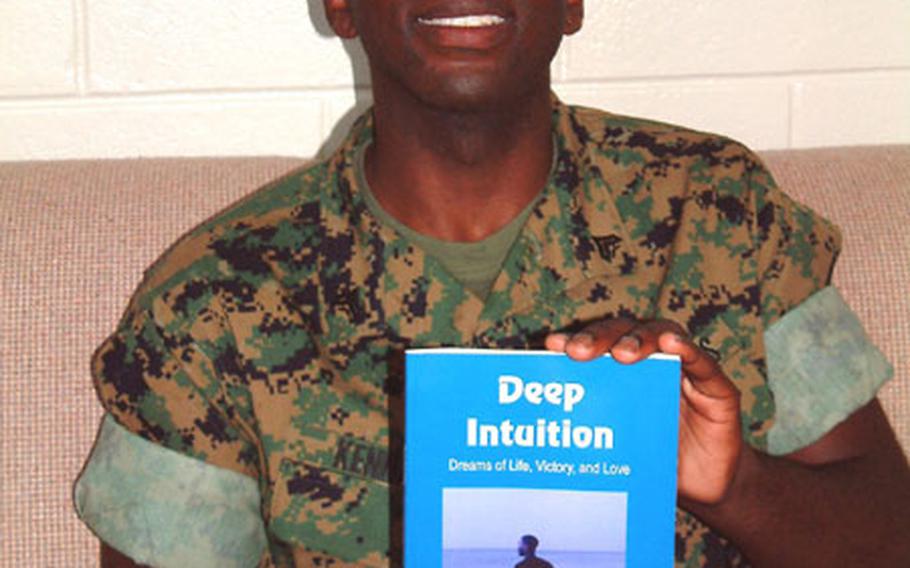 Marine Cpl. Alfred L. Kennard and his new book of inspirational poems, "Deep Intuition; Dreams of Life, Victory and Love." He will have a book signing July 3, noon to 3 p.m. at the Camp Foster Main Exchange. (David Allen / S&S)

CAMP FOSTER, Okinawa &#8212; It took Marine Cpl. Alfred L. Kennard nine months to give birth to his first book of poetry, a gestation period during which he scribbled his ideas into a notebook as he rode the Marines&#8217; Green Line between camps Hansen and Foster.

Assigned to Camp Hansen&#8217;s 9th Engineer Support Battalion, Kennard found himself traveling often to Camp Foster in the past year. He made many of those trips to read poetry at gatherings sponsored by the Camp Foster Chapel.

The result of his moving meditations is &#8220;Deep Intuition: Dreams of Life, Victory, and Love,&#8221; recently published by Authorhouse 1st Books Library. It&#8217;s available online from Amazon.com and will be sold at the Army and Air Force Exchange&#8217;s Bookmark on Camp Foster.

He was inspired to self-publish the book at the urging of the people who attended the Foster Chapel poetry nights at the base community center.

&#8220;What I would do is write an average of three poems per trip between Hansen and Foster,&#8221; said Kennard, who traveled to Camp Foster several times a week to attend the poetry readings, Sunday service at the chapel and Friday night Bible studies.

Kennard, 20, will have his first book signing Saturday at the Camp Foster Exchange from noon to 3 p.m.

He has more books in mind, including a novel.

&#8220;But it&#8217;s difficult to find the time,&#8221; he said, explaining that he might have to delay those plans until he gets out of the Marine Corps next year and starts college at the University of Alabama.