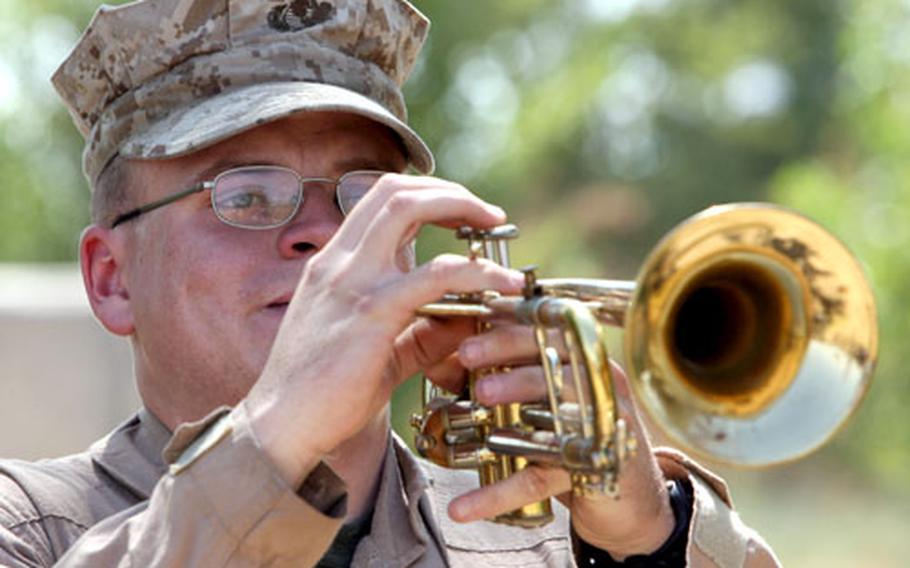 CAMP HABBANIYAH, Iraq &#8212; As a trumpet player for the 1st Marine Division Band, Cpl. Travis Anderson had no clue what he&#8217;d be doing when he deployed to Iraq, although he was pretty sure it wouldn&#8217;t involve playing music every day.

Now, as he wraps up his first combat tour in western Iraq and prepares to begin a second, extended tour, the 20-year-old Pinon Hills, Calif., native said he&#8217;s become more attached to his new job as a Humvee driver for an explosives ordnance security team than performing on a Camp Pendleton parade ground.

While some military bands have deployed to Iraq with the specific purpose of playing at ceremonies and other events, the 1st Marine Division Band has been given a very different mission. The Marine musicians have been attached to the Headquarters and Support Company of Regimental Combat Team 5, where they guard facilities, serve in administrative convoys and provide security for bomb disposal technicians.

Like Anderson, the band members say the duties are a far cry from their musical military occupational specialties, but are rewarding nonetheless.

&#8220;In a way this is totally outside our box, but as band members we&#8217;ve been trained to be flexible,&#8221; said Sgt. Andrew Coons, 24, of Hudson, N.Y. Coons, a trumpet player, is just completing his tour as a convoy commander, where he has helped shepherd a handful of Humvee gun trucks throughout the Fallujah-Habbaniyah area during the last six months.

The band members say they&#8217;ve grown used to taking a ribbing from fellow Marines over their musical backgrounds, but say they enjoy their new responsibilities. Cpl. Daniel Lambert, 20, of Dallas, traded in his saxophone for an M240G machine gun and now works as a turret gunner on a Humvee.

Capt. Jason Freeby, commander of the headquarters company, said he&#8217;s been very pleased with the band members&#8217; performance, although he gave pause initially when told that they would be augmenting his unit.

Freeby and other Marines eventually came up with a motto for the musicians: &#8220;An instrument is like a rifle to a musician Marine, but it takes a Marine musician to be able to use both.&#8221;

There are those moments though when certain musicians are asked to play formally. Anderson still packs his trumpet and plays it at memorial services. He said he&#8217;s played a handful of times since he&#8217;s been in Iraq.