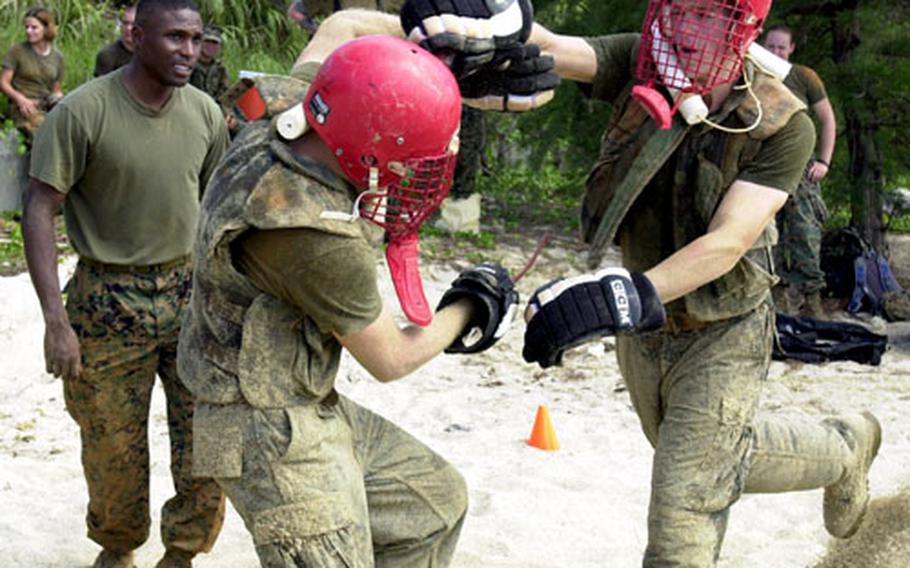 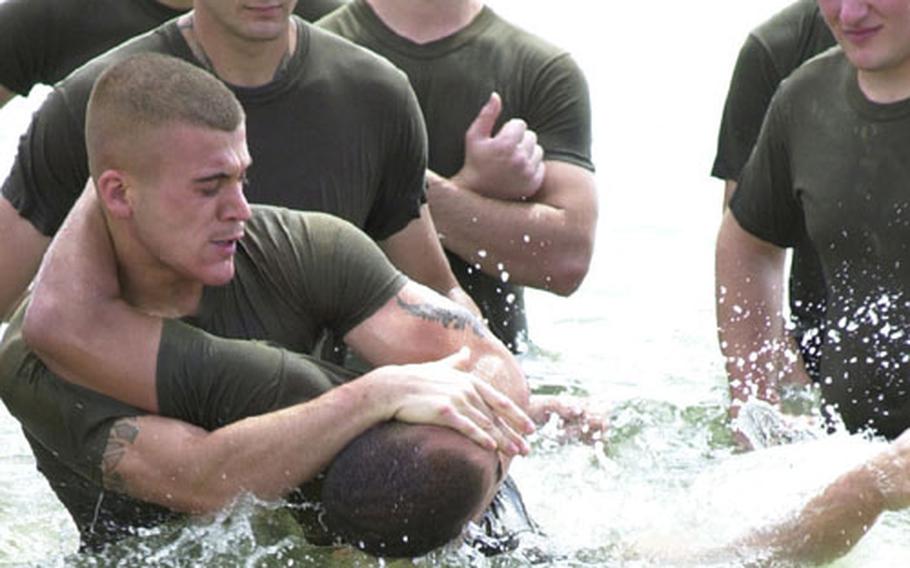 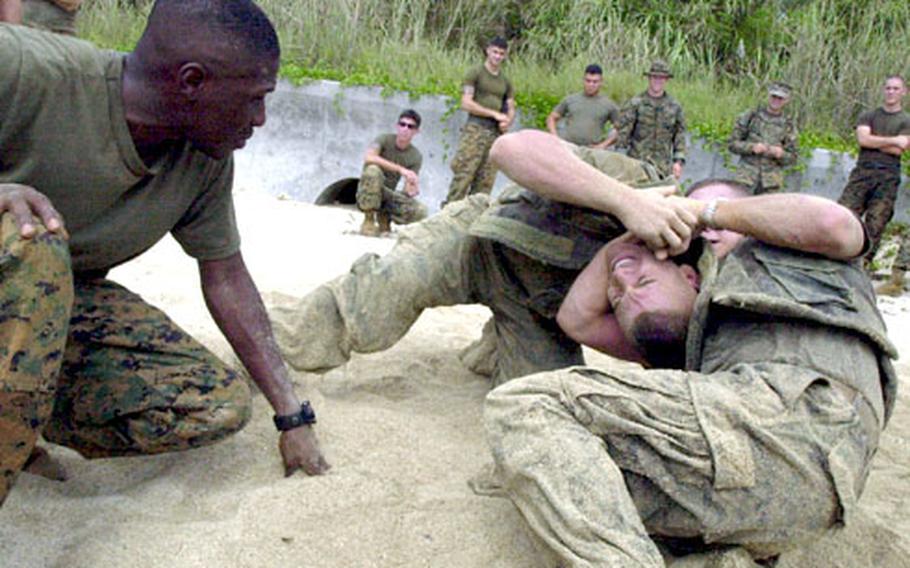 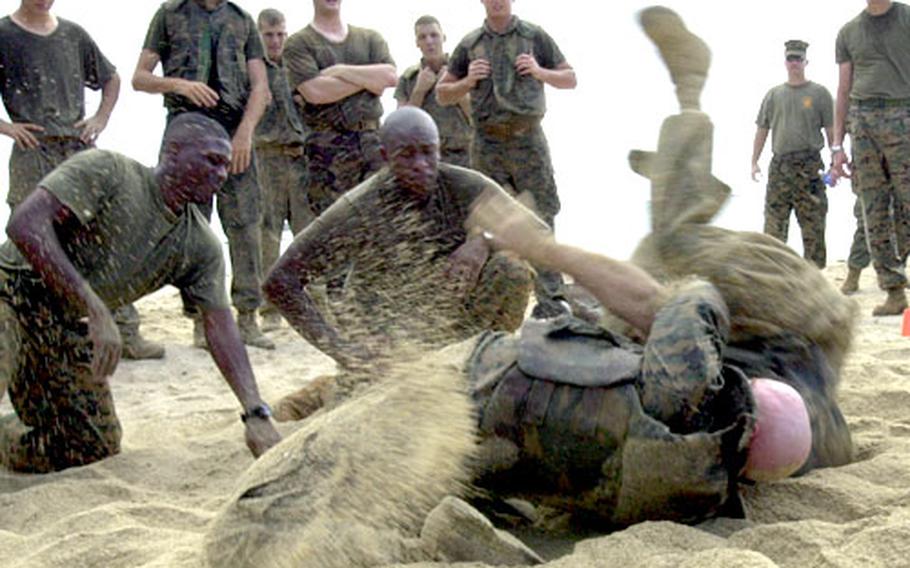 A Marine military policeman flips his opponent as fellow Marines look on during a grappling training session on the beach of Camp Schwab. (Fred Zimmerman / S&S) 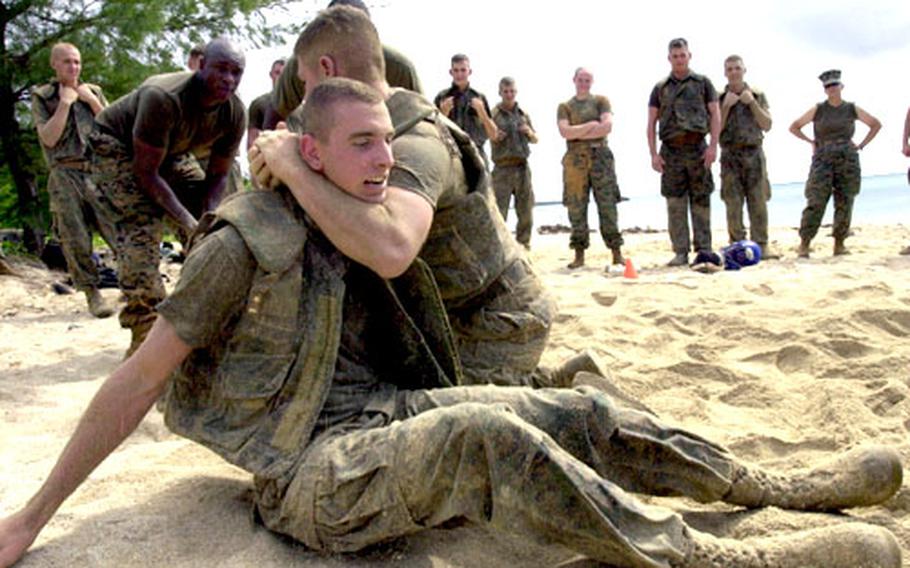 CAMP SCHWAB, Okinawa &#8212; What looked like a rumble on the beach Tuesday was actually Marine military policemen training for possible deployment.

They were engaged in hand-to-hand combat with one another on the sand and in the water, and numerous MPs were taken to the ground and put in chokeholds.

The MPs are undergoing several days of toughening, according to 2nd Lt. Ryan Bailey, in charge of training for the Provost Marshal Office. For endurance, the Marines ran obstacles in the &#8220;engineer course&#8221; and also a &#8220;recon course&#8221; up and down the steep jungle hills.

Bailey said they also trained in hand-to-hand combat, including knife fights using rubber knives and protective gear, and put martial arts training to use during grappling on the beach and in shallow water.

&#8220;The idea is to get them tired,&#8221; Bailey said while describing the knife training. &#8220;We run them (down the beach), have them get into the water and come back, have them low crawl on the beach and then have them come in and knife fight. We want them to see they can work when stressed and tired.&#8221;

While half of Tuesday&#8217;s group &#8212; more than 30 Marines &#8212; took part in the training on the beach, the other half participated in weapons familiarization training, Bailey said. They wielded the M2 .50-caliber machine gun, M240 Gulf machine gun, M249 Squad Automatic Weapon machine gun and MK19 grenade launcher, all weapons they possibly could use if deployed to Iraq.

The Marines did not fire the weapons but were given in-depth classes on how to operate them, take them apart and reassemble them.

Bailey said the training is important for the Marines as the unit sometimes is asked to fill specific billets in Iraq with individual augmentees.

Lance Cpl. Aaron Hasley, who works for PMO on Camp Foster, said he has little experience with the weapons he would use if deployed.

But the training on the beach was the most fun for him, he said, even though he wasn&#8217;t that comfortable.