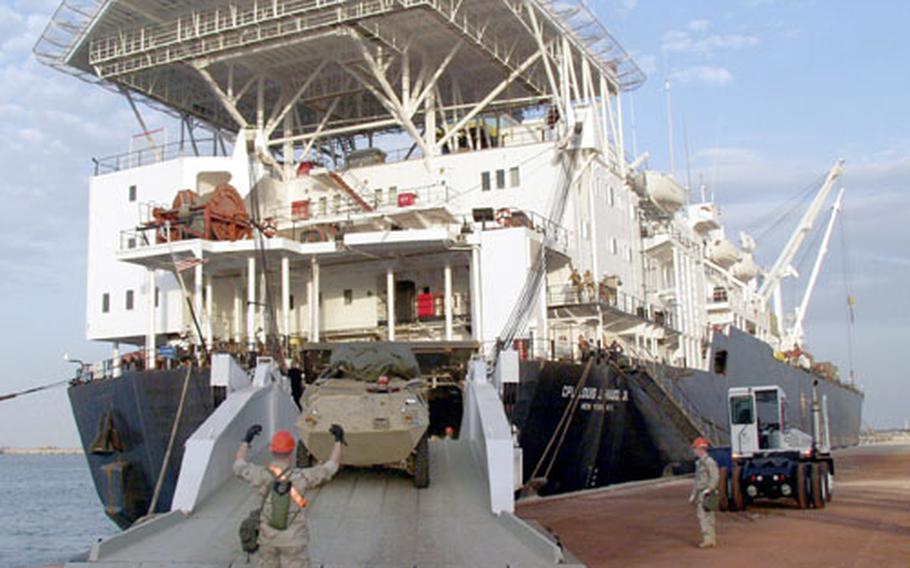 A U.S. Marine guides a Light Armored Reconnaissance Craft down the ramp of a Military Sealift Command ship in January as the Marines were building up for the war in Iraq. Under normal circumstances, the Marines would head home before replenishing and repairing their Maritime Prepositioning Forces. For now, those same operations are being performed in Kuwait. (Courtesy of U.S. Navy)

War in Iraq drained the Marine Corps&#8217; Maritime Prepositioning Force &#8212; the fleet of loaded ships with enough equipment and supplies to carry out any Marine mission, anywhere in the world for 30 days.

With the war over and Marines preparing to deploy home, the force must be rebuilt. But instead of shipping stocks home for repairs and regenerating the force from its headquarters, the entire process is happening in Kuwait.

The work environment might not be optimal &#8212; sand storms, searing hot tools and a long distance from spare parts. But Marine Corps leaders bet the job can be done and believe it will save time and expense.

&#8220;This is the most austere condition the Marine Corps has ever had to do this in," said Lt. Col. Paul Turner, logistics director at Blount Island Command, Fla., headquarters for the MPF.

The scope of the force is enormous: The fleet of 15 ships, soon to be 16, carries 62 percent of the Marine Corps&#8217; firepower. Eleven of those ships were used in the war and will be replenished in a few months.

The ships hold the equipment and supplies to sustain 32,000 Marines for a month, and can reach any shore in seven days. They can pump water or fuel to a location from two miles out.

The ships supplied missions in Somalia and the Persian Gulf and served for emergency assistance after hurricanes and volcanoes.

The program started about 18 years ago when Navy and Marine Corps leaders realized there were enough Navy assets to carry all the supplies they needed. The Marine Corps began contracting container ships from private shipping companies. &#8220;I think it&#8217;s time proven,&#8221; Turner said.

Marines used about 95 percent of that.

Ordinarily, the ships&#8217; stock undergoes routine maintenance every three years, Turner said. The current stock, the vehicles used in the war, have driven 1,500 miles, shot thousands of rounds and were in some cases damaged in the war.

The vehicles, particularly tanks, need a lot of maintenance, Turner said. Repairs parts are shipped in, and vehicles are cleaned and painted if needed. Repairs are often done at night because metal tools get too hot in the sun.

Maintenance crews have found the pitfalls of working in sand.

Some new equipment will help replenish the ships&#8217; stock. But the rest must be driven to Kuwait from Iraq, cleaned and repaired and hauled back onto the ships.

If pieces were damaged beyond repair, units hand over their own equipment and gear brought from their home bases. Re-establishing the MPF is the top priority.

Everything is accounted for except consumables. The pieces are put together like a puzzle and the process takes a huge staff.

&#8220;Right now it&#8217;s less exciting than it was back in Iraq. All we&#8217;re doing is taking equipment from people and giving it to someone else,&#8221; said Lance Cpl. Gardy Exalant with 1st Supply Battalion at Camp Pendleton.

It can get tedious, but for a private first class coming to Kuwait straight from basic training and school, it&#8217;s a breeze.