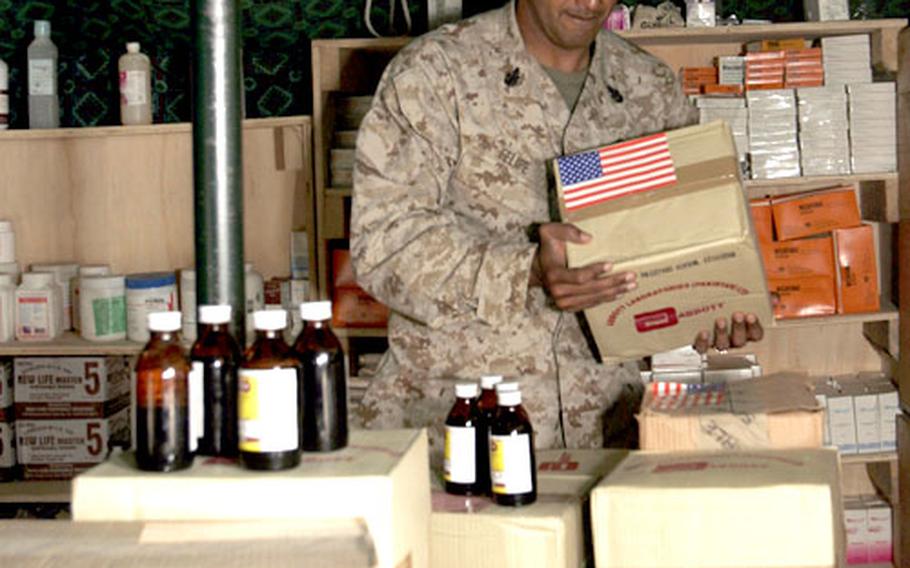 As the Marines and sailors of Combined Medical Relief Team 3 pack up and prepare to head back to Okinawa, one of their last goodwill gestures to the people of earthquake-stricken Pakistan was donating medicine and other supplies.

The troops from Okinawa&#8217;s 3rd Marine Logistics Group, III Marine Expeditionary Force, recently handed over 900 bottles of various pediatric medicines, along with more than 300 pounds of wood, to a relief camp in Shinkiari, Pakistan. The wood had been used to make flooring, chairs, tables, benches and shelves for the servicemembers to use in the field hospital they had set up in the same city.

&#8220;This is most gracious,&#8221; said Dr. Ali Jadoon, the chief medical coordinator for the Daryal Clinic, according to a Marine Corps news release. &#8220;Especially the U.S. Marines &#8230; they have provided all the infrastructure basically needed for our clinic and pharmacy with desks, chairs, tables, and &#8230; these medicines.&#8221;

Jadoon said the flooring will help keep the clinic clean, while the furniture will help organize the facility. Some of the medicines donated help treat influenza, high fever, asthma and colds, according to the release.

Jadoon said he is thankful for the troops, who are to leave Pakistan by the end of the month, for lending a hand and &#8220;putting the smiles back on these people.&#8221;

The team deployed to Shinkiari in Pakistan&#8217;s North-West Frontier Province late last year to provide medical relief to survivors of the deadly Oct. 8 earthquake. The team established its field hospital in mid-November and since then treated almost 15,000 patients. It also has helped deliver more than 12,000 tons of relief supplies.

&#8220;We came to Pakistan in early November 2005 from Okinawa, Japan, on a mission of humanitarian assistance and disaster relief,&#8221; Lt. Col. Jamie Gannon, commanding officer of CMRT 3, was quoted in the release as stating. &#8220;This has been a tremendously rewarding and memorable mission for all of us.&#8221;

Marine Capt. Danny Chung, CMRT 3 spokesman, stated: &#8220;There was a need, the Navy-Marine Corps team had the capability, so we filled that need. The hardest part will be saying good-bye to the Pakistani friends we met here &#8212; we have forged a strong relationship here that transcends politics.&#8221;

No return date has been announced but the Marine contingent is expected to return soon to Okinawa.