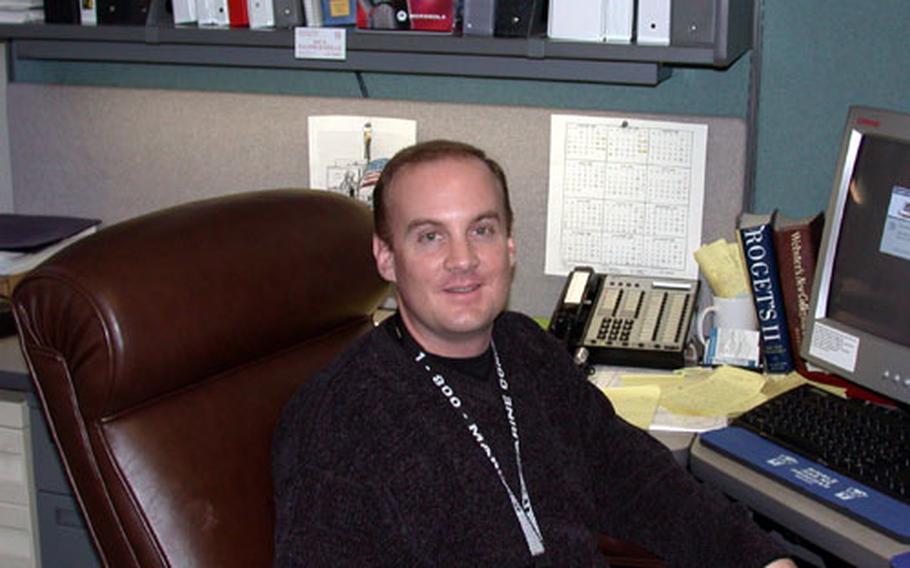 Reservist Maj. Brad Jewitt, 33, had to resign as mayor of the 3,000- population Maryland town of Berwyn Heights because he has been activated for at least a year for Operation Enduring Freedom. In his civilian job, he&#39;s the head of facilities division for the Marine Corps - making him a "civilian Marine," he joked. (Sandra Jontz / S&S)

Brad Jewitt, 33, a Marine Corps Reservist, has been called to active duty. Wednesday, after serving eight months as mayor, he relinquished his political job during his final Town Council meeting in Berwyn Heights, Md.

&#8220;I&#8217;m bummed. I worked hard to get that position. But duty to the country comes first,&#8221; said Jewitt, who as a civilian is the head of the facilities management section at Marine Corps headquarters in Arlington, Va.

He&#8217;s been activated for at least a year for Operation Enduring Freedom, the nation&#8217;s war against terrorism. Jewitt said he can&#8217;t say where he&#8217;s off to, when and what he&#8217;ll be doing, but only that the Corps needed a field-grade officer with at least a top-secret clearance.

Jewitt enlisted in the Corps in 1989, and as an infantryman in California, was assigned to a unit designated as a combat replacement company for troops fighting in the Persian Gulf War.

Once he earned a B.A. in political science from York College in Pennsylvania, the now-commissioned Jewitt became a financial management officer and spent nine years active duty, much of it stationed in the Pacific theater.

In the summer of 2001, he took the civilian job, and left the life of a military man behind.

&#8220;I was here when that happened and we were really busy establishing work spaces for some 600 Marines who were displaced from the Pentagon. You should have seen them &#8212; they really wanted to get back to work. We converted every nook and cranny of the Annex into office space. People were working with wires hanging down, sitting on boxes, using boxes as tables.

&#8220;By November, the pace slowed down and I began thinking about getting back involved. So I joined the Reserves.&#8221;

As a Reservist, he was assigned to the Legislative Affairs Office and got to see a little of the behind-the-scene workings of Congress.

A divorced father &#8212; his son Hunter is 5 years old &#8212; Jewitt wanted to remain close to family and put down roots, so more than a year ago, he moved to the suburban Washington town of Berwyn Heights, population 3,000.

His political career, albeit short, had gone from the Berwyn Heights Parks and Recreation Council, to an appointed spot on the Town Council and finally to mayor eight months ago, getting 387 out of the 490 ballots cast.

One of his better qualities is his ability to make people feel welcome, said Nikki Jamison, 24, one of his employees.