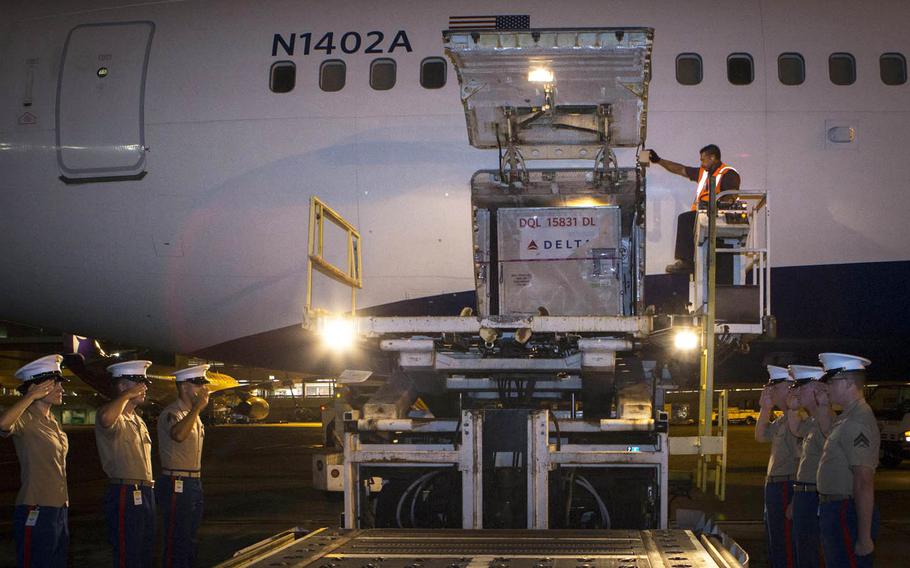 Marines with U.S. Marine Corps Forces, Pacific salute Cpl. Roger K. Nielson during a dignified transfer of remains at the Honolulu International Airport, Nov. 12, 2015. Nielson was a World War II Marine assigned to Company E, 2nd Battalion, 8th Marine Regiment, 2nd Marine Division, who was killed during the Battle of Tarawa, where more than 18,000 Marines fought and more than 1,000 were killed over three days of fighting. (Erik Estrada/Courtesy of the U.S)

YOKOTA AIR BASE, Japan — The remains of a Marine who went missing 72 years ago in World War II’s Battle of Tarawa will be buried with full military honors Monday in Denver.

The remains of Cpl. Roger K. Nielson were recovered in June when History Flight, a private organization that works with the Defense POW/MIA Accounting Agency, discovered a burial trench containing what it believed to be the remains of 36 Marines, a Marine Corps statement said. Among those remains was posthumous Medal of Honor recipient 1st Lt. Alexander Bonnyman Jr.

Nielson was identified through dental comparisons and circumstantial and material evidence, the statement said.

“I feel honored to have been chosen to do this duty,” said GySgt. Franklin Rivas, a Marine with Combat Logistics Battalion 453 who escorted Nielson’s remains during a transfer ceremony Thursday in Honolulu. “Also the timing of the escort really hits my heart, because I’m escorting a veteran from World War II back home.”