Marine keeps eye on the good, the bad and the illegal 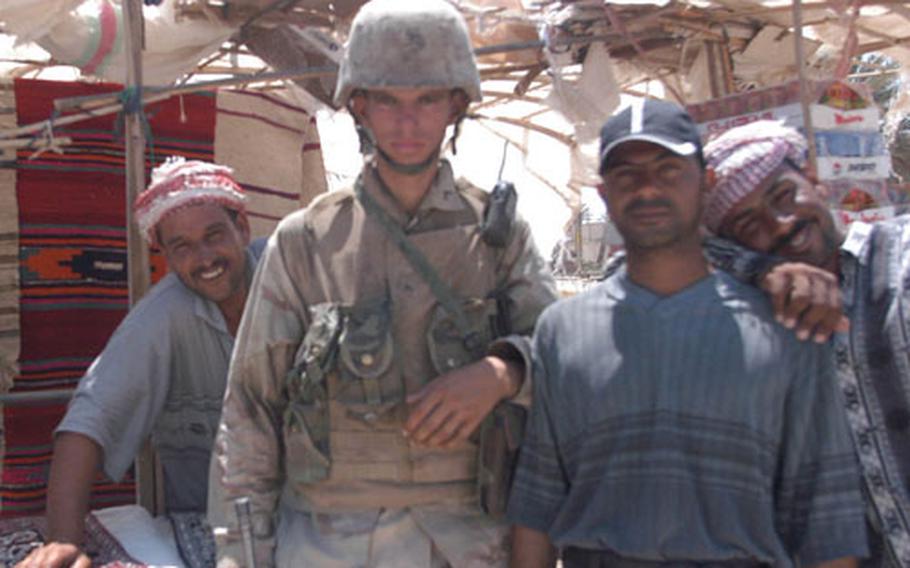 HILLAH, Iraq &#8212; Mixed among the piles of soda cases, cartons of cigarettes and old Iraqi dinars, Marine Pfc. Jonnie Seely looks for the forbidden goods &#8212; steroids, artifacts and bottles of whiskey, real or fake &#8212; as he patrols an impromptu market that has grown up outside a U.S. base.

Seely, with Company B of the 1st Battalion, 7th Marines out of Camp Pendleton, Calif., provides the main security for the small market outside Camp Babylon near Hillah.

He looks for and seizes banned items and monitors the safety of visiting U.S. servicemembers &#8212; especially women, who tend to get harassed by vendors.

He breaks up fights over prices, faces down vendors bold enough to push and shove him and expels violators.

It&#8217;s a long day under the hot sun, but his role has kept the market safe and orderly, helping vendors and patrons alike.

Before Seely, 19, began regular patrols, the market was chaotic and cramped.

The Marines had been conducting regular patrols at the market, but Seely asked to be there full time. He came up with the idea of painting white lines to designate where vendors can set up, to keep them spaced out and to establish a space over which they could not cross.

The lines make the market more orderly, but it can still get a bit out of control on busy days.

Company B is serving as force security in the area, about 1&#189; miles from their main camp. Despite working a stone&#8217;s throw from the ruins of Babylon, they haven&#8217;t had a chance to see the sites.

But the job&#8217;s not all bad. His time at the market has exposed him to Iraqis in a way most Marines don&#8217;t see them. He&#8217;s heard their war stories and the tales of the atrocities committed nearby by Saddam Hussein and his sons.

He points out seven brothers at different booths, all veterans from the Iran-Iraq war, and the reminders of the injuries they sustained &#8212; a missing eye, scars, chemical burn.

He knows the good guys and the bad guys. And they all know him.

Seely also knows exactly what&#8217;s for sale and the going rates for most things. He knows which vendors are honest.

And there&#8217;s always something going on to keep him busy, be it halting efforts to smuggle in beer or illegal items or dealing with unruly sellers looking for an edge.

While fighting in the war and patrolling the market are different missions, they do have at least one similarity, Seely said.