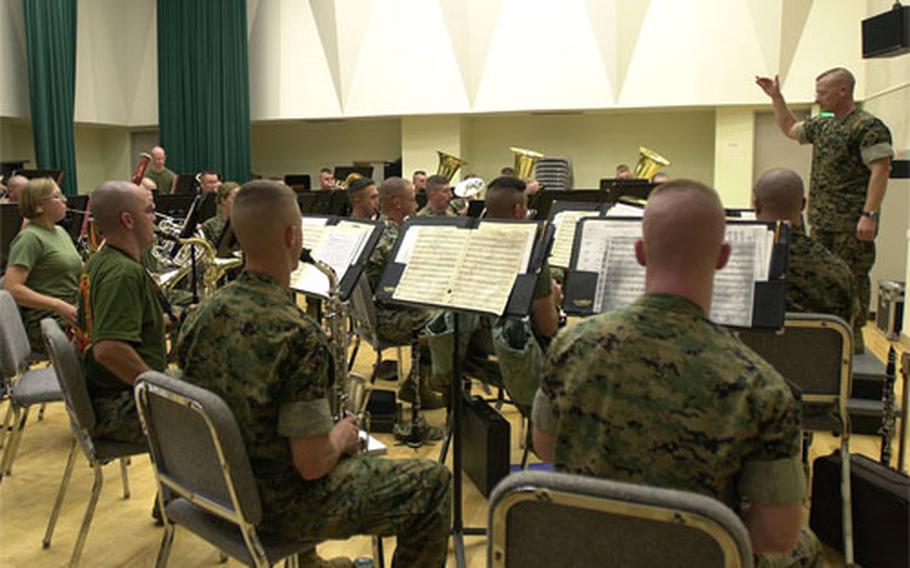 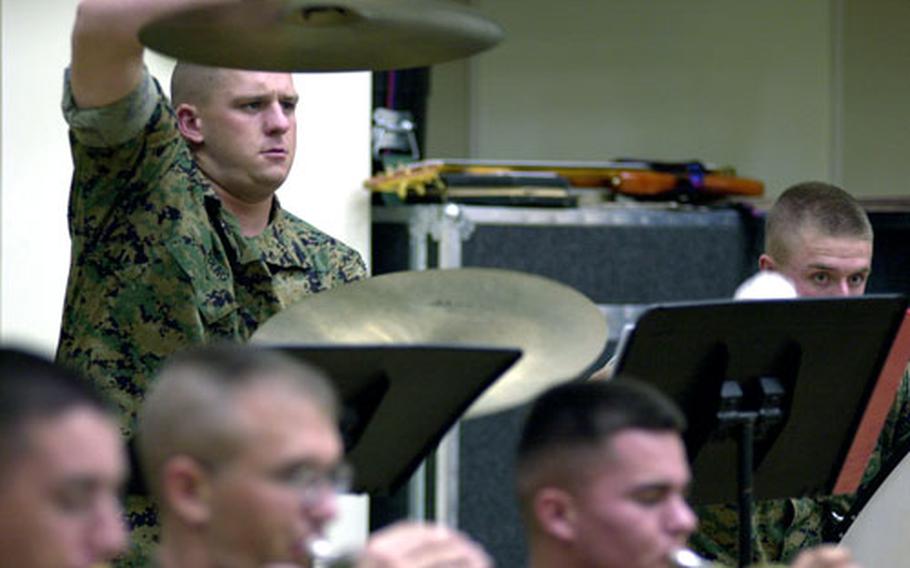 Cpl. Sean Young, a percussionist with the III MEF Band, prepares to strike the cymbals during a Friday practice at the band hall on Camp Foster, Okinawa. (Fred Zimmerman / S&S)

CAMP FOSTER, Okinawa &#8212; Members of the III Marine Expeditionary Force Band here have been practicing for more than a month for an upcoming annual concert with their Japan Ground Self-Defense Force counterparts.

The III MEF musicians will join the JGSDF 1st Combined Brigade Band Oct.21 for a 10th annual &#8220;Combined Concert&#8221; at the Ginowan Convention Center, according to Chief Warrant Officer 2 Benjamin Bartholomew, officer in charge of the III MEF Band. The two-hour concert will begin at 7 p.m. but Bartholomew recommended arriving about 30 minutes early because parking is limited. About 1,500 are expected to attend, he said.

About 65 musicians will be on stage throughout the night, said Bartholomew, who will be conducting his fourth combined concert here.

Bartholomew said he also enjoys the annual concert because he can select music he normally wouldn&#8217;t choose for the III MEF band alone.

The band has been preparing for the concert for about a month, Bartholomew said, and has had one rehearsal with the 1st Combined Brigade Band. A second and final rehearsal is set for Wednesday.

Tuba player Lance Cpl. Jacob Kallash, who joined the band just a month ago, said he didn&#8217;t expect to be playing in such a concert so soon.

Bartholomew wouldn&#8217;t disclose a great deal about the program but did say there would be some singing at the end, perhaps during an encore.

Dress for the concert is &#8220;open-collar casual,&#8221; Bartholomew said. Tickets to the free event are available at the III MEF Band Hall although Bartholomew said they are not required.