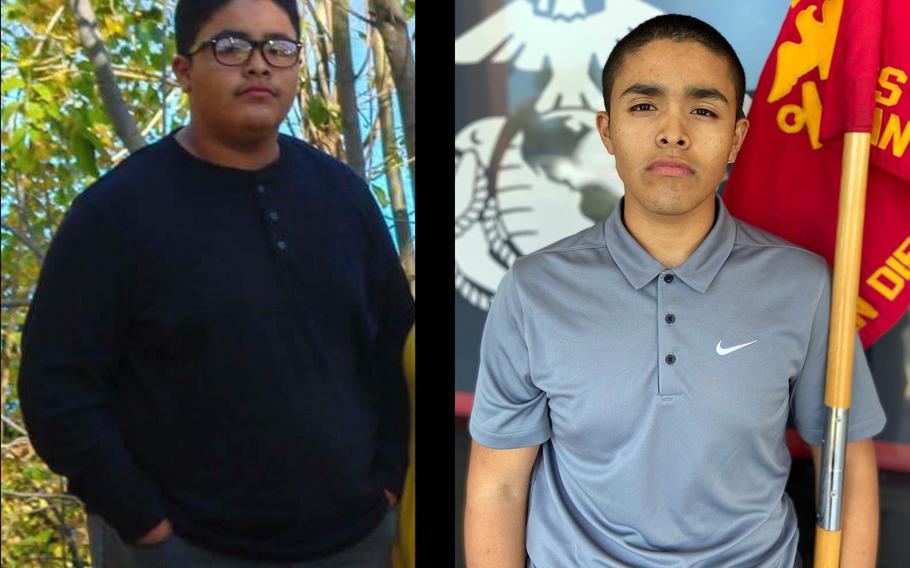 Gabriel Ramirez spent his childhood dreaming of being a Marine, but that dream seemed unattainable as a 365-pound teen nicknamed “Meatball.”

At the end of Ramirez’s sophomore year at Rancho Buena Vista High School in California, Marine recruiter Staff Sgt. Anna Rodrigues spoke to his class and later asked him about his interests.

“The kids I talk to, one thing I look for is heart,” Rodrigues said in a phone interview Wednesday. “I am looking for someone that won’t quit and will accept the challenge.”

The talk made a big impression, Ramirez, of Oceanside, Calif., said in a service statement prior to leaving for Marine Corps Recruit Depot San Diego.

“She looked at me, not at my weight,” Ramirez said in the statement. “She told me ‘It’s all up to you if you want it,’ and from there I got her card.”

In his junior year, Ramirez sometimes doubted he could both get in shape and improve his test scores enough to get into the service. But after he saw Rodrigues again, he visited Recruiting Substation Oceanside and worked out with the Marines there.

“I did my first workout with them and it killed me,” Ramirez said in the statement. “I ran a 26-minute mile and a half, I couldn’t do any pullups and I couldn’t even do 20 crunches. But they always encouraged me, motivated me and pushed me.”

Ramirez continued for a while, but at one point the obstacles in his life got to be too much, he said in the statement. He put all the weight he lost back on and stopped coming to work out.

Rodrigues called and asked what had happened, at which point Ramirez said he asked her why she was wasting her time with him.

“There were a lot of people that put Gabriel down, and I would tell him you can be upset about it or you can show them you won’t be the person they think you are,” Rodrigues said.

Rodrigues kept motivating him, at times texting or calling daily. Ramirez lost the weight, graduated from high school last year when he was 17 and has enlisted for an infantry job, Rodrigues said.

“She told me to stop doubting myself and just put my mind to what I want to accomplish,” Ramirez said. “I was the only one that could make this happen for me. No one could do it for me.”