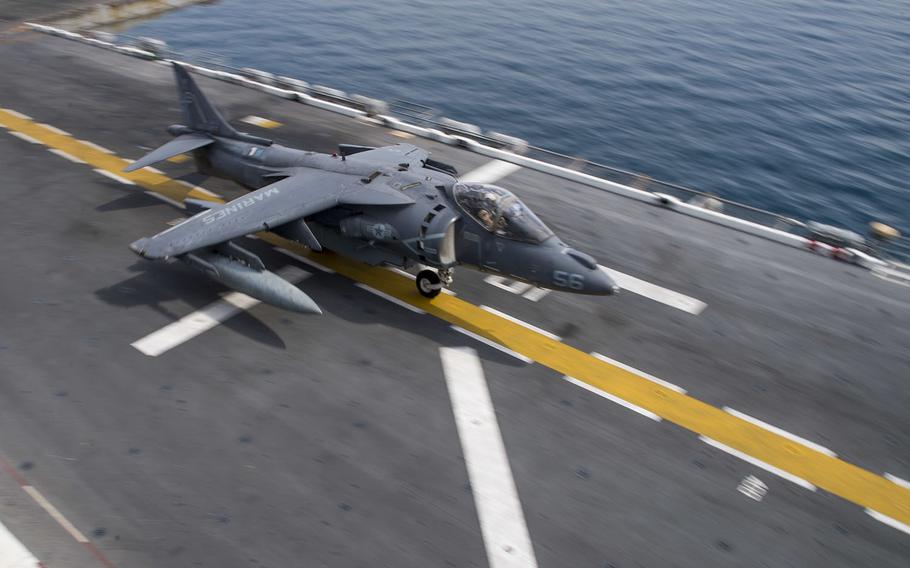 An AV-8B Harrier takes off from the flight deck aboard the amphibious assault ship USS Kearsarge on March 3, 2016. (Shamira Purifoy/U.S. Navy)

MANAMA, Bahrain — A U.S. Marine Corps jet was badly damaged after it caught fire last week on the flight deck of the USS Kearsarge in the Persian Gulf, a 5th Fleet spokesman said Tuesday.

Firefighters from the Kearsarge flight deck crew and 26th MEU helped the pilot out of the aircraft, McConnaughey said, and extinguished the fire within minutes.

Nobody was injured, but the aircraft sustained extensive damage, McConnaughey said.

The incident is currently being labeled as a Class A mishap, according to Military.com, which first reported on the incident. Those are defined as having fatality or permanent total disability and/or “$2 million or more in damage and/or aircraft destroyed,” a post on the Naval Safety Center’s website says.

According to a Naval Safety Center report updated March 10th, the Marines have had four aviation class A mishaps this fiscal year, including a night training flight collision of two U.S. Marine CH-53 Super Stallions in Hawaii in January that killed 12 Marines.

Previous incidents have led to questions about whether budget cuts are endangering troops by forcing cuts in maintenance and training.

The fire on the Kearsarge is currently under investigation, McConnaughey said.

Harriers generally provide sorties in support of the air campaign against the Islamic State in Iraq and Syria.