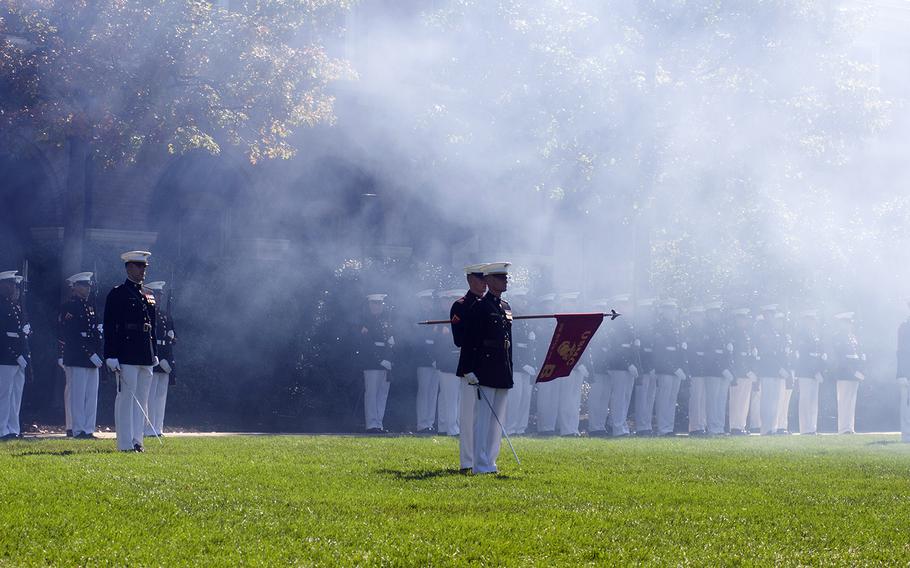 Marines attend a ceremony at the Marine Barracks in Washington, D.C., on Oct. 17, 2014. A Marine standing guard on Friday June 15, 2018, at the Barracks was transported to a local hospital with a gunshot wound, according service officials. (Meredith Tibbetts/Stars and Stripes)

WASHINGTON — A Marine who shot himself Friday morning while standing guard at the Marine Barracks in Washington was listed in stable condition at a local hospital hours after the incident, Marine officials said in a statement.

The incident appeared to be the result of a “negligent discharge,” a Marine official said. Investigators were looking into the incident and officials declined to comment further Friday.

The Marine Barracks, also known as 8th and I because of their location at the intersection of 8th and I streets in southwest Washington, includes the home of the commandant of the Marine Corps., Gen. Robert Neller. The commandant was not impacted by the incident, an official said on condition of anonymity.

The Barracks, in a popular section of Washington alongside several restaurants and bars, hosts “Evening Parades” on Friday evenings throughout the summer featuring the Marine Corps band, the service’s drum and bugle corps and its silent drill platoon. Friday’s parade was not expected to be impacted by the shooting, a Marine spokesman said.

Friday’s shooting appears to be at least the second such incident at the Marine Barracks in recent years. In 2013, a 19-year-old Marine died a day after shooting himself in the head at the Barracks. Police at the time ruled it was an accidental discharge.