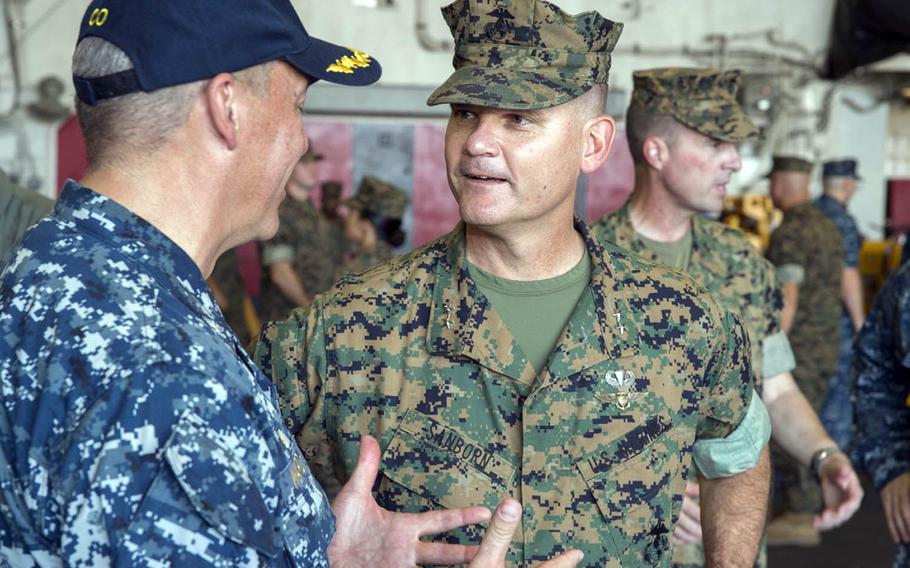 During Operation Desert Storm, then-Capt. Russell Sanborn had just pounded Iraqi military targets with gravity bombs in the southern Kuwaiti desert. Then a missile struck his AV-8B Harrier, forcing him to parachute into the same area, where the angry enemy waited.

Now a major general commanding the 1st Marine Aircraft Wing at Camp Foster, Okinawa, Sanborn uses his experiences as a POW to teach Marines the tenets of the military Code of Conduct and resiliency in all aspects of life.

“Everybody’s interested in a dramatic story, if that’s what you want to call this,” he said during a recent interview. “So what I try to do is tie it into Professional Military Education on our Code of Conduct,” which lays out the obligations and responsibilities of U.S. troops in captivity.

Sanborn’s training has become a hit with Marines and sailors in Okinawa, known as the “tip of the spear” for its proximity to China, Russia and North Korea.

“I put up the slides — here is Code 1; here is Code 2. We talk about what that code means, and then I relate it to my experience,” he said. “How did I personally apply that code? Or what did I think about with that code? And I give them the warts and all.”

After receiving his wings in October 1988, Sanborn was sent to Saudi Arabia in 1990 after Saddam Hussein invaded Kuwait. There, he was promoted to captain before Desert Storm began Jan. 17, 1991.

“I’m a brand new captain; I’d never been in combat,” he said. “It was exhilarating, challenging. But that’s what we were trained to do; that’s what we all signed up to do.”

Sanborn flew 16 successful missions in his Harrier before Feb. 9, 1991, when one of its wings was blown off. With the burning aircraft spinning out of control, Sanborn ejected.

“In my parachute I did a 360-degree spin,” he said. “It was just flat, brown desert. I’m under an orange-and-white parachute; I’m wearing a green flight suit. I had just dropped six 500-pound bombs on something down there, so they knew I was coming.”

Sanborn said his training took over. He tried to reach his wingman, but the survival radio didn’t work; neither did his emergency transponder. All he had was a pistol and 15 rounds.

The Marine aviator was picked up about 20 minutes later by a dozen AK-47-toting Iraqi soldiers.

Sanborn said he considered shooting it out. He also thought about saving the last round for himself.

Survival Evasion Resistance and Escape School “told me, ‘You’re worth more alive than dead,’ ” he said. He prepared for life as a prisoner of war.

Sanborn was first taken to the unit’s headquarters in southern Kuwait, where he was blindfolded and thrown into the back of a pickup truck. His final destination was Rashid prison in the heart of Baghdad, some 400 miles away. His captors allowed troops to use their fists, feet and rifles to take out their frustrations on him at each stop along the way.

Professional interrogations in Baghdad were particularly violent. He said his captors beat him so brutally, they ruptured both of his eardrums. In following the Code of Conduct, which instructs servicemembers to “resist by all means available,” he said he took pleasure in making the guards angry, even if it meant a beating.

“They’d say, ‘Don’t make any noise,’” he said. “So I had a tin plate that they would serve rice in sometimes and I would tap that thing on the cement floor and then they would come busting in the door … They’d throw you up against the wall; they’d kick you; they’d punch you; they’d threaten you. They would tell you, ‘No whistling,’ and I’d be whistling. After a while it’s like, ‘Wow, this is really starting to hurt.’ But I just received a lot of psychological value going, ‘Man, I just pissed them off.’”

In keeping with the code’s instruction to “evade answering further questions to the utmost of my ability,” Sanborn said he became a great actor. He pretended their blows hurt a lot more than they did. During one beating, he acted somewhat incapacitated, in too much pain to continue. The interrogation was suspended.

He was released and returned home to his family March 6, 1991.

Sanborn said he returned to duty with few psychological scars from his time as a POW. He went to Iraq twice during the second Persian Gulf War as he steadily climbed the Marine Corps aviation ranks. He also deployed to Afghanistan.

Now in Okinawa, Sanborn’s lessons are reaching a new audience, and they are having an impact. He has delivered lectures on how he used the Code of Conduct during his captivity at several Professional Military Education classes.

“The PME taught me that no matter what, no matter how hard you have it, you always stick to the Code of Conduct,” Gunnery Sgt. Lamont Finney said. “You have to remember that life can be worse, but that you can endure.”

“After I listened to the commanding general’s class, it helped me put things in perspective,” said 1st Lt. Richard Blair, Consumable Management Division officer in charge. “Now when my Marines come to me with issues, I know I can give them an example from within their chain of command of a Marine being faced with extreme hardship and finding the strength to pull through.”

Sanborn doesn’t dwell on his time as a POW but says he will draw on it if it will help others, especially when it comes to preventing suicide.

“You might have financial difficulties; ... you might be having marital trouble. Every person has these risk factors, and at that point in time, that’s a real problem to them, and sometimes Marines and sailors get overwhelmed by it,” Sanborn said.

“They focus in … and their answer is, ‘I’m going to kill myself.’ What I learned from this experience is that it’s all relative,” he said. “Right now, you’ve got to be able to see the future. There is a brighter future. So don’t hold it in. Break through that stigma. I know you think what you’re suffering from is bad. Trust me, I had 26 days of suffering, but there was light at the end of the tunnel … We’ve got a lot of support out there.”