Marine general to Congress: We might not be ready for another war 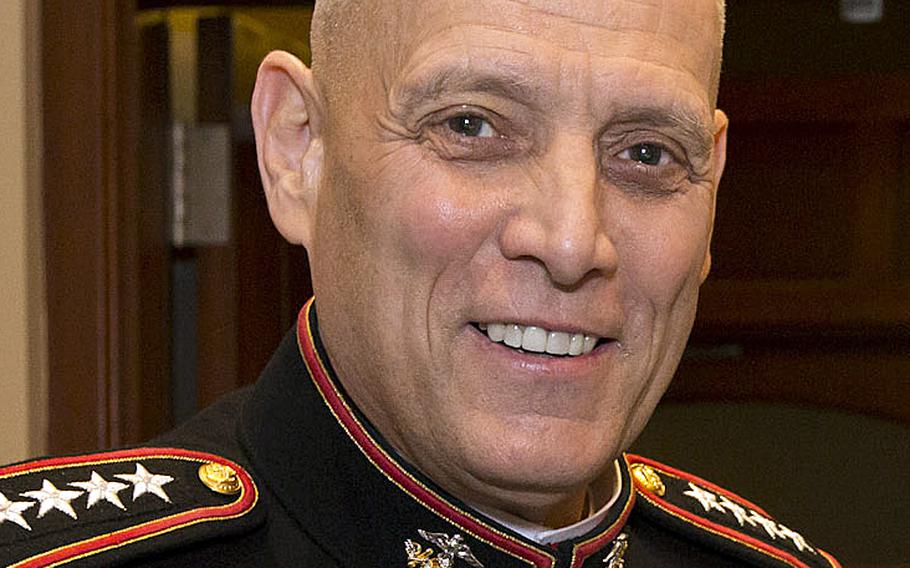 Assistant Commandant of the Marine Corp Gen. John Paxton speaks to Marines and civilians about the future of the Corps on Feb. 25, 2016, while visiting Marine Corps Recruit Depot Parris Island, S.C. Testifying before Congress on Tuesday, March 15, Paxton expressed concerns about the readiness of Marines to fight if called upon in an unexpected crisis. (Colby Cooper/U.S. Marine Corps)

WASHINGTON — If the Marines were called today to respond to an unexpected crisis, they might not be ready, a top Marine general told the Senate Armed Services Committee on Tuesday.

Gen. John Paxton, assistant commandant of the U.S. Marine Corps, testified to lawmakers that the Marines could face more casualties in a war and might not be able to deter a potential enemy.

“I worry about the capability and the capacity to win in a major fight somewhere else right now,” he said, citing a lack of training and equipment.

Paxton, along with the vice chiefs of the Army, Navy and Air Force, spoke to the Senate committee on the readiness challenges facing each service after 15 years of war and recent budget cuts.

For the Marines, he said units at home face the most risk because of fewer training opportunities with the best equipment deployed with forces overseas. And it would be these undertrained home units that would be called to respond to an unexpected crisis.

“In the event of a crisis, these degraded units could either be called upon to deploy immediately at increased risk to the force and the mission, or require additional time to prepare thus incurring increased risk to mission by surrendering the initiative to our adversaries,” Paxton said. “This does not mean we will not be able to respond to the call … It does mean that executing our defense strategy or responding to an emergent crisis may require more time, more risk, and incur greater costs and casualties.”

“All of our intelligence and communications battalions…would be unable to execute their full wartime mission requirements if called upon today,” he said.

The aviation units are faring no better, Paxton said. Approximately 80 percent of Marine aviation units lack the amount of ready aircraft that they need for training and to respond to an emergency, he said.

Paxton was repeatedly questioned about the Marines’ ability to respond to contingencies after the high number of training accidents its aviation squadrons faced in the last year. The collision of two Marine Corps’ CH-53 Super Stallions off the coast of Hawaii in January raised questions whether budget cuts were leading to a higher number of pilot and crew deaths.

On Tuesday, Paxton said the service is looking at whether there is a connection.