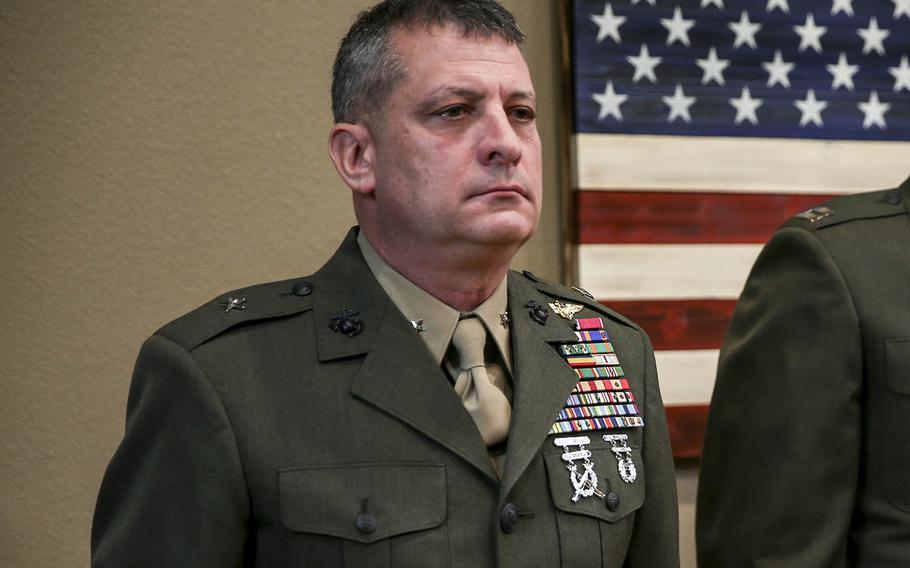 A Marine brigadier general who served as the director of an office that in part handles sexual assault prevention and response was removed from his position after making eyebrow-raising comments about sexual harassment claims at his command.

The Marine Corps announced Monday that Brig. Gen. Kurt Stein was removed as director of Marine and Family Programs and reassigned elsewhere “after an investigation into his remarks at an all-hands meeting April 6.”

USA Today reported last week that Stein had told an audience of hundreds at Marine Corps Base Quantico allegations that a male Marine officer at his command sexually harassed two women were “fake news.”

The unnamed officer was accused of showing the civilian employees that he was sexually aroused through his clothing on multiple occasions, according to USA Today. The claims have not been substantiated, but a new investigation into the matter was ordered last month.

Stein further joked at the all-hands meeting about a Navy chaplain recently fired for being caught on tape having sex in public in New Orleans last month, the newsspaper reported.

Marine Corps spokesman Lt. Col. Eric Dent said complaints about Stein’s comments were phoned in to an anonymous tip hotline April 9. A formal investigation into the concerns was initiated, during which Stein was suspended. The investigation was completed Friday.

He did not say where Stein is being reassigned.

“Leaders are responsible for establishing an environment conducive to mission accomplishment,” Dent said.

The Marine Corps has been under added scrutiny since March 2017, when it was revealed that some 30,000 people had joined a now-defunct Facebook group called Marines United, where active-duty and veteran Marines shared nude photos of female servicemembers and others, made derogatory comments about them and threatened some of the women.

Two commanders were fired in August in connection with the scandal, and more than 30 Marines faced reprimands from jail and involuntary separation to nonjudicial punishments and administrative actions.

Last month, Pentagon officials launched a new investigation into allegations that files containing hundreds of lewd photographs of servicewomen had been shared online in a Dropbox folder titled “Hoes Hoin’.”