Marine feels called to the priesthood 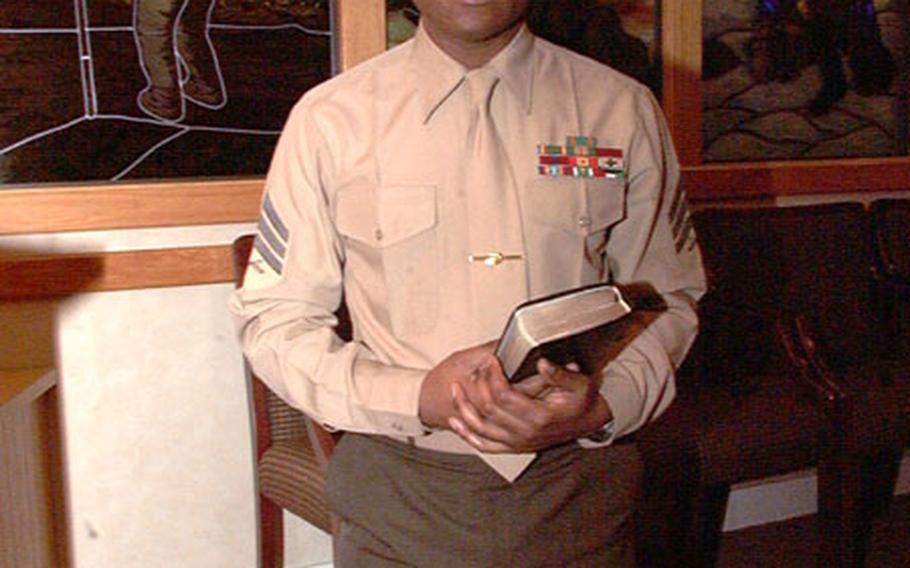 Sgt. Earl Lopez, 30, kneels for a photograph in the third-floor prayer room at the Pentagon. Lopez wants to become a Roman Catholic priest once he separates from the Marine Corps in two years. Since age 17, Lopez has been tugged by "the calling" to join the priesthood, an emotion he first fought. (Sandra Jontz / S&S)

Sgt. Earl Lopez, 30, kneels for a photograph in the third-floor prayer room at the Pentagon. Lopez wants to become a Roman Catholic priest once he separates from the Marine Corps in two years. Since age 17, Lopez has been tugged by "the calling" to join the priesthood, an emotion he first fought. (Sandra Jontz / S&S) In his office at the Pentagon, Sgt. Earl Lopez sometimes takes a break from his busy schedule by either saying the Rosary, a string of beads which Catholics use to say a set of prayers, or by logging onto to a Web site that features Catholic prayers. (Sandra Jontz / S&S)

Sgt. Earl Lopez has been two of the three, and it&#8217;s the latter which he now longs most to become.

The 30-year-old native of the Central American nation of Belize has felt since age 17 &#8220;the calling&#8221; to pursue a life of a Roman Catholic priest.

But the Marine spent the first part of the ensuing years struggling against the tug, because it displeased his mother, who better accepted her only child&#8217;s decision to join the military than the priesthood.

The disagreement has caused such tension between the two that Lopez didn&#8217;t want his mom interviewed for this story.

And nothing in life so far has changed his mind &#8212; including the recent sex scandals plaguing the church. In fact, they&#8217;ve only strengthened his resolve.

&#8220;The Catholic church teaches of faith, and to leave that would betray what was given to me as a gift. &#8230; But I am so upset with the bishops who did nothing, who let priests run amok within the church. I hold those bishops as accountable as the priests.&#8221;

The offenders belong in prison, he said without hesitation.

They found one. And an appreciative 18-year-old joined the Navy in an effort both to quench a desire for adventure and to return the favor.

&#8220;I&#8217;ve been given so much. America has one of the best forms of government, and the ideals of life, liberty and the pursuit of happiness must be defended.

He served four years in the Navy, entering as an undesignated seaman and leaving with the Military Occupation Specialty of storekeeper.

Lopez then learned he wasn&#8217;t self-disciplined enough for college life. Frustrated, he left the world of academia after two semesters at Tuskegee University in Alabama.

Military life suited him and he longed for it, so in 1997, he rejoined, this time going into the Marine Corps.

Today, he&#8217;s an administrative clerk for John Young Jr., the Navy&#8217;s undersecretary for research, development and acquisition. It&#8217;s a job that runs the gamut from coordinating government travel to escorting high-level dignitaries and representatives from the defense industry to the Pentagon to answering the phones.

Lopez has two years remaining on his commitment to the Corps. Following separation, he plans to enroll at a seminary.

Until then, he prepares himself by seeking counsel from a military chaplain, who also is a Catholic priest.

He helps Lopez find answers to things troubling the Marine, such as the brewing storm of sexual misconduct by priests and why the church prohibits women from ministering.