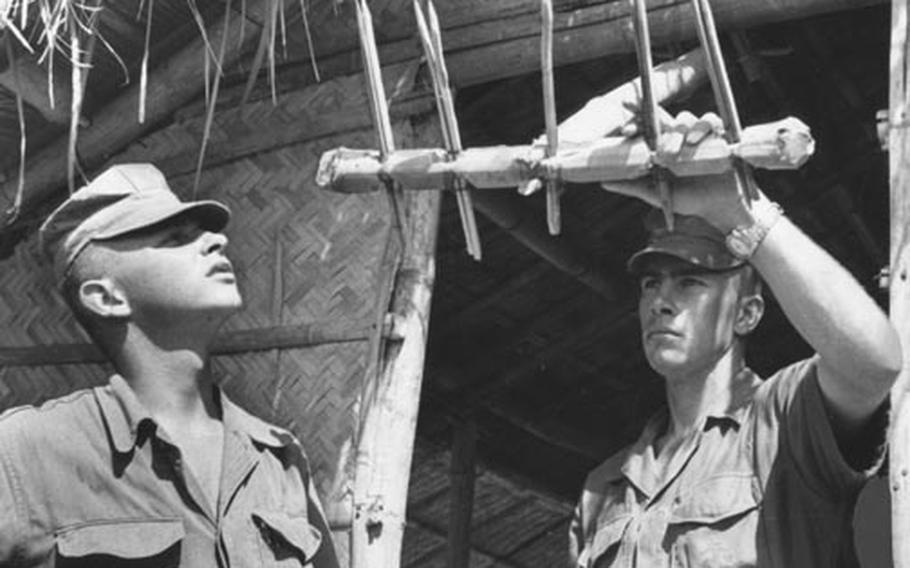 DA NANG, Vietnam &mdash; A Marine with a full bandoleer of ammunition might think he wouldn't miss one lost round &mdash; but there's a school here that shows him how it could cost him his life.

The 3d Engineer Bn.'s Demolitions and Mine Warfare School has crude, bamboo-type bullet mines captured from the Viet Cong. It uses these and other types of mines and booby traps as training aids.

The cartridge trap shows at a glance how one bullet can be deadly when the Viet Cong use their ingenuity and crude materials to kill American servicemen.

Some 2,500 Marines have been through the school, which has four different training courses. There's an elaborate 3-day course for engineers, standard and special courses for infantrymen and an accelerated 1-day course for support units like drivers, cooks, bakers and mail clerks.

The school, also known to Da Nang Marines as the "punji palace," has a mock-up Vietnamese Village, built mostly by Vietnamese laborers, for added realism. The village is complete with thatched huts, animal stalls, hay stack, fences and gates. All are mined or booby-trapped with explosive charges, grenades and various punji stick traps.

Students quickly spot a grenade rigged on a fence gate when they approach the school's training area.

But Sgt. Henry D. Halloway, of Ypsilanti, Mich., explains that they have been victimized by the VC "double-bluff" as he points out a second trap that could have killed them. Some gates, said Halloway, have as many as four different traps.

The school emphasizes that the best defense from guerrilla traps is to outwit them. The Viet Cong set up only so many traps and he plants them where he thinks his enemy is most likely to go.

Punji spikes are whittled from bamboo, tempered like steel over fire, dipped in human or water buffalo excrement and planted to impale and infect its victims.

Trip wires are stretched across paths and when a passing trooper walks into one, a signal flare or a booby trap is sprung.

Guerrilla warfare has little resemblance to conventional combat. Mines and traps are primitive and never placed in the logical minefield patterns that new replacements expect.

The Malayan Gate, also known as the whip trap, is deadly no matter which way a trooper approaches it &mdash; and it whips around so fast he has no time to escape.

A steel arrow trap shoots a poisoned arrow out of the ground when its trip wire is activated. Mined trenches are detonated by remote control just as the enemy approaches.

When setting a grenade trap, the guerrilla pulls out the retaining pin and leaves the grenade so the enemy knocks the handle off. A potential victim can hear the pop of the fuse igniting and, if he is fleet-footed enough, he has four seconds to take cover.

Grenades are often placed in C-ration cans. The pin is pulled and when the trip wire jerks the grenade out of the can, the handle drops off and it explodes.

The Viet Cong often plant grenades under the bodies of their own corpses. When an American turns the body over to search it for documents, the grenade goes off. They also conceal grenade traps behind or around anti-American signs. When a disgruntled American serviceman tears it down he is blown to bits.

Spike traps are also ingenious. They are often used in tin cans with punji spikes or alternating jaws of iron barbs in foot snares.

Punji tilt boards can fly up out of nowhere at a victim's face and chest.

Since the Viet Cong make extensive use of mines and booby traps they need and use a system of marking their emplacements to prevent their own forces from being caught in the traps.

The 3d Engineer Bn 's school is also on to the marking system.

There are other signs in use by the Viet Cong and the instructors of the demolitions and mine warfare school know the majority of them.