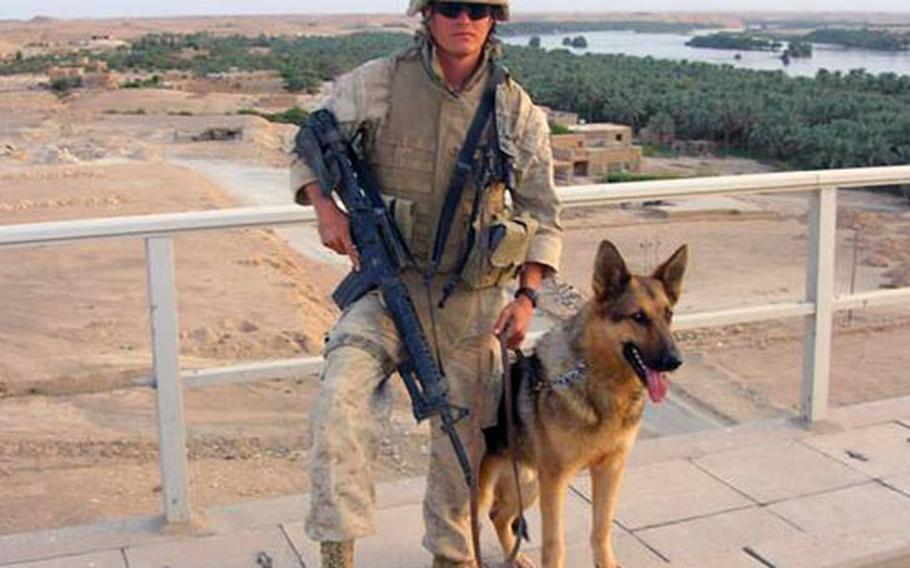 Marine Sgt. Adam L. Cann, who was killed in a suicide attack in Ramadi on Thursday, is remembered by fellow Marines as a consummate professional. “I never met a better Marine doing what he did,” one of his fellow dog handlers recalled. (Courtesy of Joseph Manning)

RAMADI, Iraq &#8212; Marine Sgt. Adam L. Cann had less than two months to go before he finished his second tour in Iraq, and the 23-year-old military dog handler told friends that he and his trusty German Shepherd, Bruno, would be right back for a third.

Cann, a native of Davie, Fla., died Thursday as he was helping to control crowds outside of an Iraqi police recruitment and screening center at the sprawling Ramadi Glass Factory. He was attached to the 2nd Military Police Battalion, 2nd Force Services Support Group, the Marine Corps said.

A disturbance had broken out among hundreds of police volunteers late Thursday morning after warning shots were fired at an approaching vehicle. Cann, Bruno and two other dog handlers and their hounds had just helped to restore order before a suicide bomber detonated an explosives vest, killing Cann, Army Lt. Col. Michael E. McLaughlin, 27 Iraqi police volunteers and two Iraqi army soldiers.

The blast also injured the two other dog handlers and their dogs.

Bruno suffered injuries as well. He will be flown back to the U.S. for treatment and returned to service if he fully recovers.

On Sunday, friends described Cann as a dedicated and knowledgeable dog handler who could never sit for very long inside camp. He was happiest when he and his dog were outside the wire, hard at work, they said.

While military dog handlers back in the U.S. usually place their dogs in kennels for the evening, handlers in Iraq live with their animals full time. &#8220;They&#8217;re kind of like house pets &#8212; they sleep on your bed, you feed them beef jerky,&#8221; Swartwoudt said.

Military dog handlers in Iraq are a small but close-knit group, and word of Cann&#8217;s death left them stunned. Their mission is to assist in crowd control and raids and to sniff out explosives.

Cann&#8217;s friends said that up until recently, their tours had been without serious injury or death. This deployment, though, has been different. In addition to Cann&#8217;s death, another dog handler was shot by a sniper two months ago. He survived.

Treille and Swartwoudt were planning a memorial service for Jan. 14. On a laptop computer, they clicked through photos of Cann and Bruno on missions and playing around.

Cann told them that when he finished with the Marines, he was considered moving back to Florida to open up a restaurant with his brother &#8212; a bar and grill.

Up until a few days ago, though, Cann&#8217;s retirement from K-9 operations seemed a long way off.