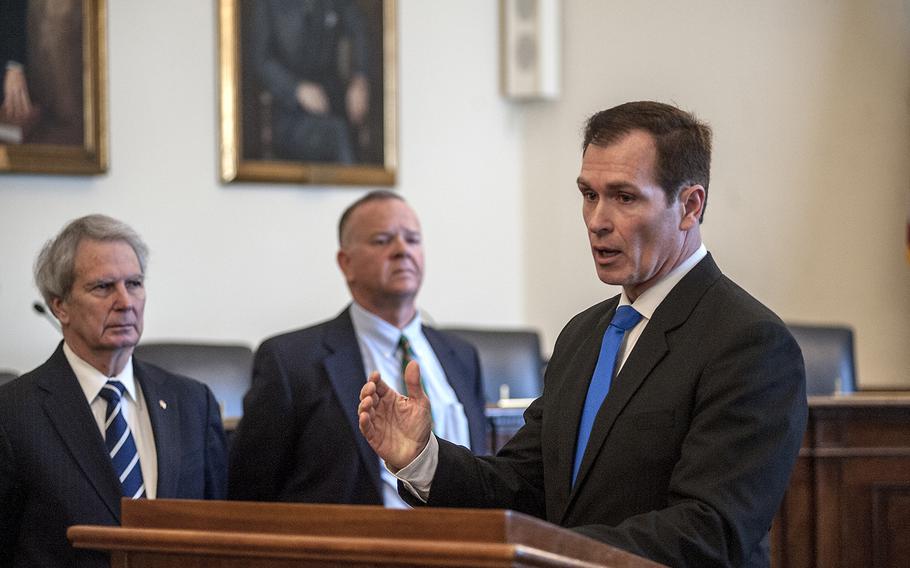 Buy Photo
Retired Marine Maj. Fred Galvin speaks during a briefing on Capitol Hill in February 2017. Galvin was the commander of a Marine Corps special operations unit in Afghanistan and was accused of firing indiscriminately after a car bomb attack on March 4, 2007. Galvin was exonerated and now has been recommended for a higher rank in retirement, with back pay. (Carlos Bongioanni/Stars and Stripes)

A retired Marine Corps officer whose career was damaged after his unit was falsely accused in 2007 of war crimes in Afghanistan should have his rank elevated and be awarded back pay for damages, a Navy board has determined.

The Navy’s Board for Correction of Naval Records determined there were extensive errors in performance reports for Maj. Fred Galvin stemming from a 2007 firefight in Afghanistan and a separate review in 2011. As a result, Galvin was passed over for promotion to lieutenant colonel.

The board, in an October ruling that was approved Wednesday by the Navy, recommended that Galvin be assigned the retired rank of lieutenant colonel and receive commensurate back pay.

The next step is for a special selection board to assemble and make a final determination on the promotion, according to the Navy board’s report.

Galvin said his ultimate hope is to return to uniform after being forced into retirement in 2014.

“I would like to continue to serve,” Galvin said. “God bless the people on this (board) for standing up for us. This is a huge step forward.”

For a decade, the Marines of a special operations unit called Fox Company have been dogged by allegations of misconduct in connection with the death of civilians in Afghanistan.

In 2008, Galvin and his company were cleared of wrongdoing by a military court of inquiry. But members of the unit struggled to clear their reputations, which they say were tarnished by initial news reports of civilian carnage and a lack of subsequent support from the Marine Corps.

The 2007 incident in Afghanistan involved Marines patrolling in the Bati Kot district when their six-vehicle convoy was attacked by a car bomb and then ambushed. A firefight ensued and news stories quickly surfaced that the Marines had targeted and killed as many as 19 Afghan civilians.

“We saw no civilians killed at all,” Galvin said during a congressional hearing in 2017 focused on clearing the names of Marines.

At the time of the ambush, the U.S. military was under pressure to minimize civilian casualties as part of its campaign against the Taliban. The incident sparked a street protest, condemnation from former Afghan President Hamid Karzai and threatened to complicate the war effort.

The Marines were pulled out of the country and the Pentagon publicly apologized for the incident even though an investigation was underway.

While the Marines were later cleared, some of their careers suffered, including Galvin’s.

In addition to correcting performance reviews from the 2007 incident, the Navy board also called for another correction in Galvin’s record from 2011 when he was relieved of duty for questioning his commander’s excessive use of ordnance during a deployment in Afghanistan. The incident resulted in a career-ending performance review.

The Navy board determined that Galvin was correct to challenge the commanding officer’s “demonstrated disregard for Marines and Afghan civilians through his choice of weapons systems,” the report said.

“Punishing a Marine for doing the lawful and morally correct thing is simply unjust,” the Navy board said.

Meanwhile, Galvin said the Corps’ continued failure to speak up publicly in defense of Marines is damaging.

“When this kind of stuff happens it is a moral hazard,” Galvin said. “God bless these people on the panel for standing up. This is a huge step forward.”