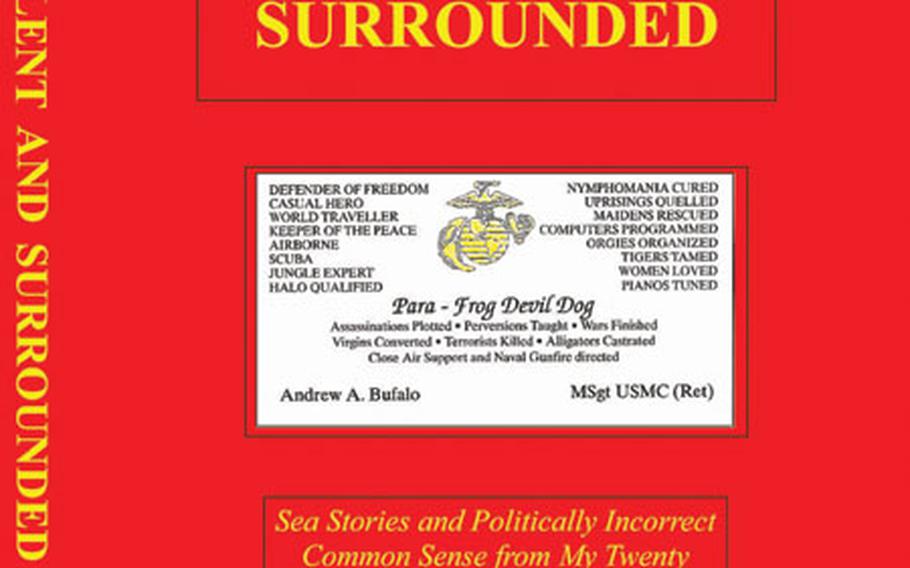 Actually, he&#8217;s got 130 stories to tell. But his most important story is the one about a guy who wanted to help families of Marines killed in a training accident.

Bufalo recently wrote a book called &#8220;Swift, Silent and Surrounded.&#8221; It&#8217;s a collection of sea stories, he said in a telephone interview from his home in Tampa, Fla.

It&#8217;s an idea Bufalo bounced around for years while in uniform, but events just days before he retired in 1999 kicked plans into high gear.

As Bufalo was set to retire, a CH-46E Sea Knight crashed into the Pacific Ocean, killing seven Marines, five of them from Bufalo&#8217;s unit.

&#8220;I considered three of them to be good friends,&#8221; Bufalo said. &#8220;Just prior to going aboard USS Bonhomme Richard they were joking with me about my retirement and saying how much they were looking forward to having a beer with me on my last day.&#8221;

Instead, a captain came to Bufalo while he was packing in preparation for his retirement and told him the news. Bufalo retired the following Friday, but stuck around the weekend for the Monday memorial service.

The Force Reconnaissance Association set up a fund to aid the families of the fallen Marines. The outpouring was sincere, but considering most donors were retirees, donations were limited. Bufalo decided his book needed to be done and the proceeds should go to the widows and children.

&#8220;It bothered me to see the families of stockbrokers getting so much support when those left behind by my friends got so little in comparison,&#8221; he said, comparing the Marine funds with that of the Sept. 11, 2001, terror attack victims, &#8220;especially since they were serving their country when it happened and put their lives on the line every single day.&#8221;

The book is written in 14 chapters, one for each of the Corps&#8217; leadership traits. Stories accompany each of the traits, explaining what&#8217;s admirable about the trait.

But not every story is combat. Bufalo chose a story about a boy visiting a recruiter to highlight courage. A recruiter received a call about a young man who dreamed of becoming a Marine all of his life. The recruiter, expecting a strapping young man, instead was greeted by a wheelchair-bound teen, born with a debilitating condition who already had outlived his life expectancy.

&#8220;He had a serious disease, but he showed so much courage that he and the Marine recruiter ended up becoming good friends,&#8221; Bufalo said. &#8220;He was made an honorary Marine by President Reagan and when he died, was buried with military honors.&#8221;

Other entries include accounts of war in Vietnam, and deploying to Kuwait and Iraq. Being able to put the book together for the benefit of families of fallen comrades, though, was the most compelling and most satisfying portion of the project.