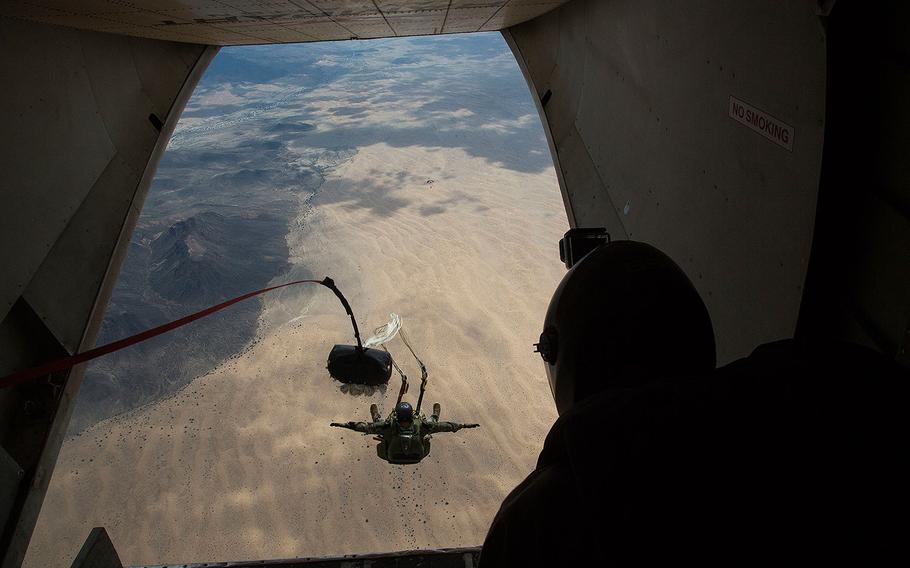 Cpl. Alejandro Romero was killed during a double-bag static line jump at the Multi-Mission Parachute Course in Coolidge, Ariz., according to a Marine statement. He was attending the 10-day course while assigned to the Marine Corps School of Infantry West at Camp Pendleton in California.

The Marine Corps launched an initial investigation into the incident following Romero’s death and suspended double-bag static line jumps, Marine officials said. The investigation will be followed by a Safety Investigation Board probe and include expert evaluations. A Marine spokesman said it was not clear how long the jump suspension could last.

A static line jump means the parachute release is attached to the inside of the aircraft via a cord, which opens the parachute automatically once the jumper exits the airplane and it is pulled, according to the Marine Corps. In a double-bag static-line jump, multiple types of parachutes are deployed.

Romero was a reconnaissance scout from Carson, California who had been assigned to the 3rd Recon Battalion in Okinawa, Japan, according to the Marines. His awards included the National Defense Medal, Global War on Terrorism Service Medal and the Sea Service Deployment Ribbon.

Family members on social media described him as a newlywed who was a “good person with a big heart.”

His brother, Fernando Romero, told CBS 5 in Phoenix, Ariz., the young Marine had always wanted to join the military.

“My brother was always a happy person, he was very humble,” he told the television station. “He was a great person, a great human being.”